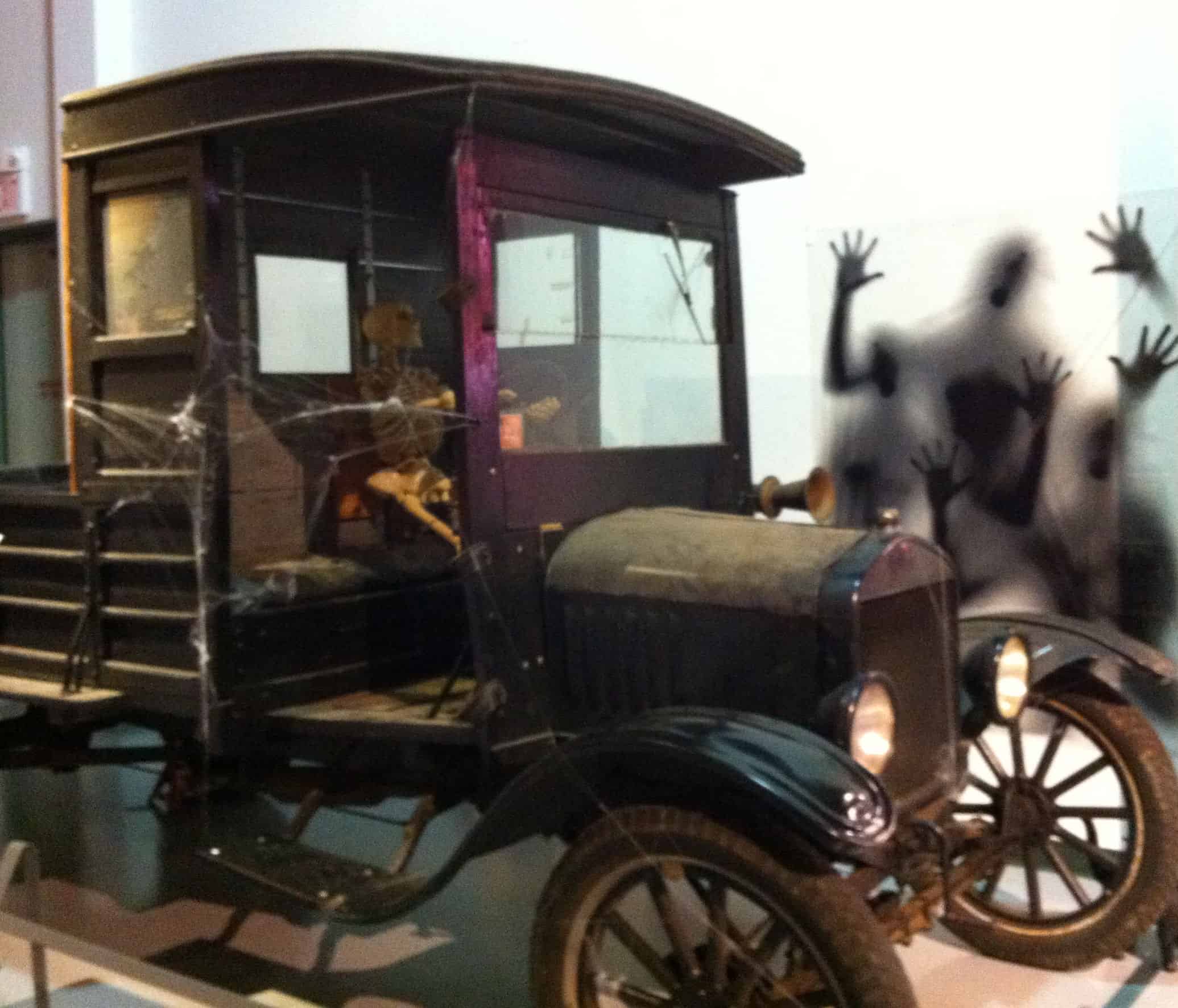 Two spooky custom creations lurk within the lobby of the LeMay – Americas Car Museum in Tacoma, Washington, through the end of the month. The creations, “Tomb for Two” and “Twisted Evil,” were built by Mike Fobes, a master builder, fabricator and mechanic who has been inducted into the Automotive Hall of Fame in Detroit.

Alongside the “Tomb for Two” is “Twisted Evil,” a 10-foot long four-wheeled motorcycle powered by a Mazda rotary engine rated at 175 horsepower. While a show bike, “Twisted Evil” is street legal and reputedly capable of 200 miles per hour.

Halloween candy will be shared October 22 at the AACA Museum and October 30 at the California Automobile Museum and the America on Wheels museum.

The World of Speed Museum in Allentown, Pennsylvania, holds Trunk-or-Treating during the museum’s Spooktacular Halloween Celebration on Saturday, October 22, from noon to 4 p.m. The event includes a costume parade and a pumpkin race.

The  NCM Motorsports Park holds a Trunk or Treat car show on Tuesday, October 25, from 4-6 p.m.

Today, the AACA Museum in Hershey, Pennsylvania, holds Cars and Coffee from 7:30 to 10 a.m.

The last Cruise-In night of the season at the LeMay – Americas Car Museum, takes place October 13 from 5 to 8 p.m. on ACM’s Haub Family Field.

The Automotive Hall of Fame in Dearborn, Michigan, co-hosts a car show October 9 with East Michigan Car Meets, and has a Cars and Coffee scheduled for October 15.

The Blackhawk Museum holds Picnic on the Plaza for pre-war classic vehicles October 9 and ita second annual All British Car Meet on October 15. The All British meet is supported by the Mini Owners of America San Francisco chapter.

October 15 is the inaugural Toy & Model Car Show and People’s Choice Contest at the America On Wheels Museum in Allentown, Pennsylvania. The show will be held from 10 to 4 p.m. and includes show stock, custom, race car, street rod, truck and classics.

World of Speed Museum members are to meet at noon by Door 1 on October 16 for an easygoing cruise to the French Prairie Gardens pumpkin patch. Admission to the pumpkin patch and corn maze is $5.

To show appreciation for those who have served in the military and for members of the Warrior Transition Battalion from Fort Knox, the National Corvette Museum in Bowling Green, Kentucky, invites veterans to visit the museum November 3-5 for the annual Vets ‘n Vettes celebration. The weekend includes laps and rides in Corvettes at the NCM Motorsports Park, museum tours, Corvette plant tours, road tours, a poker run, banquet and participation in the Bowling Green Veteran’s Day Parade.

Sunday, the America on Wheels Museum holds a “fire prevention day” from 1. to 3 p.m. with art activities, safety drills, and “Bert and Ernie Skits on fire.” Participants will have the opportunity to take a photo alongside a Mack fire truck.

The Seal Cove Auto Museum in Maine holds a masquerade ball on October 22 from 7 to 10 p.m.

The World of Speed Museum in Wilsonville, Oregon, holds the “simulator race series” on October 27 from 5:30 to 8 p.m.

Saturday, the Simeone Museum in Philadelphia holds a Targa Florio Demo Day to celebrate Sicily’s mountain road race. The cars demonstrated will be a 1925 Alfa Romeo RLSS, a 1926 Bugatti Type 35, and a 1975 Alfa Romeo 33 TT 12.

At noon October 9, the Auburn Cord Duesenberg Museum in Auburn, Indiana, presents a 1908 Zimmerman in the museum’s “If These Cars Could Talk” series.

The World of Speed Museum holds Les Schwab Workshops on Saturday, October 15 from 10:30 to 11:30 a.m. The workshop will go over how to prepare your car for the rainy and snowy winter months ahead. All supplies will be provided, though the museum asks participants to register for the free event.

The Kansas City Automotive Museum will explain basic car maintenance, during the back-to-basics workshop, set for October 30 from 1 to 4 p.m.

The Blackhawk Museum continues its Fall Speaker series on November 5 with author and barn-find hunter Tom Cotter. On November 12, the 1986 Indy 500 winner Bobby Rahal speaks at the museum.