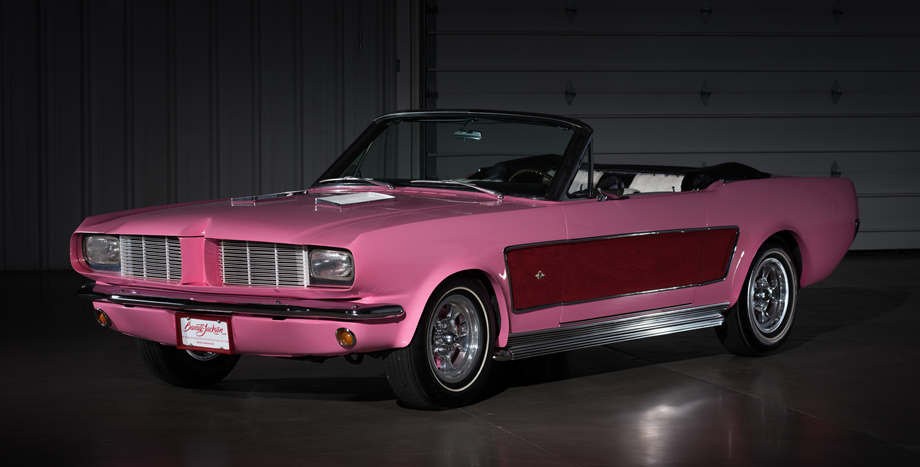 Editor’s note: This is the 25th in a 30-day series featuring cars from the Tammy Allen Collection to be sold October 13-15 at Barrett-Jackson’s 2016 Las Vegas Auction.

In 1965, Sonny and Cher burst upon the music scene with their debut single, I Got You Babe, which helped propel their debut album, Look at Us, to the No. 2 position on the Billboard chart, where it remained for eight weeks.

Ford felt the enthusiasm and vitality displayed by Sonny and Cher embodied the growing youth culture that Ford had captured with its Mustang. As a result, Ford pulled two 1966 Mustang convertibles with nearly consecutive serial numbers from the San Jose, California, assembly line for the singers, sending them to George Barris, the legendary “King of Kustomizers,” to personalize reflecting the on-stage personas.

To be sold as a pair without reserve from the Tammy Allen collection during the Las Vegas Barrett-Jackson auction, the cars have their factory-installed 289cid small-block V8 engines as well as a C4 automatic transmissions.

The cars got 40 coats of lacquer paint, a Barris trademark. Sonny’s car is in Murano Gold Pearl with an orange and gold fade-away treatment over the wheel wells and grille openings highlighting a set of custom five-spoke Raider wheels. Cher’s Mustang features a Hot Pink Pearl finish blended with Candy Red paint and a matching fade-away treatment that highlighted the Raider wheels designed for her in an intricate multi-spoke pattern.

Both cars are fitted with 3-inch Mouton fur carpeting, Sonny’s in gold, Cher’s in hot pink.

Restorations were endorsed by George Barris and each Mustang shows low mileage. The cars also come with an extensive collection of Sonny & Cher memorabilia.

This pair of “Sonny and Cher” 1966 Ford Mustang custom convertibles and the rest of the Tammy Allen Collection will be crossing the block at no reserve as part of Barrett-Jackson’s ninth annual Las Vegas Auction, October 13-15 at Mandalay Bay Resort & Casino. For more information, visit www.Barrett-Jackson.com/Bid or call 480-421-6694. Absentee bidding options powered by Proxibid are also available.