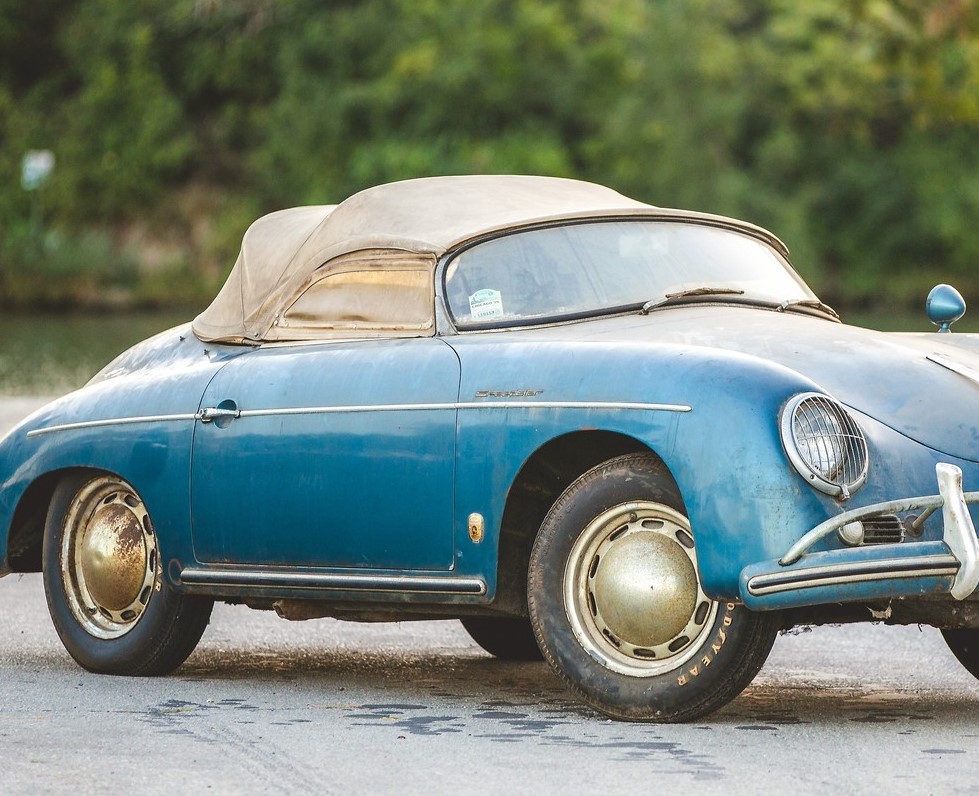 Two Porsche sports cars from opposite ends of the collector car spectrum, a 1957 356A 1600 Speedster “barn find” in picturesque condition and a 2004 Carrera GT in brand-new condition, will be offered by Auctions America during its Hilton Head Island sale November 5 in South Carolina.

The auction takes place during the Hilton Head Island Motoring Festival & Concours d’Elegance. The sale is described by Auctions America as a “boutique event” with just 120 cars up for bidding, a small number by the auction company’s usual standards.

The Speedster was pulled from a Chicago-area garage after 40 years of storage and was found in remarkably original condition after being driven by its original owner for nearly 20 years, and then parked. After the original owner’s death about five year ago, the Porsche went to his best friend, who just recently brought it out into the daylight.

Still in its Aquamarine Blue Metallic paint with Beige Leatherette interior and tan fabric roof, the Porsche has an estimated value of $200,000 to $250,000.

“This time-warp Porsche 356 is a true gem,” Donnie Gould, president of Auctions America, said in a news release. “As more Porsche Speedsters are found and restored, it is becoming nearly impossible to find such an original car, let alone one that comes from almost six decades in single ownership. With collectors still drawn to highly original, unmolested cars, we expect it will attract plenty of interest when it crosses the podium in November.”

The Carrera GT seems just as magical, with only 24 miles on odometer, making it essentially a new car despite being 12 years old. The V10-powered mid-engine supercar, capable of 0-60 in four seconds and a 200 mph top speed, is one of just 1,270, and one of only 604 that came to North America.

The single-owner car, which was delivered new in Ohio, is believed to be the lowest-mileage privately owned Carrera GT in existence. The car’s estimated value is $850,000 to $950,000.

“There’s been a definite rise in demand for modern supercars over the past 18 months, with limited, low-production examples particularly sought after by collectors,” Gould said. “When it comes to these cars, low mileage, single-ownership and great maintenance history are crucial. This example checks all those boxes – a virtually new car, it is by far the lowest mileage example to come to public auction in recent history.”

Other highlights of the Hilton Head auction, according to Auctions America, include: