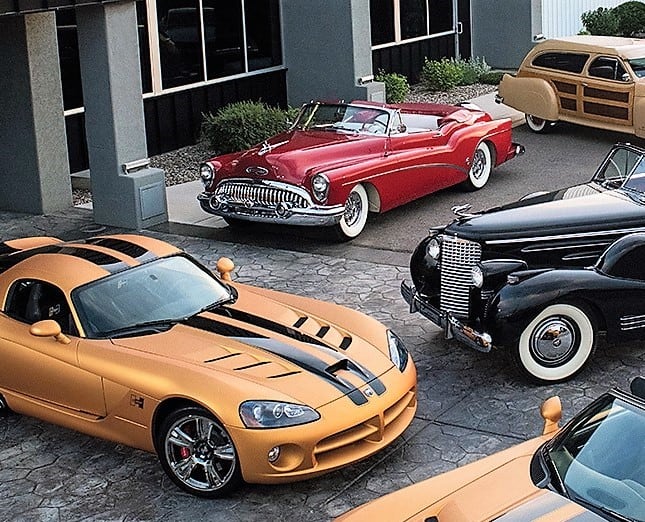 Tammy Allen was a familiar face in the front row of Barrett-Jackson auctions for many years, one of the few female collectors who made an impact on the auction arena and the classic car world as a whole.

For more than three decades, Allen built her unique collection. In 2010, she opened a museum – Allen Unique Autos in Grand Junction, Colorado – to showcase her more than 80 distinctive automobiles and her trove of automobilia.

But Allen closed her museum last year after the tragic death of her 36-year-old son, Landon Allen, and her mother’s cancer diagnosis. Those events changed Tammy Allen’s priorities and led her to consign her cars to Barrett-Jackson’s ninth annual Las Vegas auction October 13-15.

The Tammy Allen Collection will be highlighted at the Vegas auction, where about 750 classic, exotic and custom cars are scheduled to cross the block at Mandalay Bay Resort during the three-day sale.

“We have the Tammy Allen collection, 82 cars at no reserve,” Craig Jackson, chairman and chief executive of Barrett-Jackson, said in an interview with Classic Car News.

“She has a pretty diverse collection,” Jackson added, pointing out such cars as an early Jaguar E-type 3.8 roadster and a pair of uniquely customized ’66 Ford Mustang convertibles that George Barris built for singing couple Sonny and Cher.

Among Tammy Allen’s other cars:

The Vegas auction also will present a taste of another large car collection, the impressive Charles Thomas collection of about 150 cars. Although the total sale of those cars doesn’t happen until the Scottsdale auction in January, Barrett-Jackson plans to offer a few of them in Las Vegas:

“We’re selling six of his cars in Vegas as sort of a teaser for what’s to come in Scottsdale,” Jackson said, adding that more collections are expected for Scottsdale. “We’re on a roll with collections.”

Barrett-Jackson will have a new footprint at Mandalay Bay this year, moving the entire event into the resort’s convention center, including the auction arena, exhibitors, sponsors and car displays, Jackson said.

“They added a half million square feet,” he added with a laugh. “That’s Vegas. It’s not there one day, the next day it is.”

The new layout should make it easier for auction-goers to experience the whole affair in one location, Jackson said.

“Everything is in one concentrated area,” he said. “It’s a little different. I think you will see a lot of flow, a lot of excitement in the building.”

The block action also should be exciting this year with an upgrade in the selection, he said. “I think we have only eight cars with reserves, so it’s gonna rock.”

With the addition of the Mohegan Sun auction in Connecticut, which happens in June and took the place of the disbanded Hot August Nights auction in Reno, Nevada, Barrett-Jackson’s schedule of four auctions (including Palm Beach, Florida, in April) are now evenly spaced and easier to manage, Jackson said.

Even though the Las Vegas auction will have some 750 cars this year, up from last year’s 700, Jackson said sales each day will be conducted early enough so the sellers, buyers, guests and crew can enjoy other Vegas attractions.

“We start a little earlier and the goal is to get everybody out of there so they can go and enjoy the evening,” Jackson said.