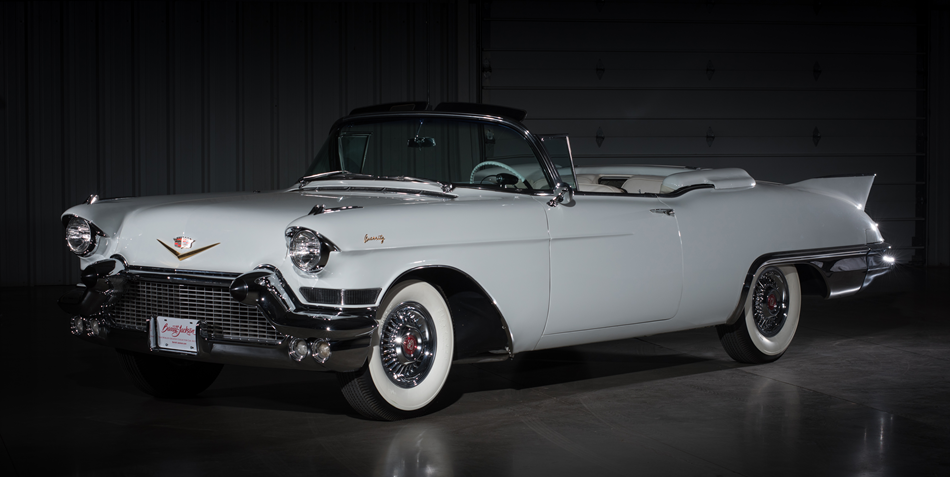 Editor’s note: This is the 20th in a 30-day series featuring cars from the Tammy Allen Collection to be sold October 13-15 at Barrett-Jackson’s 2016 Las Vegas Auction.

Introduced in 1953, the Cadillac Eldorado was the automaker’s launch into the new era of automotive design, demonstrating again the brand’s dominance in the growing luxury car segment.

The name is a contraction of two Spanish words which translate to “the gilded (golden) one,” and also refers to El Dorado, the mythical lost city of gold. The car received its name as a concept car designed to celebrate Cadillac’s golden anniversary.

Eldorado’s produced between 1957 and 1960 are regarded at the car’s third generation of production and included convertible and hardtop versions, known as the Seville and Brougham editions. The Eldorado Brougham models were the most expensive cars offered by Cadillac during those years.

Designed by Ed Glowacke, the Eldorado Brougham was a hand-built car that featured quad headlights and wide ribbed lower rear quarter panels, among other details.

Set to cross the Las Vegas Barrett-Jackson block without reserve from the Tammy Allen collection, this 1957 Cadillac Eldorado Biarritz convertible, one of just 1,800 produced in 1957. This Eldorado came well equipped with nearly every feature available from GM with power steering, brakes, windows, and power seats as standard equipment.

In 1957, the compression of the 365 V8 was raised, but power dropped slightly from previous years to 300 horsepower for the standard engine because dual-quad carburetors became optional rather than remain standard equipment, as they had been previously.

This example had a body-off restoration in 1997, and in 2000 a new owner rebuilt the engine and transmission in addition to replacing the top, tires, shocks and wiring. It has been driven less than 3,500 miles since then.

This 1957 Cadillac Eldorado Biarritz Convertible and the rest of the Tammy Allen Collection will be crossing the block at no reserve as part of Barrett-Jackson’s ninth annual Las Vegas Auction, October 13-15 at Mandalay Bay Resort & Casino. For more information, visit www.Barrett-Jackson.com/Bid or call 480-421-6694. Absentee bidding options powered by Proxibid are also available.