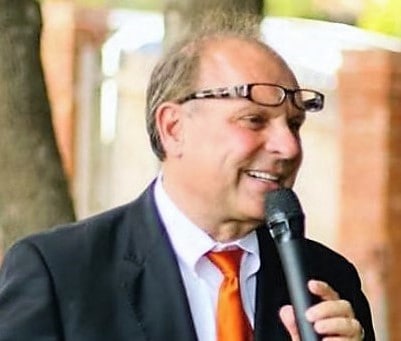 Spanky Assiter, the former lead auctioneer for Barrett-Jackson, is at it again, this time heading an auction of more than 150 collector cars in Amarillo, Texas. As an added bonus for the Texas crowd, Assiter’s wife Amy, a veteran auctioneer in her own right, will also be working the sale.

The new Amarillo Collector Car Auction takes place October 8 at the Amarillo Tri-State Exposition Fairgrounds, with the team from Assiter Auctioneers running the show in partnership with Vintage Autohaus & Imports of Amarillo.

“There’s nothing Amy and I love more than selling collector cars,” Spanky Assiter said in a news release. “We have some real beauties, including Corvettes, Mustangs, a 1930 Model A, collector pickups, and the great cars we all remember from the 1950s and 1960s.”

Pre-auction online bidding is currently under way at assiter.com, he added, “But it’ll really get fun when we begin the live bidding.”

Spanky and Amy Assiter were popular fixtures at Barrett-Jackson collector car auctions from 1992 through last year, when they unexpectedly parted ways with the Scottsdale, Arizona, auction company in early August, reportedly over a contract dispute. Spanky, with his signature reading glasses perched on his forehead, was lead auctioneer for key portions of the auctions while Amy worked the crowd as a charismatic bidder’s assistant.

After the split with the Assiters, Barrett-Jackson promoted auctioneer Joseph Mast to head the company’s four annual auctions.

Assiter Auctioneers, located in Canyon, Texas, near Amarillo, conducts auctions of property, real estate and other assets throughout the year. The collector car auction could become a permanent feature for the company, Assiter said.

“I believe this can grow into a regular event that attracts buyers from all over,” he added, “just as our Canyon Heavy Machinery auctions have become the go-to event for those with construction and farm equipment to buy and sell.”

The Amarillo auction costs $25 for bidders, a fee that will be waived for those who bring a bank letter of guarantee. General admission is $10, free for those 12 and younger attending with an adult. The event, which begins at 10 a.m. in the fairgrounds’ Rex Baxter Building,  will be webcast. The auction is accepting consignments through October 4.

For more information about the Amarillo sale, visit the auction website.