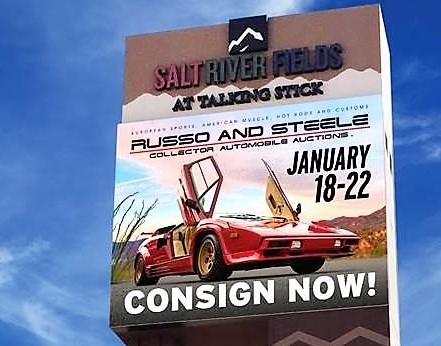 Russo and Steele announced Thursday that its home-base Scottsdale collector car auction is changing venues for 2017. After 16 years at Scottsdale Road and Loop 101, the event will move to Salt River Fields at Talking Stick, famed locally for its baseball stadium where major-league spring-training games are played.

Located a few miles south and east of the Scottsdale Road site, Salt River Fields is part of the Salt River Pima-Maricopa Indian Community that lies adjacent to Scottsdale. The auction tents will occupy a sprawling area in the entertainment complex where there is space to display the auction cars with acres of paved parking for auction goers.

The first auction at the new location will be held January 18-22, 2017, with 800 vehicles expected to cross the block in Russo and Steel’s unique “auction in the round” format.

“The move to Salt River Fields at Talking Stick represents a major milestone for Russo and Steele,” auction president and chief executive Drew Alcazar said in a news release. “The incredible amenities and the enhanced ambiance provided by Salt River Fields at Talking Stick will certainly add an additional level of excitement and sophistication that Russo and Steele has worked many years to achieve.”

Russo and Steele touted the easy access of the new site, which lies near the Loop 101 freeway and the major thoroughfare of Pima Road. The area is also famous locally for another automotive event that happens every Saturday evening: a massive collector car cruise-in at the Scottsdale Pavilions just south of Talking Stick. During the annual Arizona Car Week, the Saturday crowd swells to huge numbers.

The venue is also near three other major auctions held during the annual Arizona Car Week. Barrett-Jackson’s gigantic, weeklong event is at WestWorld, a few miles due north in Scottsdale, while Bonhams and Gooding & Company auctions take place in close-by Scottsdale locations.

The Salt River Fields site will put Russo and Steel “directly at the epicentre of all the action during Arizona Car Week,” the company said in the news release.

“Salt River Fields at Talking Stick is very excited to be the new home of the Russo and Steele Collector Automobile Auctions during January’s car week festivities,” said David Dunne, general manager for Salt River Fields at Talking Stick. “We look forward to showcasing these amazing automobiles at our state-of-the-art facility and starting the new year off with such a high-quality event.”

For more information about Russo and Steel’s January event, see the auction website.