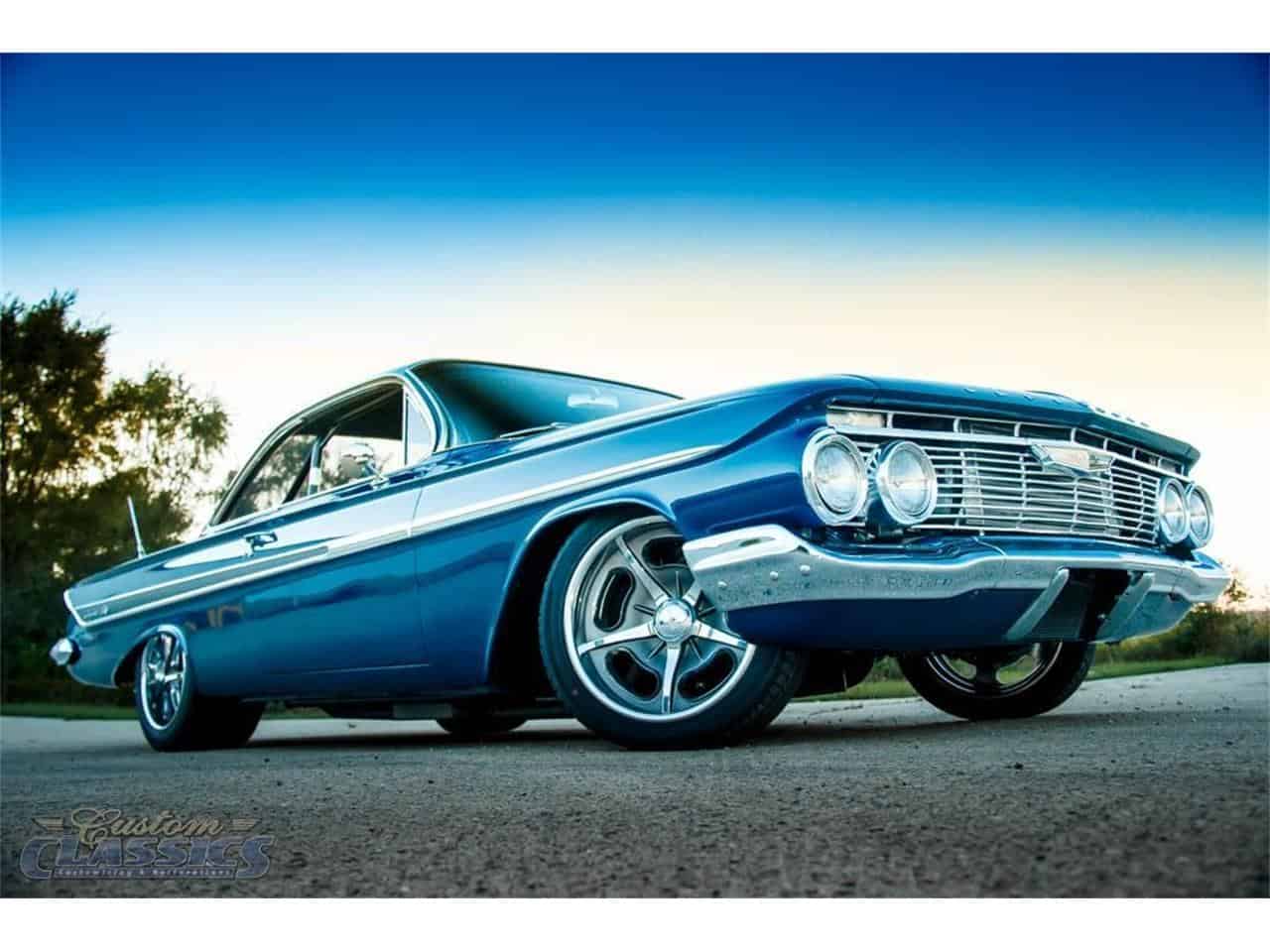 Pick of the Day, 1961 Chevrolet Impala

As the owner of a naturally aspirated car, boost has a certain appeal. Turbo spooling is enough to get my adrenaline going, but the mention of twin turbos brings to mind the phrase “I literally can’t even.” So much so, that the Pick of the Day, a 1961 Chevrolet Impala, was selected because of just those two words: twin turbos.

The turbos are connected to a 509 cid big block rated at 669 horsepower on a street tune with pump gas and 13 pounds of boost. The listing on ClassicCars.com goes on to say that when ran on 110 race fuel with the race tune and the boost turned up just a bit, the Impala will put 1,500 horsepower to the wheels without any issues.

Twin turbo engine in the Impala

I know what you are thinking: “What the heck do you need 1,500 horsepower in a 61 Impala?” The answer is: nothing. Of course no one needs that much power, but those with a need-for-speed would be very satisfied.

According to the listing, the car was put on the dynometer by Dyno Source in Wadsworth, Illinois, who told the seller with an “upgrade to the pump, the engine will produce over 2,000 horsepower with ease.”

Mated to this wild twin-turbo monster is a tough 4L80E built 4-speed transmission.

Despite the listing declaring that the Impala is a pro-touring car, it appears to be a mixture of purpose-built-race car and resto-mod, since the modified machine features enhanced suspension components, brake system and drivetrain, and includes elements more commonly seen on modern performance vehicles.

The seller says the x-frame used to support the big block mixes subdued looks with proven brawn. Customized and refinished by McCoy Race Car Chassis, the front frame section was removed and a custom fabricated front tube chassis replaced it. The listing further notes that a “front rack-and-pinion (steering) setup was added as well as upper and lower tubular control arms with 4-wheel disc brakes for some much needed stopping power.”

Interior of the Impala

Custom framework was added along the outside of the x-frame to run along the inside rocker panels to further strengthen the body.

Rear end components include a 9-inch rear-end with 3.73 gears and posi-traction differential. The listing adds that the power meets the pavement through custom Schott wheels wrapped in a set of Mickey Thompson tires sized at 345x35x18. The seller adds the front wheels are wrapped in a set of Hankook tires measured at 225x45x18.

According to the listing, the interior is composed of black leather and vinyl as well as thick black carpeting. Bucket seats adorn the front of the car and a custom center console has been added, housing some gauges to further monitor the engine.

“We even added a couple of cup holders because you’ll need two hands on the wheel when you hit the gas pedal,” the listing says, adding that from the driver’s seat, the dashboard appears clean, clear and factory crisp, as well as having a factory-style radio in the dash.

The interior is completed with black carpet that frames its way around the 8-point certified roll cage that’s tucked away and mostly out of sight, the seller adds.

The Illinois dealership listing the Impala, offered for $149,900, says the restoration and build process took four years to complete, commenting that “the greatest thing about building a massaged third-generation Impala is the crouched, laid-back aesthetic most street rod enthusiasts crave is pretty much standard factory fare” while the “Impala possesses the kind of performance and style that literally defines ‘one-of-a-kind.’”

To view this vehicle listing on ClassicCars,com, see Pick of the Day