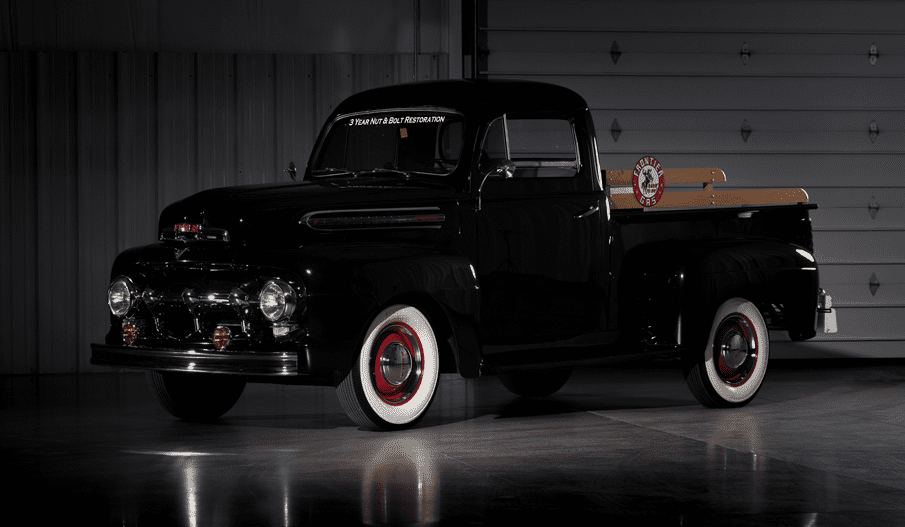 Editor’s note: This is the 16th in a 30-day series featuring cars from the Tammy Allen Collection to be sold October 13-15 at Barrett-Jackson’s 2016 Las Vegas Auction.

In 1948, Ford launched the F-series, which became their best-selling line of pickups. The first trucks, the F1, featured styling from the era’s passenger cars and what became known as the “million-dollar cab.” Development costs earned it the nickname.  The cab was larger and more spacious than those of previous Ford pickups.

Rear view of the F1 Pickup

From the F1’s debut in 1948 through 1952, it appeared essentially the same, although minor trim changes were made each year.  In 1951, the most significant change made to the F1 was to the grille and the restyled interior.

The standard engine was a 226 cid six-cylinder, but buyers had the option of upgrading to the 239 cid V8. The F1 came standard with a 3-speed manual transmission with a 4-speed also available as an option option. The 1951 F1 also saw the gear shift for either transmission option emerge from the steering column instead of the floor.

Offered from the Tammy Allen collection to be auctioned by Barrett-Jackson in Las Vegas, this particular F1 features the optional V8 and 4-speed transmission in addition to the updated chrome grille.

This truck was restored over three years in the late 2000s and comes with a “bare bones” heater and radio delete. Additionally, the chrome and stainless steel trim were professionally restored and the trucks gauge cluster was reconditioned.

Restoration included an engine rebuild, while the paint and interior were renewed and new oak wood was used in the truck bed.

This 1951 Ford F1 pickup and the rest of the Tammy Allen Collection will be crossing the block at no reserve as part of Barrett-Jackson’s ninth annual Las Vegas Auction, October 13-15 at Mandalay Bay Resort & Casino. For more information, visit www.Barrett-Jackson.com/Bid or call 480-421-6694. Absentee bidding options powered by Proxibid are also available.