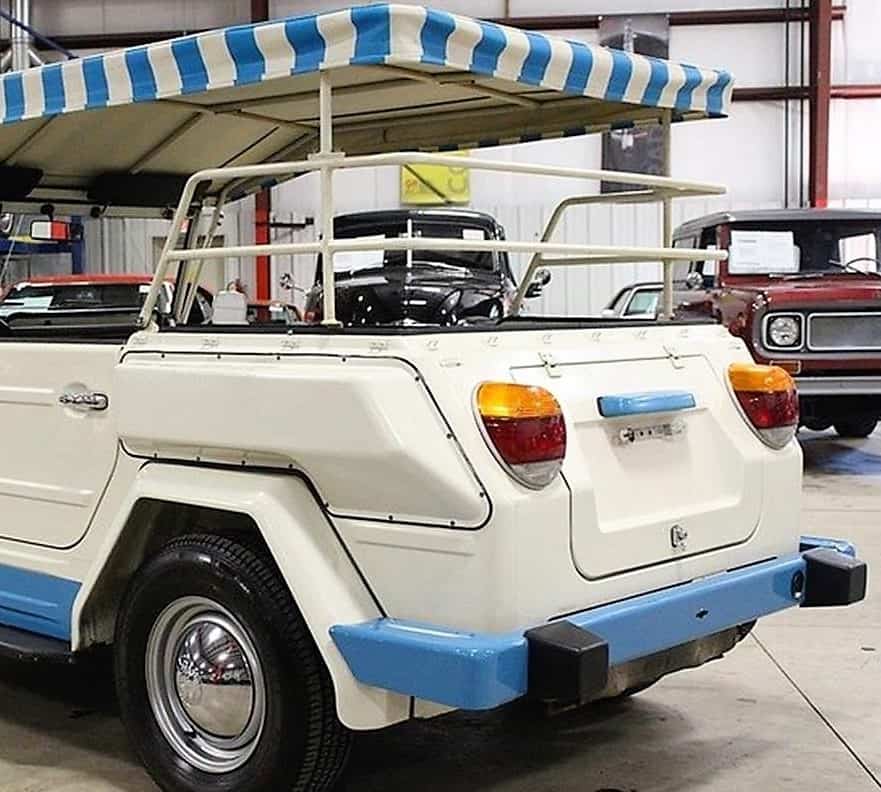 There’s something about these little beach cars that get people excited. The Fiat Jolly, with its wicker seats, cutaway doors and fringe top, is the sunny poster child of this quirky collector car niche, but there are a few other European models that have been fashioned into seaside cruisers. It’s easy to see why. What could be more fun?

The Pick of the Week is a rare find, what is said to be a totally authentic and documented 1974 Volkswagen Thing Acapulco Edition. The vast majority of VW Things were of the standard setup -– strange unto itself -– while only around 400 Acapulcos were built during a three-month period in 1974, according to the listing on ClassicCars.com.

So there are quite a few regular Things out there that have been transformed into Acapulcos. Not a bad thing, as long as no one tries to pass it off as a genuine Acapulco Thing. This one, on the other hand, is a low-mileage original that not only has all the supporting paperwork and correct details but is completely original with just 36,736 miles on the odometer.

While one might expect to find such a unicorn basking in a coastal town in Florida or Southern California, this one is being advertised by a dealer in the decidedly unbeachy city of Kentwood, Michigan, just down the road from Grand Rapids.

“This car is believed to be #2 of the run and is a pristine original Acapulco edition that has never been modified, restored or altered from when it was new,” the dealer says in the ad. “That is extremely important as there are others on the market that have been completely restored or duplicated to mimic the true Acapulco vehicle. This is the real deal and owner history, vehicle history and mileage is all original from new.”

In the listing, the dealer runs through the car’s history of ownership, with one of the final caretakers being VW pro Larry Dustman, owner of The Thing Shop in Chandler, Arizona.

“Larry purchased this specific car because it was the most authentic Acapulco edition that he could find that was not altered from its factory specs,” according to the listing. “He used this car as the mold for duplicating parts for people that needed authentic and original style Thing parts as well as to produce recreation items for the Acapulco edition for the masses.”

The rarity and authenticity of this Thing Acapulco Edition ranks it up there in desirability, thus the steep asking price of $39,900. The values and recognition of these cars were raised considerably last year when one just like this sold at the Gooding auction at Amelia Island, Florida, for $63,000, causing Thing owners everywhere to rejoice. Things have settled down since then.