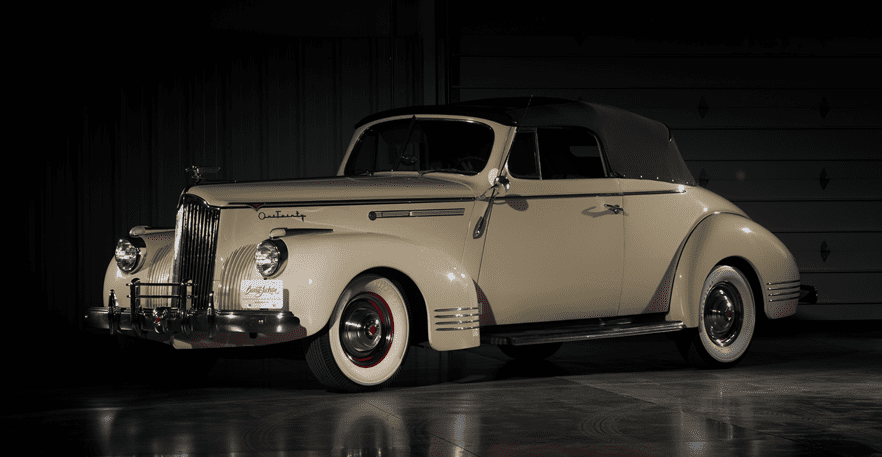 Editor’s note: This is the 13th in a 30-day series featuring cars from the Tammy Allen Collection to be sold October 13-15 at Barrett-Jackson’s 2016 Las Vegas Auction.

Packard enjoyed success during the 1920s, however that changed when the great depression hit and vehicle sales fell from 50,000 cars to just 7,000.

The 120 series, launched in 1935, was Packard’s entry into the mid-price market. The 120, named for the length of its wheelbase, started at $1,000 and offered buyers a smaller, simpler, and much less expensive Packard than the older and larger versions the company was known for, yet it retained the quality and prestige for which Packard was famous.

For 1941, front-end styling was changed slightly from earlier models and the headlights were incorporated into the fenders. Wheels were reduced in diameter to 15 inches. Eight body styles were offered that year, and total sales for the 120 series amounted to a little over 17,000 cars.

This particular convertible, offered at no reserve from the Tammy Allen collection set to cross the Barrett-Jackson Las Vegas auction block, has spent almost its entire life in California. It was in the possession of the first-owner’s family until sold to Tammy Allen. It has since been comprehensively restored to correct specification and it features the optional radio, clock, and wheel trim rings.

Other highlights include new glass, interior, cloth top and paint.

The 120 is powered by Packard’s smooth Straight-8 engine with 3-speed overdrive.

This 1941 Packard 120 convertible and the rest of the Tammy Allen Collection will be crossing the block at no reserve as part of Barrett-Jackson’s ninth annual Las Vegas Auction, October 13-15 at Mandalay Bay Resort & Casino. For more information, visit www.Barrett-Jackson.com/Bid or call 480-421-6694. Absentee bidding options powered by Proxibid are also available.