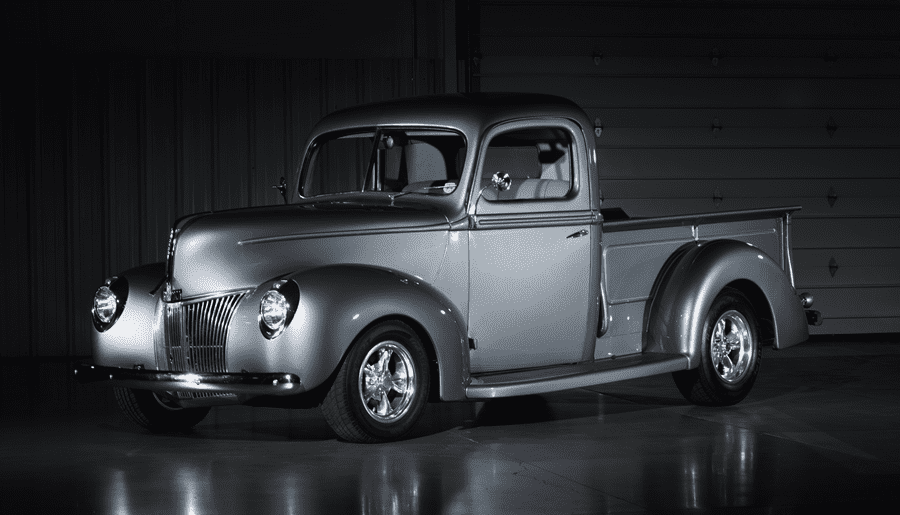 Editor’s note: This is the 12th in a 30-day series featuring cars from the Tammy Allen Collection to be sold October 13-15 at Barrett-Jackson’s 2016 Las Vegas Auction.

Over the course of automotive history, pickup trucks primarily were purpose-built work vehicles — until relatively recently. Old-style pickups have been increasingly used to create hot rods, once seemingly made exclusively from 1930s roadsters and coupe platforms.

This 1941 Ford pickup custom, offered as part of the Tammy Allen collection to be sold at Barrett-Jackson’s Las Vegas auction, features the same front end styling as passenger cars of the time, a design cue Ford hadn’t repeated since 1932. Another appealing aspect of the 1941 Ford pickup was that if offered several optional engines, including a no-cost option (and for the first-time) 6-cylinder engine.

This 1941 half-ton was professionally built in 1999 to retain its classic lines but sits on a lowered, modern suspension with power rack and pinion steering, power disc brakes, and air conditioning.

The pickup rolls on Halibrand knock off wheels and power is provided by a 350 V8 hooked to an automatic transmission with overdrive.

The Ford also features custom leather interior and has lots of chrome details.

This 1941 Ford “Gray Ghost” custom pickup and the rest of the Tammy Allen Collection will be crossing the block at no reserve as part of Barrett-Jackson’s ninth annual Las Vegas Auction, October 13-15 at Mandalay Bay Resort & Casino. For more information, visit www.Barrett-Jackson.com/Bid or call 480-421-6694. Absentee bidding options powered by Proxibid are also available.