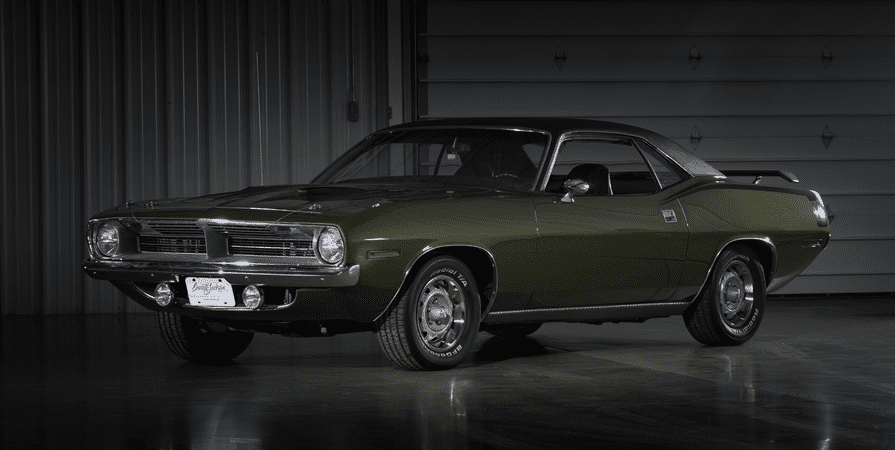 Editor’s note: This is the 11th in a 30-day series featuring cars from the Tammy Allen Collection to be sold October 13-15 at Barrett-Jackson’s 2016 Las Vegas Auction.

Launched in 1970, the third generation of the Plymouth Barracuda was a force to be reckoned with and a purpose-built performer whose main mission was to kick asphalt and take names.

The ‘Cuda had shared its platform with other Valiant models in the first and second generation, but by the third gen he car was a stand alone Chrysler vehicle built on the new “E-Body” platform.

The new chassis design was a shorter, wider version of Chrysler’s B-bodied cars, such as the Plymouth Road Runner, and was designed to include a larger engine bay than in previous years.  The fastback version of the car had been eliminated from the lineup, leaving body options limited to either a coupe or a convertible in 1970.

The third generation offered three trim packages: the base model, the Gran Coupe, and the Sport.

The base-level Barracuda offered a choice between the 198cid Slant 6-cylinder engine or a 225 version, and select V8 engines used with the luxury-inspired Gran Coupe and the high-performance Sport edition were also offered. In total, the ‘Cuda enjoyed six V8 engine options, including the 318, 340, 383 Super Commando 2-barrel with 290 horsepower or 4-barrel with 330 horsepower in base and Gran Coupes, and the 440 4-barrel, 440 6-barrel or 426-cid Hemi with two 4-barrels.

The Sport edition cars offered the 440 and 426 Hemi engines with a heavy-duty suspension package and structural reinforcements to ensure the power got to the ground.

Offered from the Tammy Allen collection without a reserve during Barrett-Jackson’s Las Vegas auction, this 1970 Plymouth Barracuda is one of just 618 produced that paired a 440 cubic inch 4-barrel with the 727 TorqueFlite transmission.

This matching-numbers car has endured an older full rotisserie restoration and is fully documented.

This 1970 Plymouth ‘Cuda and the rest of the Tammy Allen Collection will be crossing the block at no reserve as part of Barrett-Jackson’s ninth annual Las Vegas Auction, October 13-15 at Mandalay Bay Resort & Casino. For more information, visit www.Barrett-Jackson.com/Bid or call 480-421-6694. Absentee bidding options powered by Proxibid are also available.