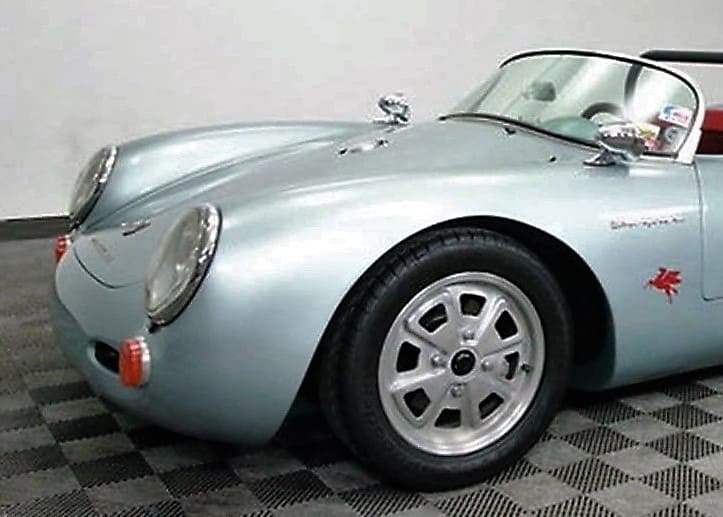 Last week, Bonhams auction announced the stunning sale of an original preserved 1956 Porsche 550 Spyder for $6.1 million, a world record by far for the mid-engine roadster made famous by the demise of actor James Dean in his “Little Bastard” on a Southern California highway.

So there goes yet another cool collector car sailing out of sight for most of us. But if authenticity is not key to your enjoyment of this most memorable of early Porsche road/race cars, there is another, less-painful way to obtain a reasonable facsimile.

The Pick of the Day is a 1956 Porsche 550 Spyder replica rendered in fiberglass by Beck, the Indiana company that has made a name for itself as a builder of quality replica Porsche Speedsters and Spyders.

This Porsche replica looks real enough that most folks won’t be able to tell the difference, although like oft-replicated Shelby Cobras, most times when you see one on the street, it’s assumed to be a non-original unless proven otherwise. Sure, some of your Porsche buddies will call it a fake, but their criticism would be moot when you enjoy flinging this quick and agile roadster along a winding back road.

And by quick, this 550 should roar with its Bergmann-built 2,387 cc four-cylinder engine rated at 160 horsepower, according to the Denver, Colorado, dealer advertising the car on ClassicCars.com. With the car weighing just 1,300 pounds, that should be plenty to propel this little bastard with some gusto.

The Porsche replica has been set up for track safety with a set of five-point racing harnesses and roll bar. What a fun way to spend an open-track day, which have become fairly common across the country. But sorry, this would in no way qualify as a vintage race car for historic events.

These Beck replicas are highly sought after, the dealer says in the listing, and if you ordered one from the factory, it could take a year to get it and cost nearly $50,000.

So this one, which the dealer says has been driven just 37,600 miles, would seem like a decent deal at its asking price of $29,900. There are some chips and imperfections added since the roadster was built in 2005, the dealer adds, but it looks very presentable in the photo gallery with the ad.