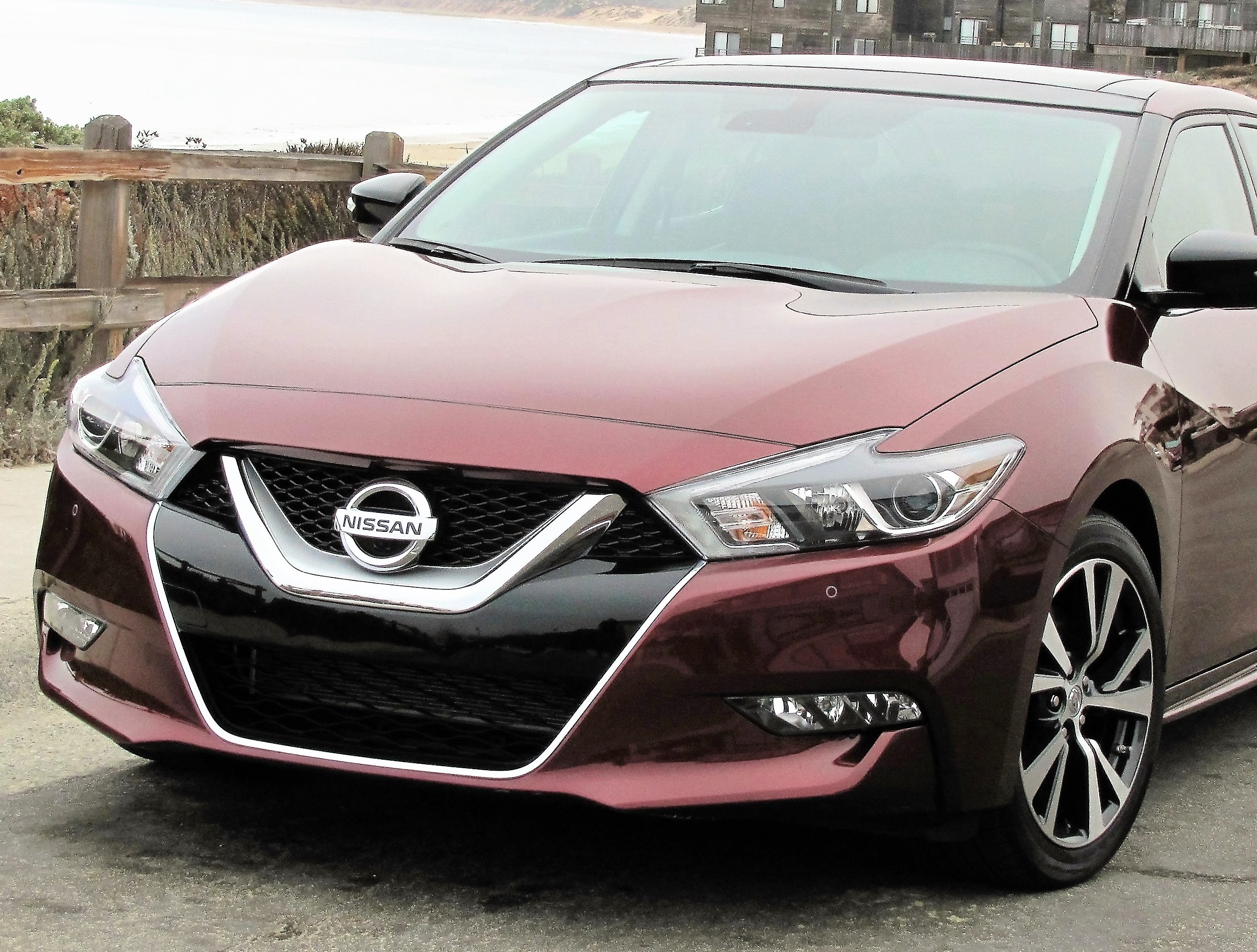 The winding, tree-lined roads in and around Monterey and Pebble Beach, California, are like a carnival ride for people who want to hunker down and drive. Indeed, the legendary road race near Pebble Beach Lodge started in the same year as the famed Concours d’Elegance that marked its 66th anniversary this year.

I was driving those same roads recently as I helped cover the Monterey Car Week car shows and auctions for ClassicCars.com. The 2016 Maxima loaned to me by Nissan seemed at first like an unlikely craft for such fun duty, being a fairly large sedan loaded up with luxury features, but the Japanese automaker’s promise of a “4-door sports car” turned out to be not so far off the mark.

It was while hustling along the back roads to the Pebble Beach Concours – late and trying to make up time as usual – that I became impressed with the agility and refinement of the Maxima. Despite its size and weight, the sedan was able to rush around the many curves of the narrow roads, responding nicely to throttle, steering and brakes without making a fuss.

Also not making a fuss was my passenger and ClassicCars.com colleague, Larry Edsall, who generally looks askance at my driving excesses. He seemed relaxed and unconcerned that we might, say, hit a tree.

Nissan completely revamped its flagship sedan for 2016 and it continues essentially unchanged for the new model year. It was the designers’ stated intent to return Maxima to the sporty characteristics that marked earlier versions, and despite its growing bigger and gaining a continuously variable transmission, Maxima performs quite well in the twisties. A 4-door sports car might be a reach, but it certainly is a sharply responsive sedan.

Power comes from a 300-horsepower version of Nissan’s workhorse 3.5-liter V6 that can be found in various levels of tuning in a range of the automaker’s vehicles. This is a smooth and willing engine that provided decent acceleration and never felt overworked pulling around the 3,600-pound sedan.

I remain impressed with how well Nissan has mastered the performance of continuously variable automatic transmissions, which can be intrusive and annoying as they “shift” gearlessly with a sometime droning effect. While I still prefer the behavior of a conventional multi-gear automatic, the CVT in the Maxima rarely bothered me but seemed right on the ball under most driving conditions. The CVT is also partly responsible for Maxima’s enviable EPA mileage rating of 22 city and 30 highway.

The only clinker I found was a kind of disconnected jerkiness when driving at very low speeds, when there seemed to be gap between throttle and brakes that caused the car to shudder. Not a big deal, though.

The Maxima is quiet at highway speeds without the intrusion of wind noise and tire roar, all the better to enjoy the excellent 11-speaker Bose sound system.

This substantial car is also very comfortable, which was much appreciated while sitting in traffic during the Monterey area’s crowded week of multiple car events and 10s of thousands of spectators. The so-called “Zero Gravity” front seats are cushy and supportive, and there is plenty of legroom even for an extra-tall driver as me. The Maxima grew two inches in length, and the interior seems to have benefited.

Also appreciated was the excellent GPS navigation that kept me from getting too lost on the Peninsula. That was part of the luxury fittings in the top-end Platinum version of the Maxima that I drove.

The Maxima Platinum comes complete as a package with no other options left to order. They include a dual-panel panoramic sunroof, premium leather seats with a diamond-quilt pattern, rain-detecting wipers, intelligent cruise control that adapts to the vehicle ahead, voice recognition for GPS and audio systems, Around View Monitor (which gives you the eerie effect of looking down on the car from above), Moving Object Detection, Active Noise Cancellation for that quiet ride, as well as a complete range of luxury and power features.

Oddly, the test car did have an extra options charge of $220 for floor mats, trunk mat and trunk net. Seems kind of low rent for a car like this.

The interior felt pretty luxurious, with all the goodies you’d expect to find in the premium version of Nissan’s flagship. Material and execution seemed first rate, though again, I did find a surprising clinker: the faux mahogany wood trim is way too cheesy and fake-looking for such an otherwise classy cabin.

Maxima’s styling is quite distinctive, in line with Nissan’s latest theme of dramatic curves and creases. Similar to the Nissan Murano SUV that I drove last year, the Maxima seems to have some kind of vestigial tail fins lurking beside the roof pillars, outlined in chrome. The headlights and taillights also present like gleaming splashes of color and shine. Maybe a little too splashy for some folks, but no one will ever accuse Maxima of being too conservative.

The Maxima Platinum seemed fairly priced at about $41,000, including shipping and that $220 in options, considering the car’s luxury trim and features. There are five models of the Maxima, starting at $32,560 plus shipping for the S model, and going up from there.