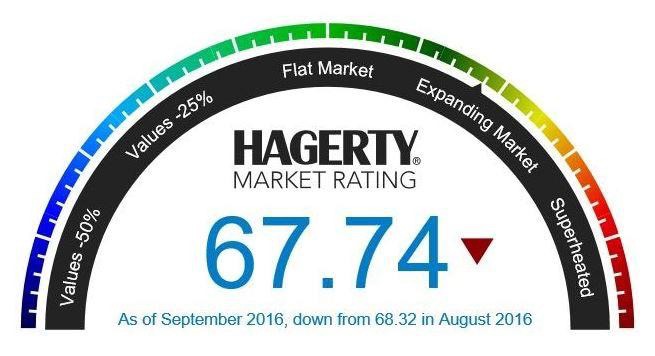 For the second month in a row, the Hagerty Market Rating, a complicated algorithm designed to take the pulse each month of the collector car marketplace, fell again in the mid-August to mid-September time period. Based on a 100-point scale, the September rating is 67.74.

Although the number dropped more than half a point from the 68.32 figure for August, it still is within the “expanding market” range, which means the market is neither flat nor overheated.

“In spite of decreased auction activity, private sales and requests for value increases, the market is currently balanced by a strong economy and the fact that the vast majority of classic cars continue to hold their value,” McKeel Hagerty, chief executive of the insurance and vehicle-value tracking company, said in a news release.

The Hagerty news release pointed to several factors in the September decline:

On the other hand, some vehicles are outperforming the overall market. The top five in that category are the:

Hagerty notes that Riviera remain in high demand and that while supply increases as people become willing to sell their cars, sales prices also have increased in both private and public transactions.

It says collectors are adding Mercedes’ 190 sedans “in droves” as the cars are being recognized as both distinctive and practical transportation “for little money.” Meanwhile, the larger S-Class Mercedes, once among the most expensive luxury cars, “are being rediscovered by nostalgia hunters who regard them as stylish, cheap, and durable.”

The Pontiacs are being purchase by “bargain buyers” who see the car as equal parts power and comfort, and at a discount, and “have latched onto this model and prices are rising as a result,” Hagerty’s news release reported.

As to the big Dodge pickup truck — “burly,” Hagerty called them, “Auction activity for these classic pickups has started to simmer following some big sales from a few years ago, but private activity remains very strong, with a 33 percent increase in insured values.”