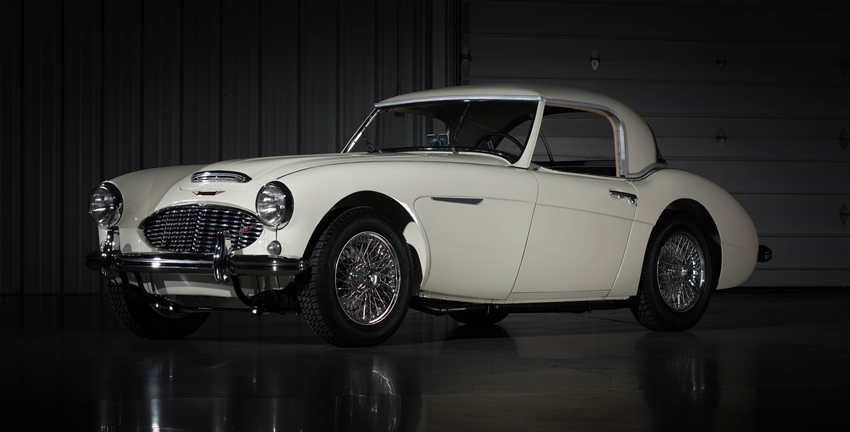 Editor’s note: This is the seventh in a 30-day series featuring cars from the Tammy Allen Collection to be sold October 13-15 at Barrett-Jackson’s 2016 Las Vegas Auction.

In 1953 Austin-Healey started production with the 4-cylinder 100-4 model and in 1956 offered a new 6-cylinder car that featured revised bodywork, including two small rear jump seats for children. The design came straight from the in-house talent at Healey Motor Company and with the body atop a muscular chassis, utilizing a 90-inch wheelbase.

The 1958 Austin-Healey, offered from the Tammy Allen collection without reserve at the Barrett-Jackson auction October 13-15, was the recipient of an extensive restoration in 2010 performed by Healey Lane Restoration of Oregon.

Finished in the original Old English White exterior Sikkens base coat and clear coat paint, the body was stripped to bare metal and minimum bodywork was performed. The Old English White is complimented by a black leather and vinyl interior.

Additionally, the car comes with its original factory hardtop and a new soft-top as well and the original fasteners were replated.

Powering the Austin-Healy is a 2,639cc straight-6 engine rated at 117 horsepower, mated to a 4-speed manual plus overdrive.

The second upgrade involved the use of 3000-model disc brakes rather than the factory drum brakes.

This 1958 Austin-Healey 100-6 BM4 roadster and the rest of the Tammy Allen Collection will be crossing the block at no reserve as part of Barrett-Jackson’s ninth annual Las Vegas Auction, October 13-15 at Mandalay Bay Resort & Casino. For more information please visit www.Barrett-Jackson.com/Bid or call 480-421-6694. Absentee bidding options powered by Proxibid are also available.