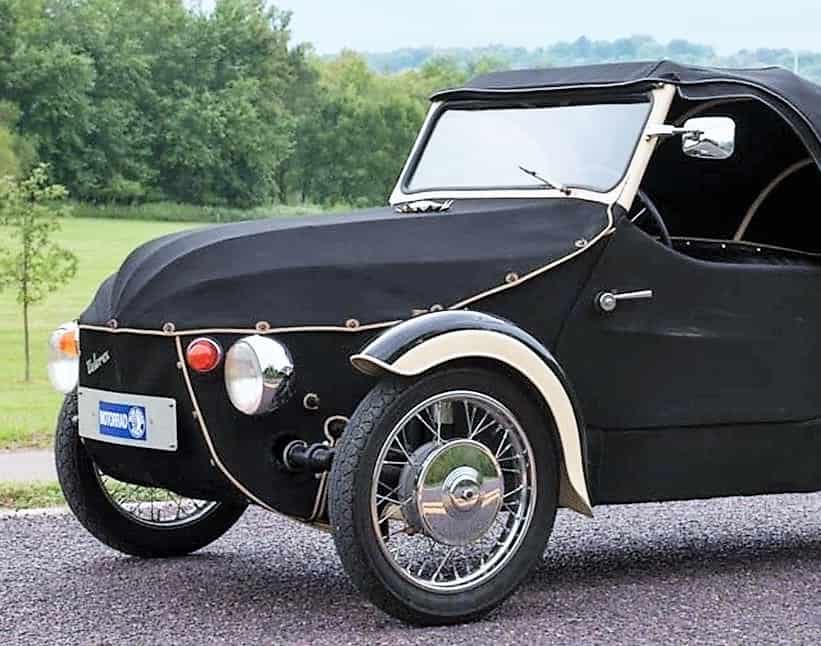 Basic transportation could hardly be more basic than the Pick of the Day, a three-wheeled Czechoslovakian cyclecar. Modeled in the 1930s after the three-wheeled Morgan of Great Britain, the tiny 1969 Velorex 16/350 features a button-on fabric body, a two-cylinder two-stroke engine and an unladen weight of 683 pounds.

Cyclecars – literally a cross between an automobile and a motorcycle – were favored by sporty-but-thrifty Europeans drivers who wanted the thrill of cycling with greater practicality and weather protection. This model was built in the former Czechoslovakia during Soviet rule by a company that still exists today as a maker of motorcycle sidecars under the name Velorexport.

The Verorex looks more like a motorcycle from the rear

How rare is the Velorex 16 cyclecar in the United States? Well, who among us has ever heard of it, much less seen one? I’m sure there are some microcar aficionados who are fans, but they’re undoubtedly rare as well.

About 12,000 Velorexes were produced, with more than 60 percent of them still registered in the Czech Republic and Slovakia, the dealer says, quoting data from Wikipedia. They can still be spotted on the roads there occasionally and have “obtained cult-like status among its owners,” the dealer says, adding that this one has been driven just over 35,000 miles.

“The Velorex’s light weight, small size and open-air feel combine to make it a very fun vehicle in which to tool around,” the dealer says in the listing.

The seller does not list a price for the Velorex three-wheeler, which looks very nice in the ad’s photo gallery. Not surprisingly, I could find no listings for the Velorex 16 on any of the classic car price guides.

I did find one sold in 2012 on BringaTrailer.com, apparently for $13,250, although the market for rare collector’s items has been booming during the past few years. This one also looks to be in better shape than the BAT car, the fabric body having an almost-elegant two-tone black-and-tan motif.