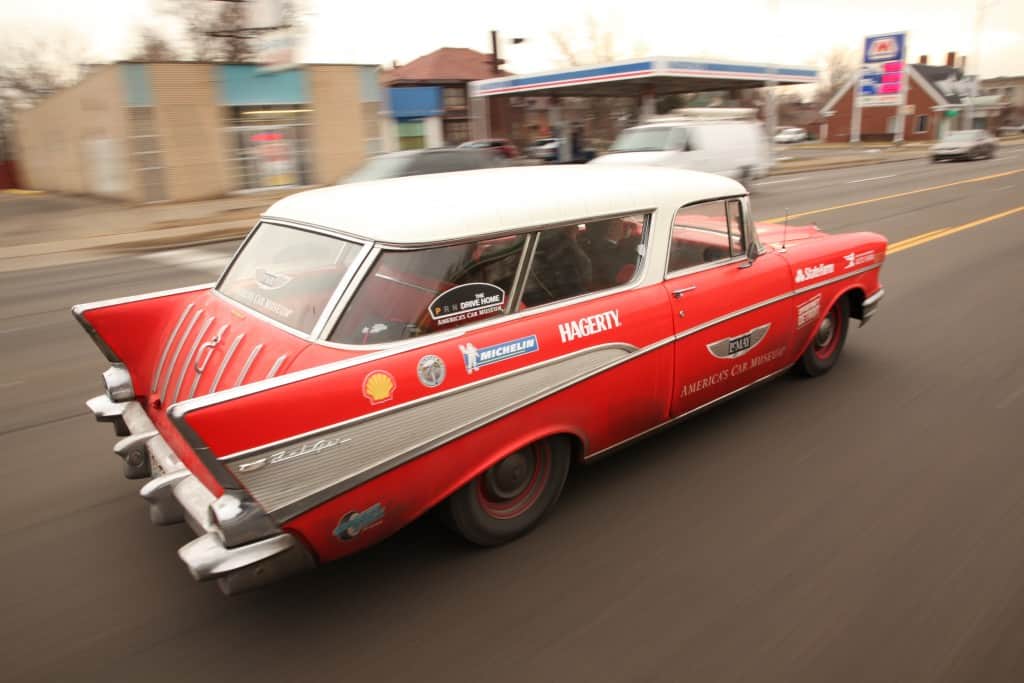 As part of Shell’s Blue Friday promotion with the NFL’s Seattle Seahawks, the LeMay – America’s Car Museum, located in Tacoma, Washington, is set to show the 1957 Chevrolet Nomad and 1966 Ford Mustang participating in the Drive Home II – an 11-day road rally from Boston to Detroit – at Shell stations along the Puget Sound tonight, and September 23, 30, and October 1.

In addition to seeing the cars, visitors can meet Seahawks’ Blitz and the Seagals, and participate in memorabilia giveaways.

The America on Wheels museum also grants buy-one-get-one-free admission on October 7, from 10:00 a.m. to 4:00 p.m. to those wearing Pink in recognition of Breast Cancer Awareness day.

This Saturday, September 17, the Seal Cove Auto Museum holds Cars and Coffee from 9 a.m. to noon with various military vehicles on display, including some from the Coast Guard and National Guard.

The following weekend, September 24, the Ellsworth Chamber of Commerce holds the 33rd annual Autumn Gold Car Show at the museum. The museum is to also show a 1904 Searchmont and award the first annual Seal Cove Auto Museum Directors Choice Award.

Additionally, Cars and Coffee is scheduled at 8 a.m. this weekend at the Kansas City Automotive Museum.

The California Automobile Museum celebrates the 50th “auto-versary” of Star Trek on Saturday. The celebration takes place at the museum from 10 a.m. to 5 p.m. and features activities like Star Trek jeopardy. Attendees are encouraged to come as their favorite character and enjoy the space inspired cars.

The AACA Museum plays host to a Corvair car show September 24 from 8 a.m. to 3:30 p.m. “People’s choice” awards are to be given to participating cars and attendees can enjoy door prizes, a scavenger hunt in the museum, food, and various vendors. The following day, the museum holds a Matchbox Toy Show from 9 a.m. to 4 p.m.

Cars and Coffee is held at the museum within its “secret garage” on October 6 and 7 from 7:30 until 10 a.m. Donuts and coffee will be served.

Volvo is the featured marque September 24-25 at the 2016 Foreign Auto hosted by the Owls Head Transportation Museum. The free show welcomes all years of Volvo and all pre-1996 vehicles.

The National Corvette Museum in Bowling Green, Kentucky, has opened registration for the 2016 Vets N Vettes car show for November 3-5 and invites veterans to visit the museum and the museum’s track for rides in participant’s Corvettes.

The Blackhawk Museum holds Picnic on the Plaza for pre-war classic vehicles on October 9.

The Automotive Hall of Fame in Dearborn, Michigan, plans Cars and Coffees for October 15.

The America On Wheels Museum holds the first annual Toy & Model Car Show on October 15 from 10 a.m. to 4 p.m.

Trunk or Treat is at the NCM Motorsports Park on Tuesday, October 25 from 4-6 p.m.

The World of Speed Museum in Wilsonville, Oregon, holds its inaugural Spark Gala on Saturday. Proceeds support the museum’s education programs. Additionally, the museum holds the final practice and qualifying run September 29 from 5:30 to 8 p.m. for the “simulator race series.” Drivers with top qualifying race times advance to the finals, which take place on October 27.

On September 28 the Kansas City Automotive Museum features the Lego Movie and Ghostbusters during their free drive-in movie night.

Slated for October 1, the Gilmore Car Museum in Hickory Corners, Michigan plans to show American Graffiti. Admission is $10 per car load and the museum encourages guests to bring lawn chairs and blankets to enjoy the movie, scheduled to start at 7:30 p.m.

The Seal Cove Auto Museum holds a Masquerade Ball on Saturday, October 22 from 7 p.m. to 10 p.m.