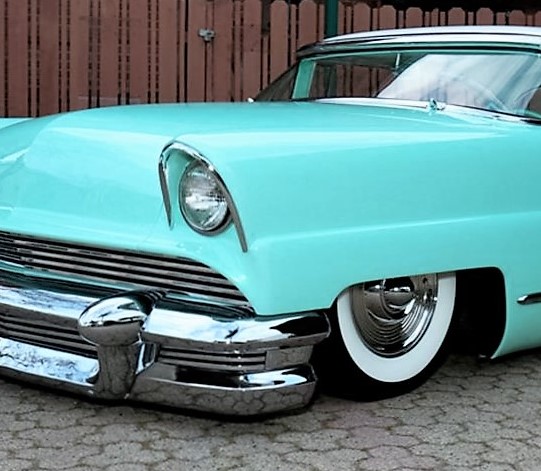 Long, low and minty fresh. This imaginatively customized 1956 Lincoln Capri hardtop coupe has to be one of the most outrageous builds ever featured as Pick of the Week.

The Lincoln is a stunning car, which seems more like an entry in a national custom car show than a vintage classic looking for a new home. From the photos, the proportions look spectacular and the interior crosses over between that of a concept car and a funky low rider.

“This is one of the cooooolest customs on the planet,” says the Orange, California, dealer offering this car on ClassicCars.com. “And what’s not to love. Chopped 4 inches, shaved, extended custom skirts, handmade front grill, custom trim, custom front bumper from a ’54 Lincoln and custom rear bumper from a ’56 Packard… and the list goes on and on.”

Although there is no mention in the ad as to who performed the work that transformed this Lincoln into a showpiece, it was obviously a professional who deserves credit. The car looks beautifully done, with a lustrous finish over straight bodywork, and extensive chrome features.

“Inside expect nothing but the best custom interior with a radical custom wheel, one-off custom dash hand-built by the owner, hidden sound system and ice-cold air conditioning,” the listing says.

The builder did not scrimp on performance either, with a 460 cid Ford V8 with a Ford C6 automatic transmission and posi-traction rear, four-wheel disc brakes, rack-and-pinion steering and air suspension, obviously. Despite the extensive custom features, the Lincoln is fully drivable, the seller says, once you lift it up a bit with the air pump.

“You can cruise comfortably or lay her out in the weeds for show,” the seller adds.

While the $68,500 asking price is certainly not cheap, it does seem like quite a bargain for this seemingly exquisite show car that would fetch all the eyeball in the world.