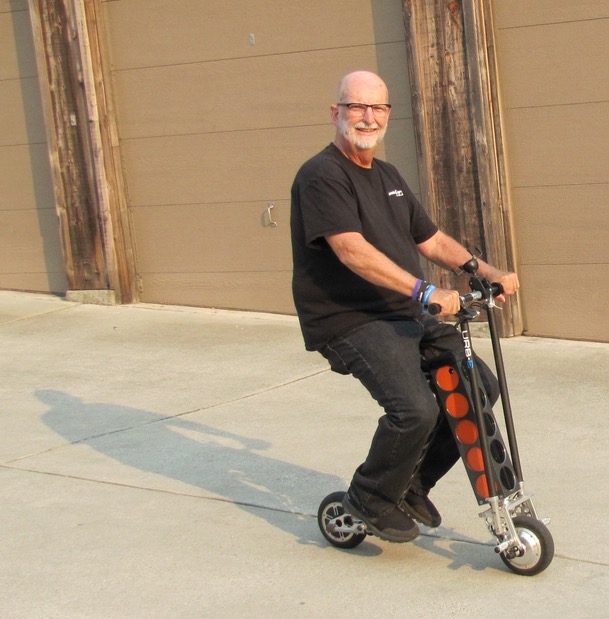 If you race a vintage sports or formula car, you likely need a pit bike for maneuvering your way around the paddock or out to the race track’s various corners to check the line, and maybe to see how well your competition is doing in practice.

Or maybe you show your classic car at large venues, such as Goodguys events, or you go to the big swap meets and you’d like a way to see everything but that old football injury takes its toll when you walk too long.

Or you have an RV and need a way to tool around the campground.

Or perhaps you live in a town with light rail commuter service but it’s too many blocks from your home to the station or the stop nearest your work leaves you with a mile or so to walk.

Well, there’s a relatively new vehicle, perhaps even a future classic, available that might fit your needs for any of the above. It’s the URB-E. That’s URB as in urban and E as in electric. Or URB-E as in a lightweight, folding, one-person electric scooter that can carry you at speeds up to 15 miles per hour and at distances as far as 20 miles on a single battery charge.

Oh, and you can charge your smartphone as you ride via URB-E handy USB port.

And URB-E is an example of jobs coming home to the U.S. as well.

URB-E launched in 2013 as an Indiegogo crowd-funding project based in Pasadena, California, where the folding scooter was designed and engineered. The original plan was to base production overseas, but the Urban626, LLC team — led by a designer who teaches at Art Center College of Design and an engineer with experience with Porsche, Fisker and Saleen Automotive — was unhappy with the quality of the prototypes they were receiving.

So a decision was made to leverage Southern California’s experience in aerospace production and to build the scooters at home from 6061-grade aircraft aluminum and carbon fiber. Sales began in August 2015 with some 2,000 URB-Es delivered so far.

The folks at Urban626 offered me use of a test model for the Monterey Car Week weekend. Urban626 had a booth at the Monterey Motorsports Reunion at Mazda Raceway Laguna Seca where I chatted about the URB-E and its development with sales manager Tom Gilfillan, who also shared instructions on unfolding, folding and charging the one I was borrowing for a few days.

My test drive — or ride — was on a Black Label model, though red-orange in color. It also was equipped with a handlebar-mounted smartphone holder and a heavy-duty, fold-up bike lock that stored under the seat. Other options that would be handy for users are a cup holder and a cargo basket that attaches above the front wheel.

Not only does the bike lock secure your URB-E when parked, but there’s a car-style key you need to start it as well. But weighing just 35 pounds and folding into a 20 x 35 x 17-inch space, URB-E is easy to carry into a trunk, onto a commuter train or to store in a closet or under your desk or work bench or in a corner of your office.

To ride, you pull the seat into place, make sure a locking pin is in its proper position and then give a quick tug on the handlebars to snap everything into place. Turn the key, depress a red button on the handlebars, make sure the three lights indicate you have power and use the motorcycle-style twist control to start rolling down the road. There’s a bicycle-style hand brake when you need to stop or slow.

There are foot pegs on both arms. Gilfillan suggested using the rear pegs at first because, until you feel really comfortable and familiar with riding, your feet on the front pegs might interfere with steering.

I still have a scar on an elbow from the time I tumbled off a bicycle and I’ve never ridden on a motorcycle, so it I took me some time to feel comfortable, keeping my balance and controlling throttle and steering and maneuvering among pedestrians and race cars in the Laguna paddock. I was more comfortable back in town where I wasn’t at risk of slamming into — or being run over by — someone’s million-dollar vintage race car.

Bob Golfen also took a spin. He’s a long-time motorcycle rider and he took to URB-E immediately, riding and gliding and turning as if he’d done this before.

Gilfillan said the unit I rode already had some 2,000 miles of use yet it looked and felt brand new, except for a balding front tire, perhaps from first-time riders spinning the tire — URB-E has front-wheel drive — as they try to get moving on a vehicle with so much torque that comes on so quickly. Bob Golfen’s solution was a simply push off maneuver to get rolling and then feathering in the power.

The ride was comfortable. Suspension is by a single shock absorber with a 1,200 pounds/inch spring.

The 36-volt battery can be recharged from empty in four hours and powers a 250-watt brushless electric motor.

Gilfillan said URB-E has proven popular so far with vintage races and with RV owners, even though it’s primary target audience was commuters looking for a ride for that last mile to work or home.