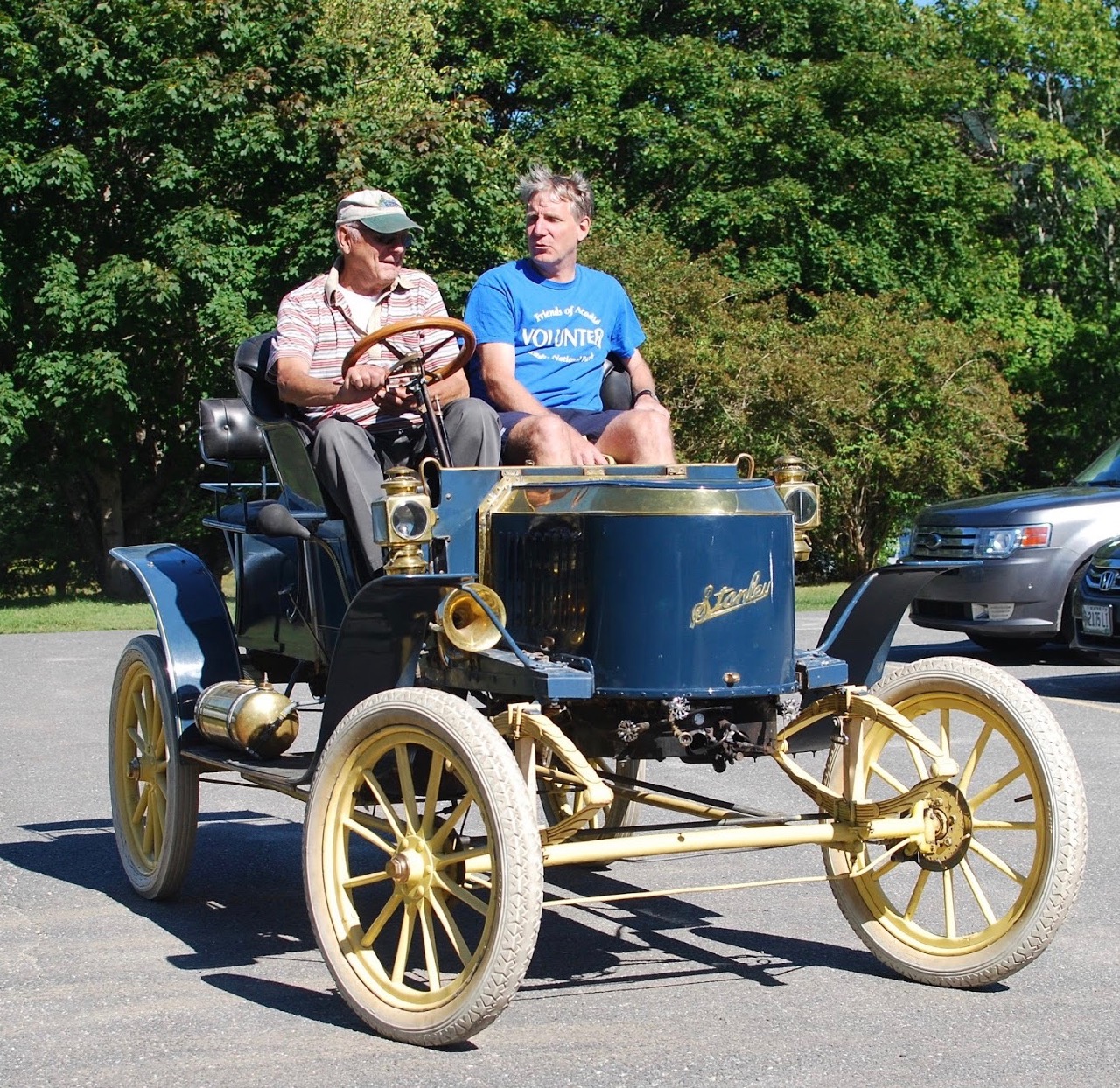 We recently reported about a cooperative effort between the Frist art and Lane auto museums in Nashville. The Porsche and Mercedes-Benz museums in Germany also did a recent joint venture, swapping some cars and offering reduced admission fees for people visiting both facilities. We applaud such linkage. Here’s another example of museum’s working together:

Now the folks at the logging museum have lots of expertise when it comes to steam engines, what with a locomotive-like, steam-powered Lombard log hauler they restored and operate. So they made the hour-and-a-half drive back to Seal Cove a few days later and applied their expertise to help the Seal Cove crew get the brass era Stanley Steamer running smoothly.

Herb Crosby of the logging museum recorded the events both as photos and did a short video of the group effort.

Everyone most likely knows the tale of how the Chrysler Norseman concept car went down with the SS Andria Doria after it collided with the MS Stockholm off the coast of Massachusetts in 1956. But there was a fascinating story recently on a Michigan newspaper group’s website about a trove of classic cars submerged some 450 feet beneath the surface of Lake Michigan since the SS Senator sank about 15 miles east of Port Washington, Wisconsin, on a foggy Halloween day, 1929. The cars, the ship reportedly carried 260 of them, were new Nash models on their way from the assembly plant in Kenosha to dealers in Michigan and points east.

“Those cars on the inside are in pretty good condition,” Tamara Thomsen, maritime archeologist and shipwreck diver from the Wisconsin Historical Society, told MLive.com.

The story noted that the Senator sank after colliding with the SS Marquette, which was carrying iron ore from Michigan’s Upper Peninsula to steel mills in Indiana. Ten crew members died as the Senator sank in just eight minutes. The Marquette was able to make it to Port Washington.

The story reported that both ship’s captains were found equally at fault for the collision.

Those of a certain age will remember when Porsche 907s, 908s and 917s were equipped with long tails for better high-speed aerodynamics at places such as Le Mans’ Mulsanne Straight. With Porsche racing — and winning Le Mans — with its new 919 hybrid, it figured that someone would design a new Porsche long tail.

As reported by CarBodyDesign.com, the Porsche 908-04 is a modern if virtual interpretation of the 1969 908 LH.

“It is a bit of a forgotten idea, so I thought it would be a ‘rebirth of an icon’ that would generate nostalgia in car and Porsche enthusiasts alike,” CarBodyDesign quoted exterior designer Alan Derosier, an exterior designer at Chinese car company Cherry and who, like the others on the six-person Porsche Vision GT design team, did the Porsche as a “free-time” project.

While on the subject of China, The New York Times recently reported that Chen Dongshen, head of China’s Taiking Life Insurance company and founder of China Guardian Auctions, has become the largest shareholder in Sotheby’s, with 13.5 percent of the stock in the parent company of RM Sotheby’s.

While catching up on the news last week after returning from Monterey Car Week, I neglected to include this important item:

It was at the SEMA Show in 2013 when Danny Thompson announced plans to fulfill his father’s dream by completing the Challenger 2 and take the streamlined vehicle to the Bonneville Salt Flats.

In 1960, Danny’s father, Mickey Thompson, had reached 406.6 mph in the Challenger I and would have broken a decades’ old speed record for piston-powered vehicles — and by nearly 100 mph — had Challenger I been able to complete a second and mandatory run.

Mickey Thompson was a mechanical genius and automotive innovator who built radical Indy cars, set a variety of speed records, and created off-road stadium truck racing before being shot and killed in 1988, not long after suggesting to his son that they complete Challenger 2 and go for the record.

Well, after three years of fund-raising, mechanical work and waiting for the salt to be speed worthy, last month Danny averaged 406.7695 over two runs in the Challenger II for an official Southern California Timing Association AA/FS class speed record.