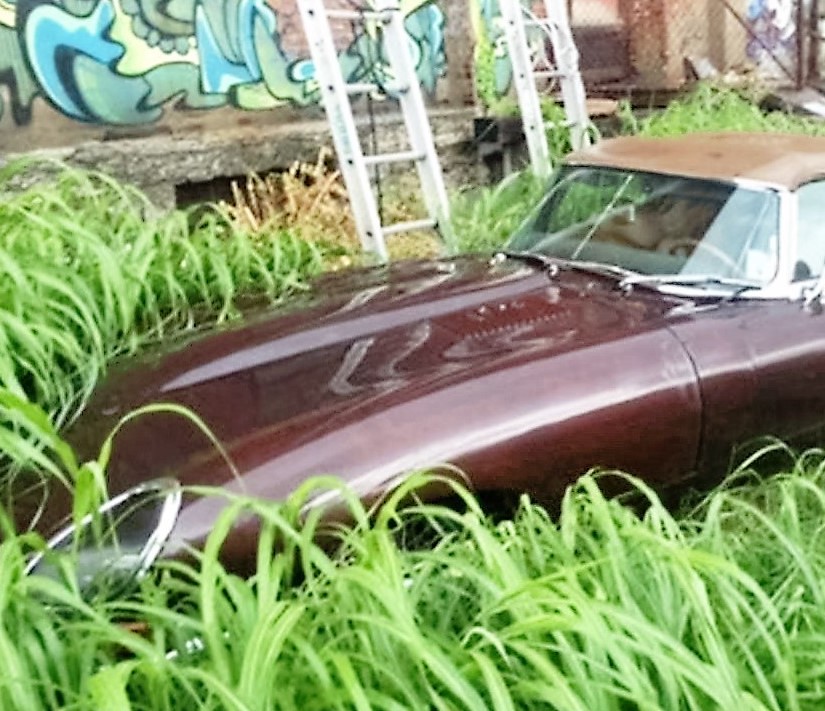 OK, I admit it. The only reason I chose this Pick of the Day is so I could run this exceeding weird picture. It shows a Jaguar XK-E convertible awash in tall grass looking like a stricken ship at sea, stuck behind some old buildings where it’s apparently been for some time, barely visible because of the foliage.

The vibrant graffiti art on the brick walls only adds to the eerie strangeness of this shot.

In the ClassicCars.com listing, the 1969 Jaguar E-type Series II is described by the Astoria, New York, dealer as “a great example for restoration.” In the scant description, the Jag is said to have a Series 1 straight-6 engine, though no mention whether it is a 3.8- or 4.2-liter unit.

The Jag also has had a Series 1 hood installed, the listing says, which gives it the desirable covered headlights of the earlier cars. Still, it’s incorrect and further dings the value of this convertible.

The XK-E is brown with a tan interior, the listing says, though no mention of a repaint or other restoration in the past. The car “has rust in the floors,” the seller adds, though there is no way from the photos to assess the condition of the rest of the body or chassis because of its grass shroud.

What a strange way to advertise a classic car for sale, unless the seller is also taken by the sheer artistry of the photos. That could be since the dealership is well-known on the East Coast as an interesting and creative place.

But back to business. The dealer describes the mystery Jaguar as “an excellent buy for only $37,500.” While I know that XK-E prices have grown in recent years, from what I see here, and it’s not much, the asking price seems like all the money and more for a car that is literally in the weeds.