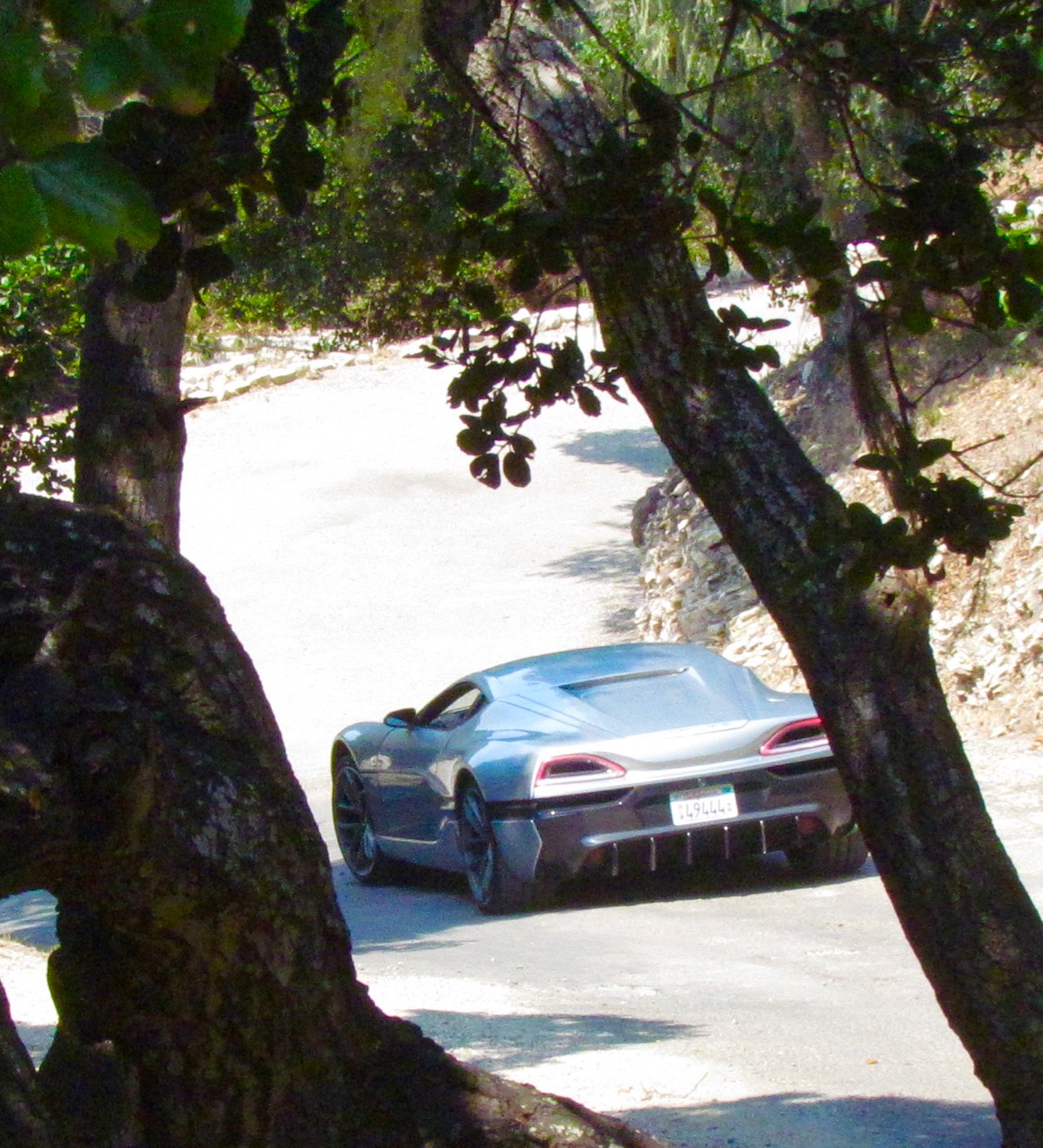 Once we reached a deserted stretch of roadway, Mate Rimac asked if I wanted to feel the full accelerative power of the Concept_One. I responded in the affirmative. Rimac tapped various places on the iPad-like device on the car’s center console, secured his grip on the steering wheel, and I assume he floored the accelerator because I was thrust back against my seat by g forces sufficient to keep me from expanding my lungs to inhale.

By our third such sprint, I’d learned to force myself to breathe as the electric car powered forward.

You read correctly. The Concept_One is an electric car. In fact, fresh from beating a LaFerrari in a drag race, Concept_One is the world’s fastest electric car and among the fastest period in acceleration as it reaches its electrically limited top speed of 220.5 mph (355 km/h).

Oh, and the Concept_One is not at all bad looking, either. The day after my ride, the car, styled by Adriano Mundri, who also has done projects for GM, Audi, Lamborghini, was displayed between the Aston Martin Vanquish Zagato coupe and the Vision Mercedes Maybach concept on the inner lawn at The Lodge at Pebble Beach during the concours d’elegance.

Oddly, at least to me, is that Concept_One is owned by my mother’s eye doctor, who is not a car guy at all yet is a major investor in Rimac Automobili, the Croatian car company that developed the electric supercar.

Three years ago, I was visiting my mother in Florida when her eye doctor told me he was investing in a start-up electric car company. I might have expected his medical partner, a long-time Ferrari owner and collector, to invest in a European sports car company. But Dr. Paul Runge’s idea of a cool car was a Toyota Prius hybrid, though I think that at the time he had just switched over from the hybrid to leasing a Nissan Leaf, an all-electric vehicle.

Though not a car enthusiast, Dr. Runge is concerned about the environment, about reducing the use of carbon-based fossil fuels and making the world a better place for “our kids and their kids.” A pediatrician before specializing in eyes, and even though most of his patients are senior citizens, Dr. Runge still is called on in extreme pediatric opthalmological cases.

He’d read a story in The Wall Street Journal about Mate Rimac’s startup car company. He sent an email to Croatia. Then he traveled to Croatia and met Rimac and his 12 employees. Dr. Runge said he was “awestruck” by what he saw, and by the potential not only for the car but especially for the technology being developed. At the time, Rimac was 23 and his eldest employee was only 26.

The good doctor invested. Honestly, I feared he was throwing away his money. I was wrong.

Mate Rimac had been a teenager attending a technical high school in Zagreb when, for the final exam for one of his classes, he had to build something, something that applied current technology in a practical way. Rimac created a glove that functioned as a mouse and keyboard to remotely control an internet-connected device. His invention was judged the best among the school’s students. Then it won at the national level. And then in international competition.

Rimac said he’d always considered himself just an average student, but after he won, and “won all over the world,” it “gave me confidence,” he said, confidence to attempt to follow in the footsteps of his childhood hero, fellow Croatian native Nikola Tesla, the electrical engineer, inventor and futurist.

Rimac was still a teenager when he created a blind-spot system to warn drivers of traffic approaching from the rear. At 18, he licensed that system to a European automotive supplier and used the income to pursue his dream of becoming a racing car driver. He bought a mid-’80s BMW, but it wasn’t long before the engine blew.

Convinced of the superior power of electric motors, Rimac turned his Bimmer into an electric vehicle and started winning the drifting competitions he entered. He also enrolled in college. But he dropped out of school to pursue practical applications for his technological innovations and his belief that the next generation of sports cars, of extreme supercars, could be and would be powered by batteries and electrical motors.

Concept_One has four electrical motors, one operating each wheel through Rimac’s proprietary all-wheel torque vectoring system, which is manipulated via the tablet computer screen in the car’s cockpit and which can make the car front-, rear- or all-wheel drive, or seemingly any combination thereof as conditions demand. He even demonstrated how you can even set it up so you don’t need the brakes while driving on a steep downhill grade; simply lift off the throttle and the electric motors slow the wheels. Dr. Runge said the car makes him a much better driver.

Or drive more conservatively, like the good doctor, and you have 250 miles of range or, as Rimac noted, “20 to 25 minutes on a race track.”

Dr. Runge’s Concept_One is the fourth one built but the first one delivered to a customer. It is the first of a limited run of only eight such vehicles, the next seven being offered at a suggested retail price of $1.2 million. The first three cars were prototypes built to develop and prove the technology.

Dr. Runge already has driven his car in the Nikolai Tesla EV Rally, a five-day, 1,200-mile event in Europe. The car was in Monterey for display at Pebble Beach and to offer rides in the preceding days to potential buyers. From Monterey, it was headed to Detroit for EPA and DOT certification before the doctor takes delivery in Florida.

Interesting fleet he’ll have: He’s on his third Nissan Leaf (annual lease) and has a Tesla S and Tesla X.

Meanwhile, Rimac, 28, and now with 200 employees, also produces electric bicycles and electric power units for boats, is very involved with the Formula E racing series, is working with several major automotive suppliers on projects, is well along with the company’s second car project, and is eager to talk with major automakers about licensing his technology for much wider and more affordable usage.

Actually, while his company’s name may be Rimac Automobili, “our company is about technology,” Rimac said. The Concept_One car is just the showcase, albeit a very nice and very fast, even breathtaking showcase.