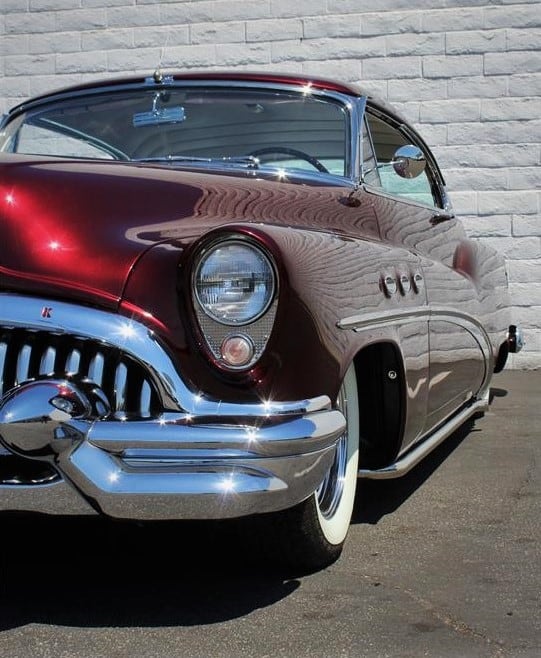 It’s one thing to modify a vehicle and create a totally outrageous – sometimes unrecognizable – custom car, but sometimes more impressive are the builds with nearly unnoticeable modifications, allowing the car to retain its classic look with recognizable lines.

The Pick of the Day, a 1953 Buick Super Riviera, is such a build featuring subtle modifications for an overall exceptionally clean look with a paint color that can only be described as out of this world.

According to the listing on ClassicCars.com, just over 1,000 miles have been placed on the Buick since its recent frame-off restoration that included the frame being cleaned, powdercoated, and modified to accommodate the front suspension’s 2-inch drop spindles created by Fat Man Fabrication, and modified A-arm set up made to fit the air-ride system with custom shock mounts.

The listing notes the air-ride system can be controlled from inside via a series of switches and gauges located under the dashboard, while the compressor and tank have been hidden in the trunk behind a false panel.

Subtle changes and modifications can be seen in the body of the Buick – it features slight fender flares molded to the body for a seamless look. The headlights have been modified to fit the Buick while the taillights and reverse lights have been fitted to the re-chromed rear bumper’s original exhaust outlets.

The listing adds that other custom touches include a shaved trunk and hood, and the re-chromed front bumper has been worked to accept Dagmars from a 1955 Cadillac. The stainless-steel moldings seen on the Buick were buffed and polished, while the car has received all new glass and weather seals.

The car was originally painted two-tone Ridge Green and Terrace Green, the seller says, but has been repainted with House of Kolor Candy Red. The polished look is complemented with a set of Cadillac wire wheels wrapped in B.F. Goodrich Silvertown radials.

“Under the hood,” the seller says, “the original 322 cubic inch Nailhead V8 has been swapped for a later 322 from a 1956 Buick Century.” The seller adds the later V8 “produces about 90 horsepower more but looks all original, and is backed up by a Dynaflow automatic transmission out of the same ’56 Century.”

The entire car has been fully insulated with Dynamat to keep road noise to a minimum inside the pearl white vinyl and maroon carpet clad cabin, the seller says.

The “gauges have been completely rebuilt and the speedometer was reset to zero,” the seller adds, and the car features creature such comforts as power steering and brakes, Vintage Air system, in addition to a custom stereo.  The amp, receiver and 6-CD changer have been hidden in the trunk near the Air Ride compressor and tank.

Offered for $54,500 by a dealer in Carson, California, the seller says the car has “all the style of a classic fifties custom and the amenities of a modern car; driving it is a real pleasure.”