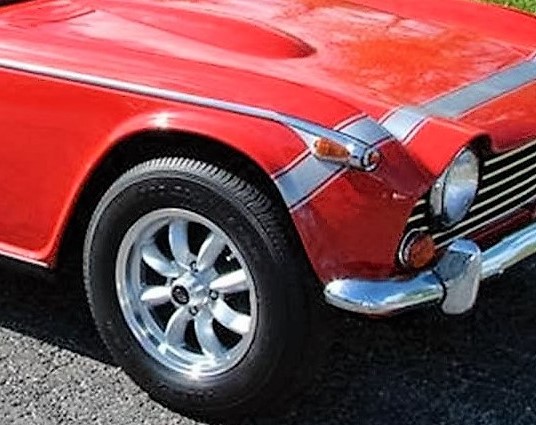 The Triumph TR250 has a distinctive stripe across its hood

British cars in the late 1960s were all about taking what they already had and rearranging it into a sort of stopgap measure to provide performance to their customers without incurring the increased costs of redesigning their old cars. Some of these efforts were weak but others were nothing short of brilliant.

Such as the Pick of the Day, a 1968 Triumph TR250, in which the company took the aging TR4 and TR4A and increased performance at minimal cost. The designers at Triumph thought that by adding an inline-6 to the TR4, they could get a proper sports car up to the task of modern expectations.

This Triumph looks straight and clean

The TR250 body and chassis were all TR4, from the stunning Michelotti-designed body to the less-stunning TR4A IRS chassis. The build quality was still behind MG, but the TR250 offered classic Triumph TR looks with a very capable engine. The result is the high-water mark for all Triumph sports cars of any era. The TR250 is a car that is both beautiful and properly fast.

Added on features for the new model were safer seats mandated by the government for 1968 (they have headrests), as well as a stylish stripe along the hood that helps differentiate it from the earlier TR4s.

The TR250 advertised by a Washington, Missouri, car dealer on ClassicCars.com looks from the photos to be in nice shape, with good panel gaps and nice paint in the correct Signal Red color. According to the seller, the convertible has a new top and new Panasport-style alloy wheels, and is a nice-driving, solid car that spent all of its life in Texas and Louisiana, which reduces the chances for rust.

The wooden dash looks to be in good shape

The TR250 was for years largely forgotten, being overshadowed by its very popular replacement, the TR6. If you know the TR6, then you know the TR250 is basically the same car under its skin. Over the past few years, the 250 has come into its own with a traditional design that has won the hearts of many sports car fans.

The single-model-year TR250 is the rarest of all classic Triumph sports cars and should have a way to go up in price. We have seen the British versions of this car, called the TR5 (it was fuel injected in the UK) sell for more than $60,000 at auction, which could make this TR250 a good investment.