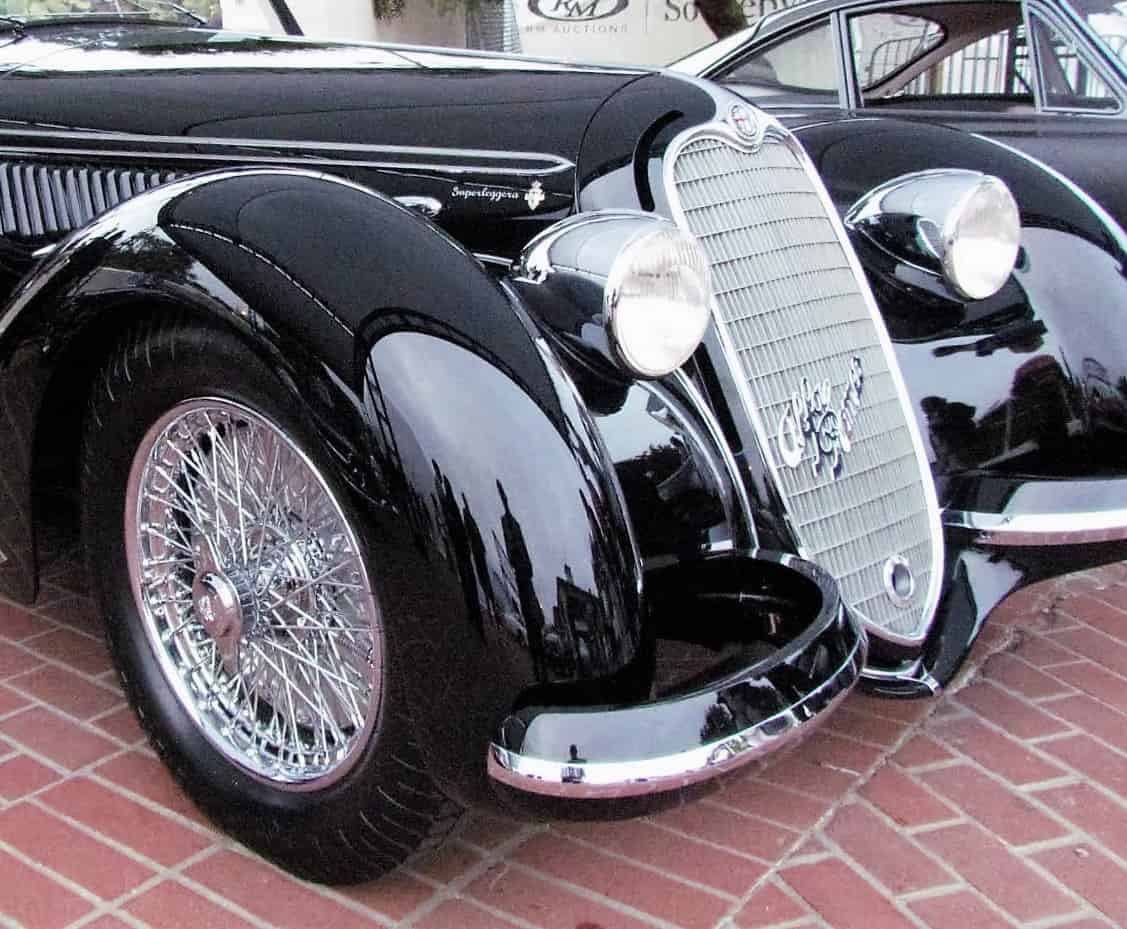 1. You do not sell nearly 90 Porsche cars at the same auction.

2. If you have a very-rare, high-dollar car, you do sell it at auction.

4. For more-common Enzo-era Ferraris, the market is flat as it is for 308s and Testarossas.

5. If you have a truly important historic racer, you sell it nowhere else than at Monterey.

The Monterey auctions this year were a bit of a mixed bag. Most did well but a few struggled. None of the auctions in Monterey did badly, but there were definite winners in the mix.

Let’s start with the winners – RM Sotheby’s and Gooding & Company.

This is probably the most telling number of the week as they had 49 fewer cars (no Pinnacle collection as last year) yet they still sold 82 cars for an average of 1.4 million dollars each. These are strong numbers and on top of that they set records for the highest-priced British car ever sold at auction, the Le Mans-winning Jaguar D-type at $21,780,00, and the record for the highest-priced American car sold at auction with the first Shelby Cobra selling for $13,750,000.

The top 5 cars from RM Sothebys were:

These are strong numbers but even more impressive is that RM Sothebys sold 24 cars in excess of $1 million. This makes for a very good sale indeed.

Last year, Gooding reached $128.1 million with 115 of 129 car sold for an 89 percent sell-through rate at an average per car price of $1,113,896. It looks as if the cars offered from Gooding, just like at RM Sotheby’s, were of very high quality, and the numbers show this.

The top 5 cars from Gooding were:

The 166 Ferrari is an amazing car and my favorite of Gooding’s sale. Another amazing thing about the Gooding sale is that 26 of the 115 cars sold for more than $1 million. This is a strong statistic and has to be a record for a Gooding sale in Monterey.

Bonhams results were down compared with last year’s, with more cars sold but for less money. Bonhams made $34.6 million dollars with 101 of 115 cars sold for an 88 percent sell-through rate at an average price of $342,998.

Bonhams was smart managing their consigners, though, by offering a larger number of their lower-priced cars at no reserve, and those with a reserve were reasonable. This seemed to pay dividends in results for what is a buyers’ market for those cars.

The top cars at Bonhams were:

Similar to RM’s and Gooding’s results, eight of the 101 cars offered sold for more than $1 million.

Mecum sold 70 more cars last year than this year. They also offered more cars this year than last year, including 89 Porsches. I am not sure it was such a great idea to auction 89 Porsche cars at a single sale, especially when the early Porsche market is softer than last year’s. Less than one-third of the Porsches were sold.

That being said, Mecum sold some fantastic cars for strong money, moving up a notch in quality at their Monterey sale.  Of the top five cars sold, four of them were modern exotics.

Top sales at Mecum were:

Like Bonhams, Mecum sold eight cars for more than $1 million, our favorite of those being the Ford GT40 road car.

Also like Bonhams, Mecum had a number of great values at their sale as they always do. My favorites were the Frank Sinatra 1989 Jaguar XJS which sold for $27,500, a 1973 Jensen Interceptor 3 convertible for only $34,000 and a restored 1954 Olds Super 88 Convertible for $29,000. All of these were great deals with the Interceptor being a fabulous buy.

The Monterey auction that tends to be the most fun to attend is Russo and Steele. Russo had a solid sale with a total of $10.5 million dollars with 117 of 228 cars sold for a 51 percent sell-through rate at an average price of $89,744

While sales were a bit off from last year, the average price was up, which speaks to the improved quality of the cars they had on offer.

The top cars at Russo and Steele were:

These were all quality cars and sold for market-correct prices. Russo generally has something for every budget. My favorite of the Russo lower-end cars was one that I had seen only once before, a Volvo 1900 convertible. Volvo’s first sports car, one of only 60 built, sold for an astoundingly low $60,000 for such a rare car. The modest sale price can be attributed to these cars being relatively unknown, plus the somewhat scruffy condition of this example.

Rick Cole auctions has not released sales information from its smartphone auction, so we have no idea as to what sold there or for how much.

Looking at these sales totals, note that there were 114 fewer cars offered this year and $62.1 million less earned compared with last year’s sales. But you need to dig deeper to see what is going on.

First, RM Sotheby’s had a three-day sale last year with the first day made up of the Pinnacle Collection of multi-million-dollar cars. This alone explains much of this year’s money difference from last year.

Next, the lower end cars on the market, say the sub-$100,000 cars, are getting harder to sell, and their values have leveled. Adding to this are owners still looking to achieve last year’s money for these cars and setting unrealistic reserves. This caused a number of no-sales at both Mecum and Russo for cars that should have sold for the highest bids.

In a nutshell, the collector car market did not crash in Monterey but finally settled down to a sustainable level. The important (i.e. very expensive) cars seem to be completely insulated from this and as a result, they remain as safe investments.

On the other hand, if you are looking for a quick flip on a MG, Jaguar or Porsche, you might want to consider waiting for the market to perk up for these cars. For buyers, follow the rule that it is always best to buy the car you really want and to pay a fair market price for it.

Then no matter what the market does, you will have the car you always wanted. And since so many of the more-affordable cars have dropped a bit in value, now might be the time to realize that dream.