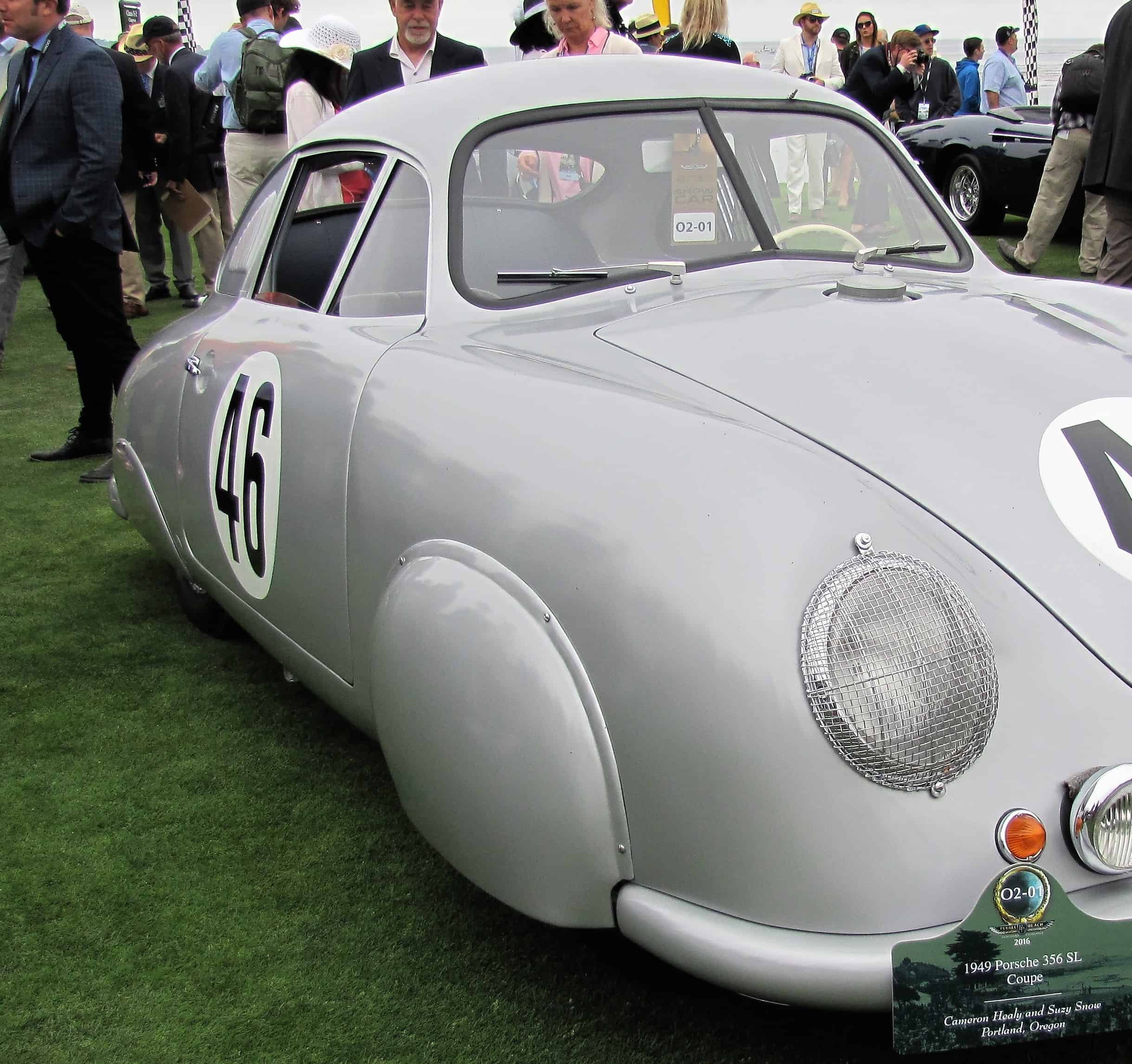 Monterey Car Week seems so overwhelming at the start. Great cars everywhere you look, too much to do, too much traffic – which is kind of ironic since most of the vehicle occupants are there to see cars – so many old friends to greet, and just the whole atmosphere of automotive overindulgence.

This was, I think, the fifth time I’ve been on the Monterey Peninsula to partake in the various concours, car shows and auctions that culminate in the greatest classic car event in North America, the Pebble Beach Concours d’Elegance. Be there or be square, as they say, and familiar car folk that range from buddies from back home to such celebrities as Jay Leno all make the scene. Celebrity sightings are common occurrences.

Part of the lineup of champion Ford GT40s at Pebble Beach

Yes, crowding is a problem as everyone and their Uncle Henry mill around the cars parked on the 18th fairway, making picture taking a challenge. Patience is key. The moment eventually comes when the crowd parts like the Red Sea and, if you’re quick, you can get that shot.

Pebble is an exuberant affair with so many fantastic old cars, most restored to the nth degree and vying for prizes, others presented in more relaxed condition, such as those magnificent veterans in the Preservation Class.

For me, the week basically began Tuesday with the enjoyable Concours on the Avenue in picturesque Carmel, which is a great way to ease into the madness. It’s always one of my favorite events, with the feel of a local car show except for the extraordinary, high-end vintage cars that show up.

People always ask, “What was your favorite car in Monterey?” a question that’s nearly impossible to answer. But for once, I have one, although some might find it an odd choice considering all the automotive finery from which to choose.

No, not the red BMW 507 in Carmel nor any of the fine Bizzarrini sports cars at Pebble. Not even the gorgeously preserved 1953 Ferrari 375 MM Pinin Farina Spyder that won best of show at The Quail Gathering.

Being a Porsche 356 guy, I stood in awe at the sight of the most profoundly historic race car from the early days of the marque, the 1949 Porsche 356 SL coupe. The odd-looking coupe with its aerodynamic wheel-cover additions ran in the 24 Hours of Le Mans in 1951, finishing first in the 1,100 cc class and 20th overall, marking Porsche’s first victory in an international race.

I’ve seen so many models, pictures and posters of this car. I was deeply impressed to encounter it at the great concours, tucked away among so many other significant automobiles. For a Porsche geek, it was the most-memorable car of the entire Monterey week.

Here are a few other favorite things from Monterey week:

People watching – There is so much wealth floating around during Car Week, and so many folks out to flaunt it, some with more success than others. The Quail Gathering had the best sightings of garishly colorful men’s pants and dramatic ladies’ hats. Where do guys get all those candy-colored suits? And the men’s shoes, some of which look like slippers from 1001 Arabian Nights.

Ruben Ruiz grins from his 1958 Fiat Multipla at Concorso Italiano

There also are some favorite people I met during the week, such as Ruben Ruiz at Concorso, who was so delighted to show me around his 1958 Fiat Multipla 600 painted to match the yellow-and-white Multipla owned by Leno. Ruiz was joyous and enthusiastic, and made me happy just to be around him.

Also, Harrod Blank, the guy who brought the whacky Volkswagen Beetle “art car” to the Quail, piled high with all manner of bizarre objects. The car is named “Oh My God!” because that’s what people say when they see it for the first time, Blank said. I met him years ago when he came out with his first movie celebrating art-car culture. It’s called Wild Wheels, and well worth seeing.

The Alfa Romeos – Concorso was awash with all kinds of lovely Alfas as the event celebrated the 50th anniversary of the Spider Duetto sports car, made famous in the movie, The Graduate. Those and the earlier Alfas get me every time.

The Porsches – My colleague Larry Edsall calls me a Porsche whore, which I do not dispute, and the greatest sightings were, naturally, at the Porsche Werks Reunion, but also at the Carmel concours. The auctions offered 168 Porsches for sale – Mecum alone had 90 of them – and they constituted a large percentage of all the collector cars offered. I’m looking into how they did at auction and will file a report in the coming days.

The Delahayes – The coachbuilt awesomeness of the collection at Pebble was a sight to behold. I’m not usually a Figoni kind of guy, but those wildly over-the-top creations with their pontoon fenders kept my camera busy.

Dog sightings – Monterey car shows are the kinds of places where people feel free to bring their pet pooches, particularly at the Carmel concours, not so much at Pebble. I took many photos of cute dogs, but I’m including only a few of them.

While Monterey Car Week is a load of effort as we at ClassicCars.com strive to post our coverage of the many events live, as soon as they happen. But the late-night typing and sorting through photos is well worth the unmitigated enjoyment of what many car folks refer to as The Best Week of the Year.