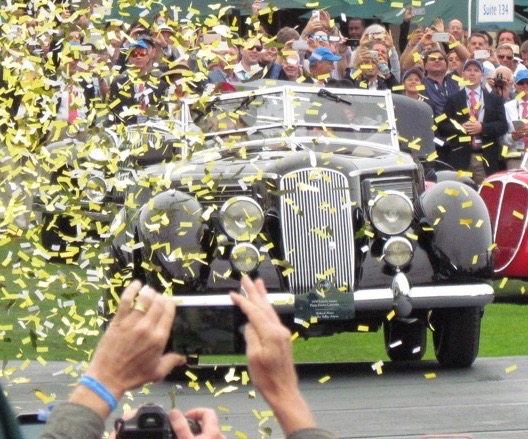 The Lancia was one of six such “Tipo Bocca” cars created for a dealer in Biella, Italy. Each of the cars was produced with unique features. The Pebble Beach winner was equipped with a power top, curved side windows, engraved body-side trim. It also came with a basket-woven interior, skirted rear fenders and wood-grained instruments, which were not metric because the car originally was delivered to a British owner.

The car was rediscovered in poor condition in the early 1960s and was sent to Pininfarina, which undertook the restoration at its own expense to keep the car intact. After that restoration, the car was sold to musician Eric Clapton, who reportedly declared that the car had provided him with “the most fun I’ve had offstage and out of bed.”

After his ownership, Clapton sold the car back to Pininfarina, which had the car on display in the design house’s own museum. Richard Mattei of Paradise Valley, Arizona, acquired the car and consigned it to Gooding & Company’s 2010 auction at Pebble Beach. Bidding did not meet reserve and Mattei started a multi-year restoration project  that concluded with the car’s stunningly successful concours debut this weekend at Pebble Beach, where it won the European Classic Early class to qualify for Best of Show consideration.

“I was just happy to be an entrant at Pebble Beach — and now to get an award, and not just one, but three!” Mattei said after his car also took best in class and the award as the most elegant convertible on the show field.

“This Lancia is a true combination of speed and style,” concours chairman Sandra Button said in a news release. “Pinin Farina took a fantastic car and added many spectacular attributes, including a power top, curved side glass windows and the unusual basket-woven trim. This car is sport and luxury embodied.”

When asked what he found most compelling about the car, Mattei commented on its  mechanical sophistication and an ability to exhibit two different personalities — an aggressive stance with the top up and a more relaxed and elegant style with it down.

The 1938 Delahaye 165 was best of class in the featured Delahaye Prewar category and was a former Paris Auto Salon car built on a Type 145 racing chassis and powered by a V12 engine. The car formerly was owned by Adrian Conan Doyle, son of Sherlock Holmes author Arthur Conan Doyle, and became part of the collection of the late Robert M. Lee in 1988.

The 1931 Stutz, which won the American Classic Open class, was part of the last run of that company’s straight-8 cylinder cars. There were some 200 produced wearing bodywork by the top American coachbuilders. The Pebble Beach runner-up is believed to have been a one-off prototype design by LeBaron and was delivered new to Argentina and its heavyweight boxing star Luis Angel Firpo.

The car, now owned by Joseph and Margin Cassini III, returned to the U.S. in the mid-1960s and underwent a restoration to return it to original specification with its original parts. The Cassinis had won Best of Show honors twice at Pebble Beach, in 2004 with a 1938 Horch and in 2013 with 1934 Packard.