‘Fast from the Past Motorcycles’ opens at the Simeone 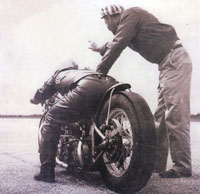 Beginning Saturday and running through September 9, the Simeone Automotive Museum features a motorcycle exhibit, the “Land of the Rising Sun, Mid-Century Motorcycles and Fast From the Past.” The collection has been put together by John Lawless and his cadre of bike enthusiasts to showcase competition flat-track racers, motorcycle drag racers, Japanese motorcycles from 1960-1989 and mid-century modern motorcycles that demonstrate the optimism of early postwar design.

The exhibit begins Saturday with a “kickstart” launch party from 5:30 p.m. to 9 p.m. Chris Hand, motorcycle drag racing legend and pilot of the Redneck Express Top Fuel bike, will be in attendance.

Shortly after, the museum holds the sixth annual Retro Truck Show is September 10-11, featuring approximately 250 trucks produced between 1960 and 2000.

The LeMay Marymount in Tacoma, Washington, holds its 39th annual LeMay Car Show in Saturday, August 27, from 9 a.m. to 5 p.m. The show includes assortment of over 1,000 vintage vehicles with additional collections of dolls, antiques, and other memorabilia.

The museum has opened registration for the 2016 Vets N Vettes car show, November 3-5, and invites veterans to the museum and the museum’s track to go for rides in participant’s Corvettes.

The America on Wheels museum in Pennsylvania invites all makes and models of cars to the outdoors Car Tunes event, August 27 from 11 a.m. to 3 p.m. The museum recommends guests bring beach chairs, pop-up tents, blankets, and lunch to enjoy DJ Jimbos tunes at the museum’s developing waterfront.

On October 6-7, the AACA Museum in Hershey, Pennsylvania, holds “Cars & Coffee” in its “secret garage” from 7:30 until 10 a.m. Donuts and coffee will be served.

Motorcycles featured at the Simeone museum

LeMay — America’s Car Museum in Tacoma, Washington, holds its last drive-in movie of the season August 27 on its Haub Family Field. Parking opens at 4:30, and the featured film, Jurassic World, will begin at dusk (around 9 p.m.).

August 27 is the date for the third annual Owls Head Transportation Museum Brainstormers Ball in Maine. Attendees are encouraged to dress in 1920s-inspired evening wear.