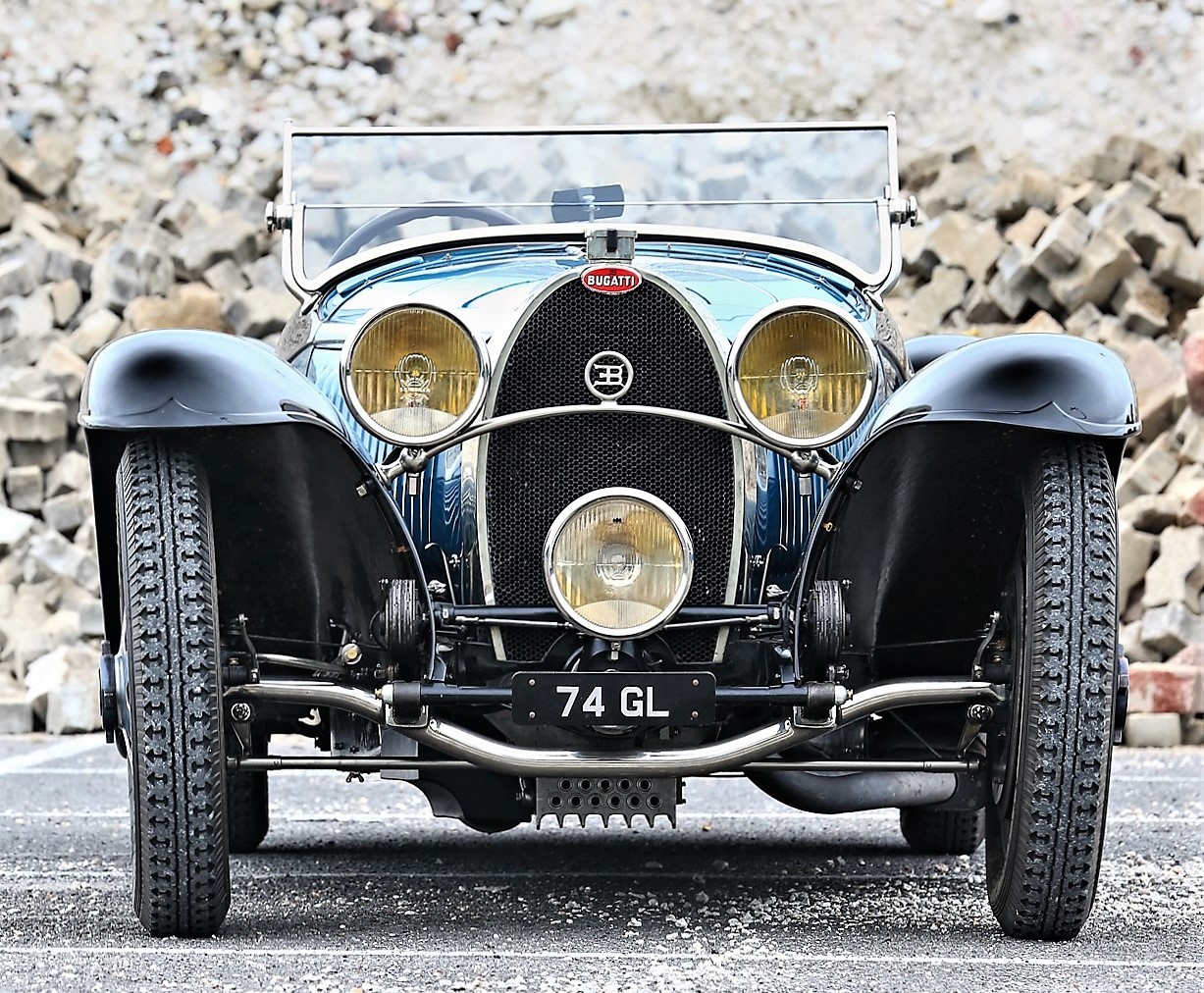 One of the most-beautiful cars at Pebble Beach this year, a 1932 Bugatti Type 55 Roadster, won’t be seen on the grass at the famous concours d’elegance but at the nearby Gooding & Company auction tent.

The Bugatti, which competed in Italy’s iconic Mille Miglia in 1932, is among the leading stars of the top-end Gooding auction. The sleek roadster, described as being in immaculate restored condition, naturally commands a towering price tag, in this case a pre-auction estimate of $10 million to $14 million.

Ettore Bugatti, in his famous bowler hat, at the 1932 Mille Miglia

What you get for that king’s ransom is not only a motoring masterpiece but a genuine piece of Bugatti history. Designed by Ettore Bugatti’s son, Jean, the roadster is considered among the most-attractive sports cars to wear the red Bugatti oval.

“Since its introduction, the Type 55 Jean Bugatti Roadster has been coveted by enthusiasts the world over,” the Gooding auction says in the car’s catalog description. “And the model’s elegance has been noted, with one knowledgeable Bugattiste calling it ‘a Type 51 Grand Prix wearing an evening gown’.”

The auction car, chassis No. 55213, is one of 38 Type 55s built between 1931 and 1936, according to Gooding, with just 14 finished as roadsters. One of the first Type 55s built, the car debuted at the Mille Miglia open-road race, where it was piloted by Bugatti’s legendary factory driver Achille Varzi with co-driver Count Luigi Castelbarco, who was an experienced voiturette racer. The car did not fare well in the competition, having to drop out after its fuel tank was punctured by a flying rock.

The supercharged roadster, which has a known history since new, was part of the extensive Bugatti collection of Nicolas Seydoux from 1983 through 2008, after which it underwent an extensive restoration in 2013 by marque specialists, who finished it in appropriate colors of French Blue with black trim and fenders.

“Toward the end of the restoration process, (Laurent) Rondoni built a new engine and gearbox for the car, exact replicas of the original components,” the description reads. “The current owner recently entrusted the car to (British expert) Jim Stokes, who installed the new components, road-tested the Bugatti, and carefully crated the original matching-numbers components for safekeeping. The original engine and gearbox, as well as all restoration invoices, photographs and records, accompany 55213 at auction.”

The Bugatti’s coachwork is original

The car does retain its original coachwork, chassis and other mechanical components, according to Gooding. The reason for the engine and transmission switch was not explained.

Bugatti historian David Sewell inspected the roadster in 2006 (before its latest restoration) and produced a report that confirmed the car’s authenticity and desirability.

“Overall, this is a truly outstanding example of the highly sought-after Type 55 Jean Bugatti roadster,” Sewell wrote. “It retains most if not all of its original component parts with matching numbers throughout, including that of its coachwork….

“Accordingly this car must surely rank amongst the very best of surviving Type 55 Bugattis; indeed it may well be the finest of them all.”

The Gooding auction, held in conjunction with the Pebble Beach Concours d’Elegance, takes place August 20 and 21 at the Pebble Beach Equestrian Center. For information, visit the auction website.