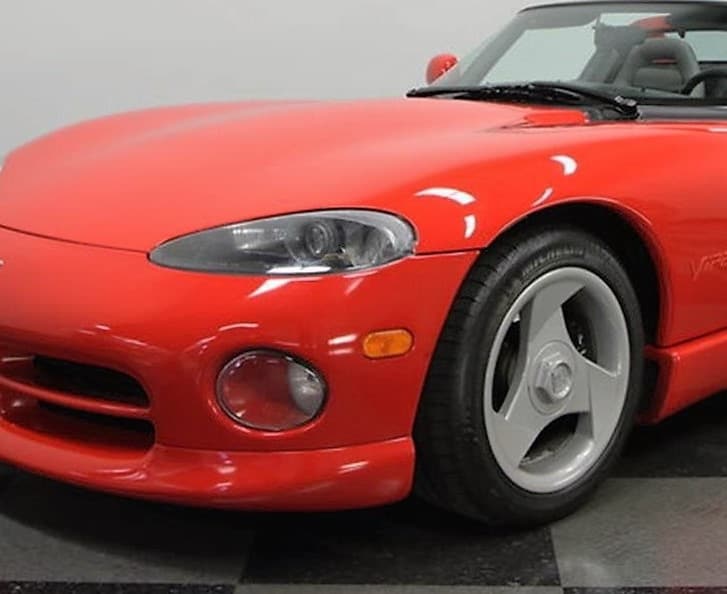 The 1993 Dodge Viper is in great condition with fewer than 10,000 miles on its odometer

The early 1990s saw the beginning of the true modern era for sports cars. It also was when performance cars started being loaded up with such features as all-wheel drive, traction control, stability control and other electronic nannies that made them easier to drive them faster but not necessarily more fun to drive.

Dodge, thanks to such visionary people as Bob Lutz, had a different idea. Why not create a superfast throwback sports car in the same vein as the original Shelby Cobra? So they started up a secret plan to create just that car, and they even went to the man himself, Carroll Shelby, for guidance. What emerged in 1991 was the Dodge Viper.

The Viper is a true roadster with no rollup windows

Just how much of a throwback is the Viper? Well, instead of roll-up windows in its doors, it actually has side curtains like an original Cobra, an MGTC or an Austin Healey 100M.

The Pick of the Day is a stunning low-mileage 1993 Dodge Viper significantly located in Lutz, Florida. The car is finished in desirable Viper Red and has only covered 9,609 miles since new, according to the seller, who notes that the Viper is a one-owner car that comes with the original window sticker and owner’s manual.

There is also a complete set of maintenance records that show plenty of recent investments in keeping this survivor Viper in top condition, the seller says in the listing on ClassicCars.com.  And the gray leather bucket seats are in great condition on this all-original car, according to the ad.

The early first generation Vipers have become one of the cars to watch in the collector car market as they offer old-style performance, astounding looks and limited production. When you combine that with service costs that are quite low due to the V10 Pushrod engine, then you have a car that is easy to own while delivering supercar performance and supercar styling.

The Viper dashboard is a letdown for such a special car

From behind the wheel of a Viper, the only letdown is the off-the-shelf Dodge switchgear, which make the interiors of Vipers look cheap. But those things disappear the minute you get under way.

The engine provides endless power and torque, and it never lets you forget that this car wants to kill you in the best possible way. It has no electronic gear on board to assist you as a driver, so you always need to pay close attention when driving one of these beasts.

The V10 engine has 400 horsepower on tap and a then-astounding 465 pounds-feet of torque. That power allows the Viper to cover a half mile in as little as 12.6 seconds with a top speed that exceeds 150 mph. All of this is done without traction control, launch control or stability control. The only driver aids in this car is what you bring to it as a driver, making it one of the last true drivers cars ever constructed.

Very few cars I have driven offer the visceral sense of speed and power that the Viper does, and if you have the skills to use one of these cars correctly, few others of its era will match it. However, if you lack the skills, I would recommend looking elsewhere for your high-performance supercar fix. In a Viper, it’s all too easy to accidentally do a 360 spin while making a leisurely left-hand turn.

We probably will never see a car like this ever built again, and I see these early first-generation Vipers having tremendous upside as collector car.

This car is priced at $37,995, which is right in the middle of the market for a Viper in this preserved condition and with such ultra-low mileage.