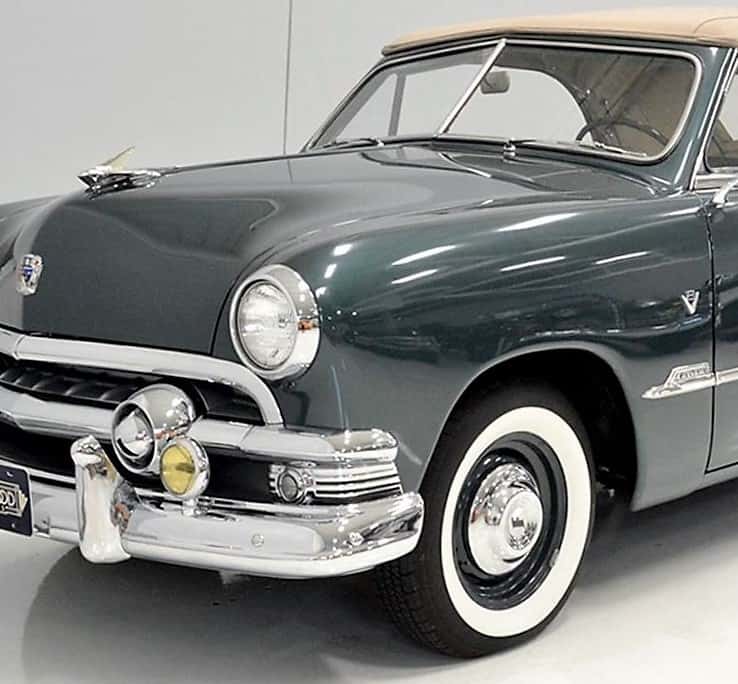 The 1951 Ford is described as being in immaculate preserved condition

With all the attention given to so-called barn finds and other such derelicts from the past, how great is it to discover an all-original, preserved classic that’s old enough to apply for Medicare yet shows remarkably low mileage, looks wonderful and is ready to drive.

The Pick of the Day, a 1951 Ford Deluxe convertible, has just 39,127 on its odometer and is described by its seller as a “spectacular survivor that runs and drives like new.”

“Incredible preservation, everything works, the very best 1951 Ford convertible available anywhere,” the Macedonia, Ohio, car dealer says in the ClassicCars.com advertisement, which includes a lengthy description of the car and a vast gallery of detailed photos.

“Originality only comes once and this is as good as original cars can get,” the seller says. “The doors open easily and close with a soft but solid click, the trim fits and lines up beautifully, and everything has a precise feel that often gets lost in a restoration. That’s why good original cars are so special –- they provide a benchmark to remind us just how good cars were back in the good old days.”

The ’51 Ford ragtop has been treated to such care and maintenance that it gleams, the seller says, although the ad does not indicate whether the car has had just one owner, as could be assumed by the description.

There’s a deep shine to its Hawthorne Green Metallic paint, sparkling chrome and an interior in which everything works, even the clock and AM radio, and leather seats that show the rich patina of judicious use, the seller says. “The back seat shows some age, but little wear, and like the front seat, replacement would probably be a crime.”

The original interior is attractively worn

The paint is mostly as it came from the factory, the seller adds, and looks better than any repaint could duplicate.

“There’s a soft shine that only original paint can offer, and the remarkable lack of nicks, scrapes, and other signs of use is testament to both the low mileage and the outstanding care that the car has received all its life,” the dealer says.

The top was replaced several years back, and the trunk looks fresh, the listing says, with an ultra-rare original cocoa mat on the floor.

The 239 cid flathead V8 is also in excellent condition, the ad continues, and it starts easily, idles smoothly and has “plenty of pep at any speed.”

“You can stand next to the car when it’s cold, reach in and turn the key, and the car will start almost instantly and settle into a nearly silent 500 rpm idle. It’s quite extraordinary.”

The photos show how well this car has been preserved, and it looks as clean under the hood as it does on top, with the correct copper engine paint glowing; the seller says it is unclear whether that is original or has been redone, but it certainly looks proper.

The Ford looks clean and authentic under its hood

“The copper engine enamel was probably freshened at some point, but then again, maybe not because this is a low-mileage survivor that has enjoyed the best of care since new,” the ad says. “It wears correct Ford script hoses, correct plug wires, and even the hose clamps are factory-issue.”

Fords from this era are often referred to as “shoeboxes” because of their square-rigged styling, and they are enduring favorites among collectors and customizers. This car obviously has never been messed with and never should be, which as the seller notes, “would probably be a crime.”

Because of its amazingly preserved condition, the asking price of $39,900 seems entirely reasonable.

“1951 Fords aren’t all that rare, but a car that has been this meticulously maintained and (retains) this much originality is truly a unique find,” the seller concludes in the ad description. “Please, go drive all the others, then come try this one on for size, because the difference between even a restored car and this remarkable survivor will really open your eyes.

“A car that has been loved this much rises to the top of the field, and the next owner will be sure to love it just as much.”