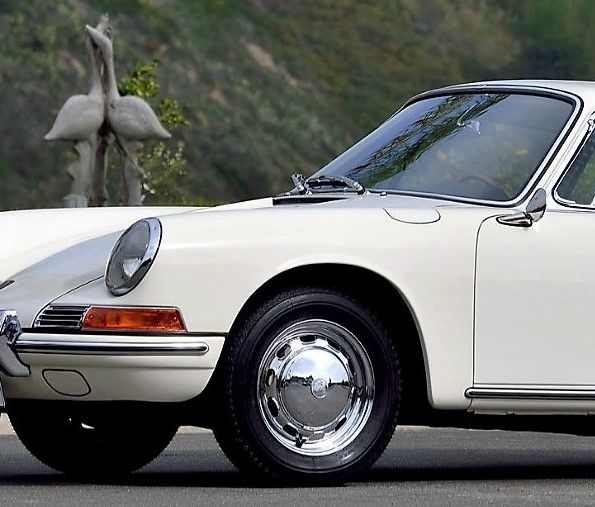 Porsche prices have been on a dramatic rise in recent years, especially for those cars with special performance features, racing history or celebrity provenance. Mecum’s auction in Monterey, California, presents yet another rare and unusual example, essentially a “missing link” between the original 356 models that established the brand and the subsequent four-cylinder 912 versions of the iconic 911.

The factory-documented 1965 Porsche 356B/912 coupe prototype is one of six cars built to test the automaker’s plan to create a less-expensive edition of the 911, which was introduced in 1963 to great acclaim but also some trepidation about its relatively high price. The idea behind the 912 was to market a sports car with the new look of the six-cylinder 911 but with the mechanical components of the beloved 356.

Six prototypes were built by taking the identical body structure of the 911 and installing the four-cylinder drivetrains in place of the flat-six engine. The result was a success and the 912s soon appeared in showrooms to be sold alongside the 911s and the final year of the 356 models.

The Porsche 356/912 at the Mecum auction, serial No.13415, is one of only two documented prototypes that survive. In light of its historic significance, Mecum has placed an ambitious value estimate on the car: $950,000 to $1.2 million.

The car’s unusual history was rediscovered largely by accident, according to the Mecum catalog description, when after being purchased as a parts car, the owner began to research why it had a five-digit serial number, like that of a 356, instead of the six-digit number of a 911 or 912.

“After receiving documentation from Porsche archives, the Certificate of Authenticity clearly identifies the model year/type of this car as being a 1965 356B/912 coupe prototype,” the catalog description says. “Another stroke of good fortune was that the car still had its original numbers-matching engine.

“Fully aware of the pivotal role this car played in the history of the Porsche 912, the process of disassembly and restoration adhered to a strict protocol with each piece being carefully examined and cataloged.”

According to Mecum, a further clue to the Porsche’s identity was a cloisonné badge on the rear engine grille that says, “1st U.S. Porsche Dealer Tour – Stuttgart – 19-22 July, 1965.”

“After fulfilling its intended purpose of being a test mule and presentation vehicle, the factory sold the car on August 25, 1966, to a new owner in Stuttgart, Germany,” the catalog says.

Hans Peter Porsche, who was head of Porsche production in 1965, identified the prototype when he examined the restored car in 2014 during that year’s Porsche Parade in Monterey, California, according to the catalog. He recognized it as the car he had seen at the factory when it was built.

The prototype has a number of different details from production 912s, such as its engine with a serial number falling within the range of those built for 356SC models in the 1964 model year. The transmission is a four-speed variation of the five-speed boxes found in the 911, and the front-suspension shock towers have different support mounts and plates. The door hinges are aluminum rather than steel as on the production 912, and the dashboard is painted body color rather than the aluminum applique applied to production 912s.

The 356/912 was professionally restored to a very high level commensurate with its place in history, Mecum says, with an emphasis on accurate materials and techniques. “

“This comprehensive restoration was acknowledged at the 2014 Porsche Parade Concours, where it was bestowed with the Zuffenhausen Award scoring 297.4 points out of a 300-point maximum,” the catalog says.

The Porsche will be auctioned on August 20, the final day of Mecum’s three-day sale at the Del Monte Golf Course in Monterey. For information, visit the auction website.