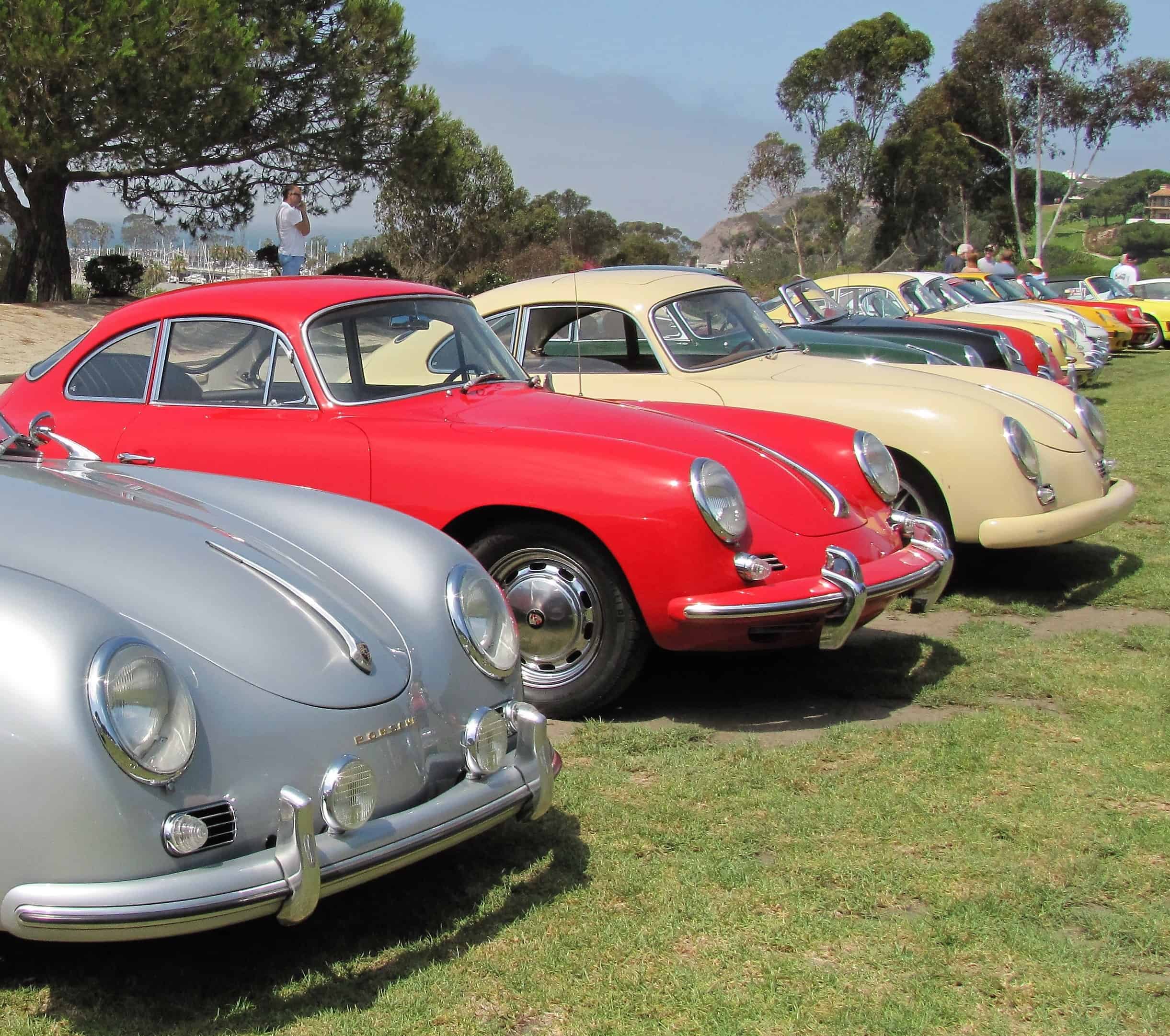 To outsiders, the Porsche 356 is a strange little beast, squat and round and so unlike the sleek exotics favored by most European car buffs. But for those who know them, the little cars originally created by Ferdinand Porsche are simply the most fun on wheels, their unique design and driving character making them a consistent favorite among those who love sports cars.

And so it was, with a gathering of several hundred Porsche 356 coupes, cabriolets, Speedsters, race cars, specials and outlaws, as 356 folks like to call their custom performance versions. They ranged in condition from pristine show queens to battered survivors rich with hard-fought patina.

The show is held at Lantern Bay Park, which sits high on a bluff above Dana Point’s marina and, off to the south, the breaking waves of the Pacific Ocean. On the other side rises the handsome vista of the Laguna Cliffs Marriott Resort and Spa.

John Brunkow of San Clemente brought the 1965 Porsche 356 SC coupe that he purchased new from a Santa Barbara Volkswagen dealer and has been driving regularly ever since. After more than 50 years, the car still wears its original glossy black paint (except for a few minor accident repairs, Brunkow said) and it looked absolutely terrific gleaming in the bright sunlight.

Brunkow keeps the Porsche in impeccable condition, and despite its 105,000 miles, that special care shows in the fresh-looking interior and tidy engine bay. He expresses the viewpoint of many 356 owners when he said, “It really has a lot of class.”

“It’s just been part of my life; it really has,” Brunkow said between giving tours of his all-original, one-owner car to a steady flow of admirers. “When I run into old friends, one of the first things they say is, ‘How is the car?’”

Among the more-unusual Porsches on the field was a 1958 Enzmann 506, a fiberglass-bodied roadster built from a 356. This car is No. 7 of 80 built in Switzerland between 1957 and 1965, said its owner, Erik Ouwersloot, who fielded questions about the rare car with his wife, Jannie.

Ouwersloot pointed out that the builder of the roadster, Dr. Emil Enzmann, incorporated some comfort and safety features that were way ahead of their time, such as seats that are curved to conform with the shape of the human spine, head restraints and a protruding cushion on the passenger-side dashboard to protect the occupant in a crash.

“Dr. Enzmann built these cars to be safe and reliable,” Ouwersloot said.

As often happens, the Ouwersloots – originally from Holland but now California residents – happened on the Enzmann purely by accident 10 years ago. On a trip to Tacoma, Washington, to buy furniture, an acquaintance told them of this interesting old car that was stored in a nearby airplane hangar. The couple went over to look at it.

“We had all this money for buying furniture, but we bought the car instead,” Erik Ouwersloot said.

A few other crowd pleasers at the event, which was free to the public, was a Porsche 550 Spyder race car in restored condition and an outstanding 1952 Glöckler-Porsche Special racer with its hand-crafted body and removable aerodynamic roof. The third Glöckler-Porsche Special, the steel monocoque competition car weighs just 1,130 pounds.

While the show was dedicated to Porsche 356s and their derivatives, off to the side were a number of vintage Porsche 911s and 912s, along with a smattering of Volkswagen transporters and beetles, all of them air-cooled and with their engines in the rear.