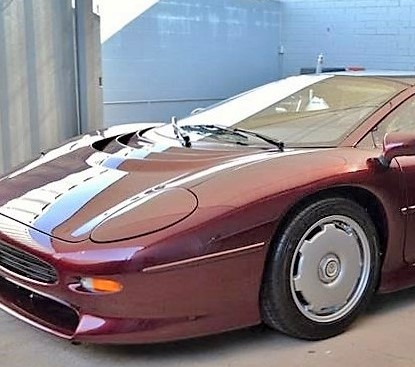 Rarely seen but well-known among supercar enthusiasts, a 1993 Jaguar XJ220 in “time warp” condition will be offered in August at Russo and Steele’s auction during classic car week in Monterey, California.

Aside from being a strikingly exotic example of Jaguar artistry, this XJ220 has been driven just 541 miles and is in essentially brand-new condition, according to the auction description. These are legendary road machines that were produced by Jaguar for just three years in collaboration with Tom Walkinshaw Racing, and one coming up for auction is rare enough, not even considering its ultra-low mileage.

The XJ220 reigned as world’s fastest production automobile until the McLaren F1 came along in 1994. The Jaguar, with a zero-60 capability of 3.8 seconds and top speed of 217 mph, is powered by a 3.5-liter twin-turbo V6 that cranks out 542 horsepower. Just 271 were built, and this is one of just 15 imported to the United States under federal import approval for show and display, according to Russo and Steele.

Russo and Steele hosts its 16th annual Monterey auction August 18 to 20 on the waterfront near downtown. For information, visit the auction website.