New kids on the block: MAG readies for inaugural auction in Reno 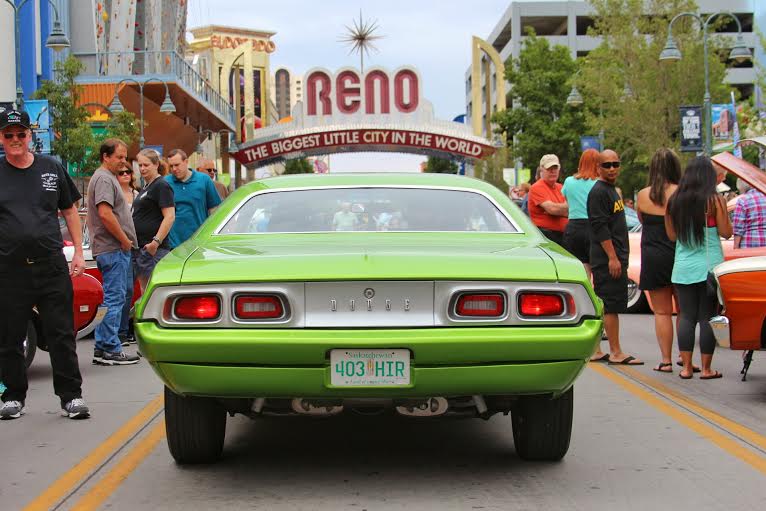 A longing for the innocence, prosperity, and cars of the 1950s and ‘60s verified the nostalgia that saturated the Reno-Sparks Convention Center in 1986 as thousands of people gathered to hear live music from the bygone era. Recognized as Hot August Nights, the event has grown in the last 30 years, still featuring live music, but thought of as one of the must-be-at-events for classic and custom car and hot-rod enthusiasts.

Cars displayed on the street in downtown Reno

Hot August Nights was created with the intention to bring more business to “The Biggest Little City in the World” during the summer off season. Several auction companies have supported that goal over time, including Silver Auctions and, most recently, Barrett-Jackson.

But Barrett-Jackson announced last year that it was moving its summer sale to the East Coast and it wasn’t too long before Hot August Nights issued a news release welcoming newly formed company, Motorsport Auction Group.

“We’re looking forward to working with MAG to build an even bigger and better auction for our participants, and one that’s locally based so our economy is directly impacted,” Hot August Nights executive director Mike Whan said in a news release.

“It’s been a work in progress,” Mike Oberle said of the journey he and his team have taken from idea to reality in just a few months. “But what’s been so cool about this is that we have started out at Square One. Being a new company, we have added and added and we haven’t just settled for a basic auction, we are going after a whole different style of event.”

Oberle said he has worked within the auction industry for approximately 30 years and notes experience in consulting and leasing in addition to attending 15 to 18 collector car auctions a year.

In his experience, he noticed auction companies would use outside sources to produce events in various cities and that is something he did not want to do.

“We are a Reno based, licensed and bonded business,” he said. “Everything is done in house.”

Yaksitch even moved to Reno.

In the last few months, Oberle says MAG has been approached to do auctions for them in California, Oregon, and Washington. Not wanting to get ahead of themselves, Oberle said the MAG team’s focus is on its first event and then building the company.

“I’ve been going to auctions for so long, and if you want to have a business like this that is going to be long standing, you must take care of your customers and make sure they are your first priority or you won’t survive,” he said.

Oberle added that trust is another key component. “When someone entrusts you with their $100,000 car, customer service is paramount. They trust that their vehicle will be well represented, sold, and the process will run smoothly.”

Oberle said an auction “is pretty much ran like a dealership. I mean, the internal part is pretty similar except you’re selling 400 to 500 cars in three days instead of over six months. It’s a much faster pace.”

With the event days away and in conjunction with Hot August Nights’ 30th anniversary, Oberle admits he is feeling pressure. “I have the highest respect for Barrett-Jackson, and its big shoes to fill coming in after them. People are expecting a lot, somewhere between how the auctions used to be and Barrett-Jackson.”

In addition to action on the block, the event will include displays featuring biplanes, custom cars, vendors, and bikes from a vintage motorcycle club. MAG is also a sponsor of the Hot August Nights Cup. The top 10 finalist cars will be displayed in the convention center.

“We want everyone to be able to come and enjoy the event, not just those who want to buy or sell a car,” Oberle said, adding the auction will include a full-size barn within the convention center dubbed “Barn Find Garage.” The garage is sponsored by Summit Racing Equipment and will be limited to “true barn finds” set to sell at no reserve. Buyers of those cars will a receive an in-store Summit Racing Equipment credit. “We want to go outside of the box with things like that to be different,” Oberle said.

Oberle says one of the things that continues to amaze him is the variety and quality of cars consigned for the premier event, such as the GM Futurliner, some high-end street rods, and original big block muscle cars. Oberle attributes the diversity to his experience in the industry and to Marty Hill, who Oberle says is one of the most recognized ring men in the country.

“I know a lot of auctioneers in the industry and I have known Marty for some time as he does classic car auctions. So my partners and I sat down with him and asked him to assemble an auctioneer team for us. With his help we pulled the top guys from all the auctions” Oberle said.

He added that in addition to gaining a talented team, the auctioneers bring their established clients to the show.

“This is our passion,” Oberle said. “All of us love classic cars and have always been in the classic car industry. It’s just something we love doing and none of us are afraid of working to reach our goals. Running a successful auction requires long hours and hard work.”