LeMay hosts motorcycles during ‘The Meet’ 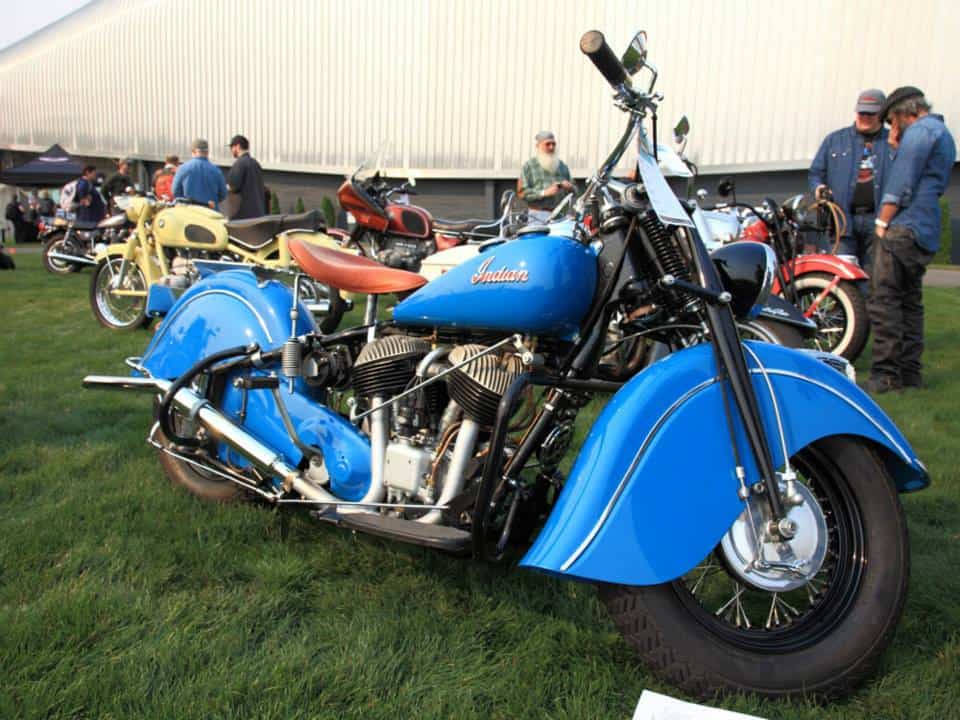 Hundreds of vintage motorcycles and scooters will be displayed Saturday on the Haub Family Field at the LeMay – America’s car museum in Tacoma, Washington, for their annual vintage motorcycle festival, The Meet.  The museum anticipates nearly every brand in motorcycle history to be represented alongside various vendor booths and food trucks. Other highlights include free seminars and performances by the Seattle Cossacks Motorcycle Stunt and Drill Team.

The following day, a motorcycle cruise leaves from ACM heading towards Mt. Rainier by way of several back roads before returning to the museum. The drive has been organized by the Vintage Motorcycle Enthusiast Club and is open to everyone, with all years, makes and models of motorcycles and scooters.

Vintage Honda motorcycles at ‘The Meet’

Saturday and Sunday the Owls Head Transportation Museum in Owls Head, Maine, is set to hold its Wings and Wheels Spectacular aerobatic and WWII Warbird air show. Show highlights include rides in the museum’s airplanes, and classic and collector vehicles will be on display on the museum’s runway.

This weekend, the AACA Museum holds the Upshift Summer Bash car show from 10 a.m. to 4 p.m. The show benefits the Drive for Independence, an organization that works to give those with disabilities their own accessible transportation. The cost is $25 to show and spectators get in free. On October 6 and 7, the Museum holds “Cars & Coffee” in its “secret garage” from 7:30 until 10 a.m. Donuts and coffee will be served.

Saturday, the Buick Club of America celebrates its 50th anniversary with the Buick Nationals at Allentown, Pennsylvania. The big show will be open to the public from 9 a.m. until 3 p.m. at the NB Center for American Automotive Heritage compound across from Coca-Cola Park. All entry donations will benefit the America On Wheels automotive museum in Allentown.

On Sunday, the Petersen Automotive Museum holds its monthly Breakfast Club Cruise-In starting at 8 a.m. in Los Angeles, and celebrates Ford Motor Company’s landmark innovations with Ford owners and clubs at the cruise-in.

The British Motor Museum in England anticipates 600 light commercial vehicles such as pickups, ice-cream vans, campers, taxis, hearses and police cars to show up for the museum’s Classic Van and Pickup Show, set for August 7. The museum holds the “Buses Festival” on August 21, set to feature up to 100 restored, vintage and modern buses and coaches.

The Museum holds its sixth annual Retro Truck Show, September 10 and 11, featuring approximately 250 trucks produced between 1960 and 2000. Other event highlights include a swap meet, indoor model show, food and drinks, and a children’s bounce castle.

On August 12-14, the Auburn Cord Duesenberg Automobile Museum and the nearby National Auto & Truck Museum in Auburn, Indiana, play host to the Checker Cab Club, which will display its vehicles in the new Education & Exhibit Plaza.

The National Corvette Museum celebrates its 22nd anniversary in conjunction with “R8C Museum Delivery” over Labor Day weekend, September 3-5.  The anniversary and R8C include car shows, seminars, road tours, and the Corvette Hall of Fame Induction ceremony. Bob Bondurant, Ralph Kramer and the late Donna Mae Mims will be inducted.

The California Automobile Museum in Sacramento hosts “Cruise Fest on Fulton Avenue” on September 10. Cruising runs from 4 to 6 p.m. with other festivities continuing through 8:30 p.m.

The Seal Cove Auto Museum in Seal Cove, Maine, holds a murder mystery dinner August 7 from 6 p.m. to 9 p.m. The dinner includes drinks, rides in antique cars, prizes to the winner, and guests are encouraged to dress in 1900s-1920s costumes.

The Simeone museum holds a “Foundations of Photography 104” class Saturday instructed by Andrew Taylor. The class will explore the art and science of white balance and color temperature. On August 6, the museum hosts a discussion as a tribute to Penske Racing with Karl Kainhofer, author Gordon Kirby and others, and gives guests a look at the 1968 Sunoco Team Penske Camaro race car.

On August 13, the museum hosts driver Andy Pilgrim, who will present a talk focusing on his racing experiences with Porsches, highlighting his championship winning season in 1997 with Allan McNish driving the stunning Porsche 911 GT1.

The British Motor Museum hosts a family festival day Sunday with art- and science-based activities, including how to make a Shawn the Sheep clay model or drum with car parts with local musicians.

The AACA Museum offers a “Build-A-T” workshop for children 8-12 years old to build a wood Model T pickup truck under the supervision of an educator. The workshop takes place August 6 from 10 a.m. to noon.

Glenn Oyoung, one of the authors of C is for Car is holding a reading August 6 at the Petersen Automotive Museum in Los Angeles. The book is a vehicular alphabet book, inspired by the museum, and visually guides children through different styles and uses of cars. Following the reading is a short tour to see some of the museum’s cars that are seen in the book.

The National Corvette Museum in Bowling Green, Kentucky, hosts a High Performance Drivers’ Education Program on August 27-28. Participants will receive classroom and on-track instruction at the NCM Motorsports Park. Cost is $485 for the two-day program.

The British Motor Museum celebrates the British car from July 23 through September 4. Workshops will be held each Tuesday and Thursday with activities including building British cars with Legos, creating your own card Land Rover, Mini or E-type Jaguar, and creating a car out of balloons.