Mecum ups the game for its motorcycle auction in Monterey 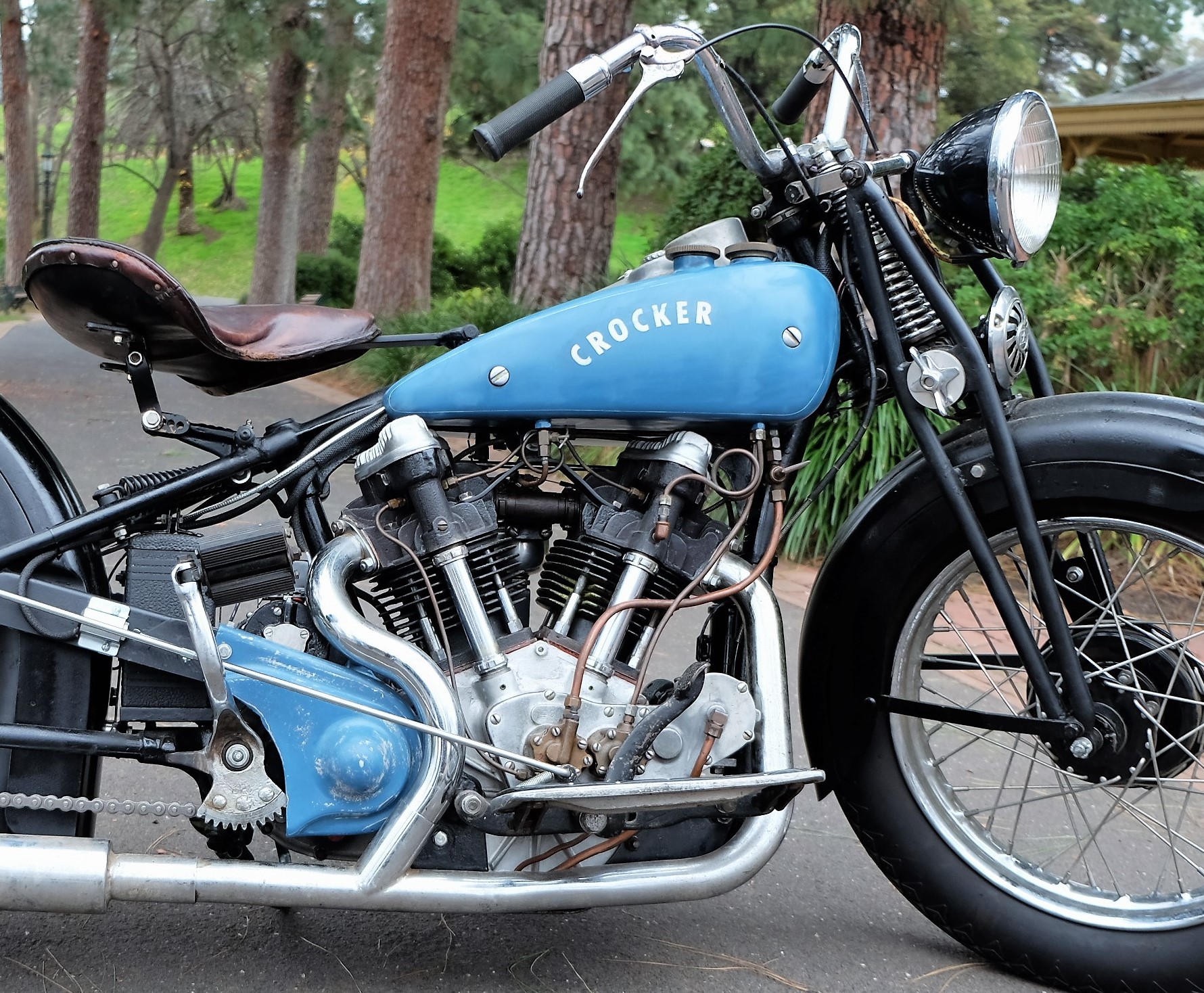 A rarely seen 1938 Crocker, a U.S. bike with a V-twin engine, is the star of the auction | Mecum Auctions photos

Ron Christenson speaks with fervor about classic motorcycles, his stock and trade as president of Mecum MidAmerica Motorcycle Auctions. He’s a lucky man who has parlayed his passion into a fun and lucrative business.

Christenson started MidAmerica motorcycle auctions in 1989, he said, after several years selling collector cars. In no time, it became obvious that the collector motorcycle market was a valuable niche he found more enjoyable than auctioning automobiles. It eventually become his company’s full-time endeavor.

About three years ago, Mecum Auctions bought Christenson’s motorcycle business, “but I still run the whole division,” he said in an interview with Classic Car News. The change has been beneficial, he said, because he now has the time to focus on customers and their motorcycles, which is the part of the business that he relishes.

“I’ve looked at probably 1,500 motorcycles in the past few months that will come up for auction in the next year or two,” Christenson said. “I’m very happy that I have time to spend with these customers.”

That focus comes to full fruition at Mecum’s auction in August during Monterey Car Week in northern California. The motorcycle division has upped its game, Christenson said, with fewer bikes, but all of them collector items in excellent condition.

“I brought this motorcycle idea to Monterey in 2008,” he said, speaking of his pre-Mecum days. “I decided at that time that it had to be upper-end motorcycles because the typical attendee of that venue wants to add quality to their collection. And I know the car people love the old bikes.

The 1935 Brough Superior comes with an Alpine sidecar

“So Dana (Mecum, president and founder of the auction) and I decided that this year, we were going to limit it to 50 motorcycles, a nice array of them, but really hand pick them. And that’s not too difficult because Pebble Beach/Monterey has a very good track record of attracting quality bikes. We had no problem coming up with 50 bikes. And it’s the best that I could find.”

Actually, it came out to 52 bikes, compared with about 90 offered at the sale last year, with the motorcycles still auctioned in the same venue as the collector cars. After the 2015 auction, Christenson and Mecum crunched the numbers and discovered that of the very best motorcycles offered, nearly all of them sold, while lesser ones had a lower sales rate.

“That told us, let’s present what they really want, with not a lot of duplication,” Christenson said.

Pre-auction estimated values for the motorcycles this year range from $10,000 to $450,000, with quite a few great bikes available at the lower price range, many of them British bikes from such popular brands as Triumph and BSA.

A 1968 Triumph 650 Bonneville could sell for a modest price

But the most desirable motorcycles at the Monterey auction do command strong values, including:

• A rare 1938 Crocker Small Tank, a handsome V-twin classic with a 61 cid engine and the raw, purposeful styling of the era, built to compete with the more-established motorcycles from Harley-Davidson and Indian. Restored with an eye on retaining its character and patina, the Crocker is in great running condition, Christenson said. Its estimated value of $300,000 to $350,000.

Interest in vintage motorcycles has climbed in recent years, as have prices, Christenson said, although there are still plenty of bargains out there compared with classic cars. Another positive feature of motorcycles is their compact size, allowing them to be kept in an otherwise full garage.

“Just say the typical collector has a garage or building they have their 20 cars in, and they can’t squeeze any more cars in it,” he said. “But they can fit a couple of new bikes. Most boys have their buddies over. They’ll see the Triumph when it’s just bought, and they’ve seen all the Corvettes and stuff, and before you know it, he’s back to buy another one.”

The 1910 Harley-Davidson has a single cylinder and belt drive

Over the years of motorcycle sales, there have been two brands that have been standouts for their high sales rates, he added, “two makes that have a nearly 95 percent sales rate since I started in 1989.”

Those two are BMW, with a small but strong contingent of dedicated collectors, and the British brand Norton, whose 750 and 850 cc Commando models from the ’60s and ’70s are almost guaranteed to sell above the seller’s reserve.

“If they’re taken good care of it, there is a buyer waiting for it because it’s all that person wants is that Norton or BMW,” he said, adding, “it’s very difficult to get those Nortons away from their owners.”

That could be why there are eight BMWs offered at the Monterey auction but only one Norton.

A major problem when a desirable BMW or Norton has been consigned is to actually get it to the auction to be sold, he said, “because once they decide to sell it, they start talking with their friends, and a lot of times I lose them because it doesn’t make it there.”

Another challenge is bringing younger buyers into the hobby, just as it is with classic cars. They’re looking for motorcycles that they remember, Japanese brands and other bikes from the ’80s and ’90s. But there are other forces at work here.

“We have some ideas about what we have to do to attract those millennials: the British choppers,” Christenson said, referring to the custom motorcycles with their elongated front forks, tiny fuel tanks and layers of chrome trim. And because of the heightened interest, the market for them has evolved.

“If you would have brought me a Triumph chopper a few years ago, it would have sold for 3 or 4 thousand,” he said. “Now we are consistently getting $10,000, and they are creeping up to the price of a restored (Triumph) Bonneville. And it is definitely younger buyers.”

As well as being a showplace for great motorcycles, the Monterey auction is part of the effort to spark greater interest in collecting motorcycles among the well-heeled car collectors, Christenson said, as well as further establishing vintage motorcycles as desirable vehicles for investment and enjoyment.

“We realized that we had to bring car people into this to get these bikes sold,” he said. “The market on everything is slipping a little bit, but we have the influx of the car people, and we’re trying really hard to introduce the kids to these motorcycles.”

Just one Norton, a 1975 Commando, will be offered at auction

As with most areas of the collector-vehicle hobby, the owners of the cars and bikes are the most fun factor in running such a business, he said. With the motorcycles, you have a more-knowledgeable base of customers “who look at it as a hobby, and they go to the auctions to have a fun time.”

Christenson said that in the coming weeks, he’ll be engaged in his favorite part of the business, off to the East Coast to look in on collectors who have a total of about 300 motorcycles. Many of them are being consigned by senior motorcyclists.

“In 1989, a good share of our customers were 45-55 years old,” he said. “Those same customers have the same bikes they bought from us back then, but now they are 60 to 80 years old, and they’re calling me to sell the motorcycles.”

Part of the reason for auctioning them off is to not encumber their families with selling their motorcycles after they’re gone, especially those with large collections.

The Mecum motorcycle auction takes place at the same time as the collector car auction, August 18-20, at the Del Monte Golf Course in Monterey. For information, visit the auction website.