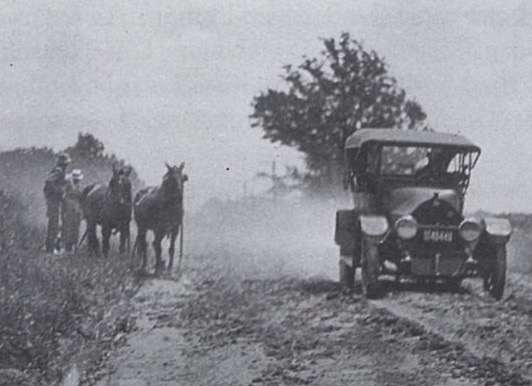 Editor’s note: It was in July, 1916, that President Woodrow Wilson signed the Federal Aid Road Act, establishing a national policy of providing federal aid for highway construction and maintenance. In so doing, a uniform system of roads was established and helped to further usher in the golden age of American motoring. The following article was produced as part of the act’s centennial by the Historic Vehicle Association.

At the turn of the twentieth century, the motorcar was still largely perceived as a novelty item or, at the very least, something designed only for the wealthiest of Americans. Yet, as the century progressed and technological advancements helped make the assembling of automobiles more efficient and thus more cost effective, more and more ordinary citizens suddenly found themselves able to make the leap from horses to horsepower.

The intervening years, however, would see a great deal of political in-fighting with regard to how best to proceed. The formation of the American Automobile Association, along with several other auto clubs, helped bolster the want and need for a more efficient and better constructed series of interstate roadways that could then aid in not only the spread of commerce, but also help with the dispersing of population density.

But these leisure motorists were met with resistance from farmers and other state officials who saw the roads as a practical concern needed only during harvest time and for transportation of goods to market and, thus, only requiring state-specific regulation.

Driving change: But the growing popularity of the automobile with the American public, especially in the wake of Henry Ford’s introduction of the low-priced Model T in 1908, soon found favor swinging more toward the general motorist.
Unfortunately, these eager new drivers found themselves faced with a system of increasingly rutted and, in many places, impassable roadways. All were maintained on either a state or local level and, in the majority of cases, could only be generously described as being a road.

The establishment in 1914 of the American Association of State Highway Officials helped lay the groundwork for what was to come by affording states a voice to advocate for a national road improvement program.

Finally, in 1916, after years of grumbling about the state of the nation’s roads, it was decided that something would have to be done on the federal level in order to accommodate the booming automotive industry and wellspring of wanderlust the automobile inspired in American drivers.

A Presidential push: The presidential election of 1916 found incumbent candidate Woodrow Wilson taking up the cause of better roadways. Wilson went so far as to openly state his intent to improve the nation’s roads by making it part of his party’s platform.

With America’s involvement in WWI having become unavoidable by the following year, the timing of this initiative would prove less than ideal. Because of the war, the newly formed federal-aid road program found itself not only facing budgetary restrictions and an insufficient infrastructural support system, but also, and more importantly, an overwhelming shortage of manpower. And if things couldn’t get any worse, because of railways that soon found themselves unable to keep up with the demands of military shipping, trucks were soon employed to pick up the slack.

Cutting through the red tape: America’s commitment to the war effort meant it would be some time before the full extent of the country’s damaged roads and construction/maintenance needs could be assessed. Regardless, President Wilson signed the Federal Aid Road Act into law on July 11, 1916; thus, setting a new precedent for federal oversight of the nation’s roads.

By 1917 each state had its own highway agency to help administer the funds provided by the federal government. Yet the existing act had only allocated some $10,000 per mile, far short of the required amount to help support the teams and infrastructure needed to properly do the job.

It wasn’t until the Federal Aid Highway Act of 1921 that many of the initial act’s faults were corrected and, until the 1930s, many of the nation’s highways remained unpaved.

But this foresight on the part of early automobile proponents helped ensure the continued expansion of both the national populace and the automobile industry as a whole. In this they became mutually dependent and integral in shaping much of the modern era.

The ensuing decades would see the nation’s highways and byways constantly changing, but the groundwork for our modern system of roads was laid 100 years ago this month.