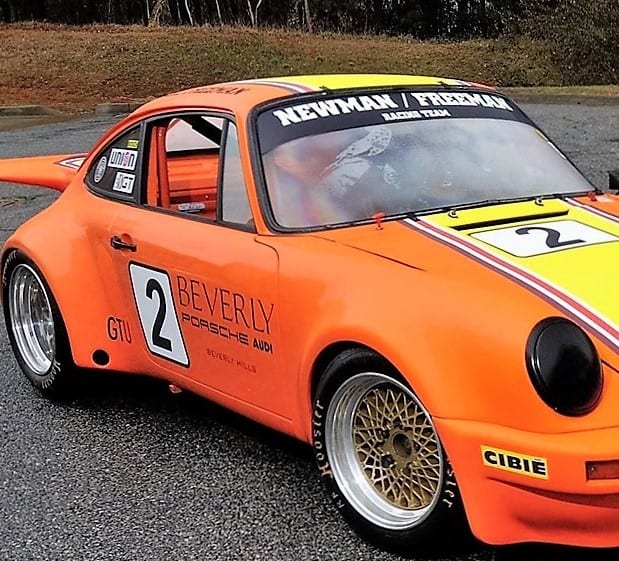 A 1974 Porsche 911S competition car once owned and raced by Hollywood film legend Paul Newman will be among the pack of Porsches offered by Rick Cole Auctions next month in Monterey, California.

Driven by Newman and Bill Freeman in the 1977 12 Hours of Sebring, the Porsche marked the start of the Newman-Freeman Racing partnership. The late actor’s racing career continued through his participation at Daytona in 2005.

The 911S has been comprehensively restored to its period racing fettle including its professionally rebuilt 360-horsepower, 3.0-liter flat-six endurance-racing engine, according to the auction company, which adds that the car is highly documented and prepared for vintage racing.

“Carrying exceptional and well-known history including entries at top racing events, this former Newman-Freeman Racing Porsche 911S is a compelling find,” the auction-catalog description reads. “While virtually any vehicle with Steve McQueen provenance enjoys the ‘McQueen Premium’ in today’s collector-car market, this 911S marks the true start of Paul ‘King Cool’ Newman’s long-term racing career that would include second at Le Mans and continue to his last race – aged 80 – at the 2005 24 Hours of Daytona.

“It all had to start somewhere, and it did with Newman-Freeman Racing and this very car.”

Another Paul Newman race car will be offered at Monterey in August by Gooding and Company, a 1979 935 in which Newman shared driving duties at that year’s Le Man’s 24 with team owner Dick Barbour and Rolf Stommelen, finishing second overall.

The Rick Cole auction will offer nine Porsche 911s, including the Newman race car, at Monterey. Others include a 1967 911S coupe originally owned by veteran race driver Wilhelm Sebastien, who co-drove a Mercedes-Benz SSKL in the 1931 Mille Miglia; a 1973 911S coupe from the last year before power-robbing emission controls and restyling with heavy five-mph bumpers; and a 1974 911 Carrera coupe, a desirable European-market version with the 210-horsepower 2.7-liter engine.

Rick Cole was the first to stage a collector car auction in Monterey during the week of the Pebble Beach concours and vintage racing at nearby track. Cole returned in 2014 with a unique auction setting that differs from the traditional “live auction” format; the auction cars will be displayed at the Marriott hotel in downtown Monterey, with bidding taking place on a continuous basis via smartphone from August 19 through 21.