Collector car market heats up as we head to Monterey 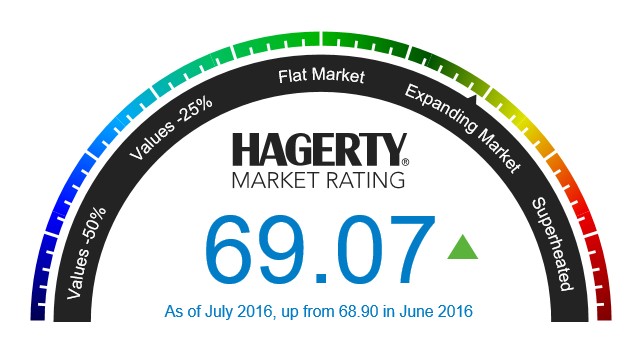 For the first time in four months, the Hagerty Market Rating posted a “sizable increase,” according to the classic car insurance and valuation-tracking company. The July rating of 69.07 is 0.17 points better than the final figure for June.

“In times of economic uncertainty, such as those illustrated by Brexit last month, the collector car market has shown ongoing strength, as buyers continue to seek out and invest in quality cars,” McKeel Hagerty, chief executive of the family-owned company, said in a news release. “The emergence of ‘modern classics’ from the 1980s has continued to be a major trend with buyers along with long-standing favorites like the 1948-53 Cadillac Series 62 and first generation Mercury Cougars.”

According to the monthly Hagerty pulse of the marketplace, auction activity posted a 2 percent boost in the volume of cars sold and a 1.8 percent increase in the average price of those sale.

Of note, the release said, 1948-53 Cadillac Series 62 cars have shown a 93 percent jump in sales prices in the last 12 months, while 1962-76 Dodge Darts experienced a 53 percent bump in price over the same period. In addition to the Series 62 Caddys, 1979-85 Eldorado prices have increased 45 percent in the last year.

Also showing renewed life were private sales, and after three consecutive months of decline. Hagerty said the boost in private sales can be traced in large part to an increase in the number of cars selling for more than their insured values.

Also dragging down the numbers were such “correlated instruments” as a boost in the price of gold.

Hagerty shares its ratings midway through each month. That means the results of the auctions taking place in the middle of August on the Monterey Peninsula won’t register on the index until the September report. However, the uptick in the July figure and the strength of the various catalogs for the Monterey sales would seem a source for optimism for those buying and selling.