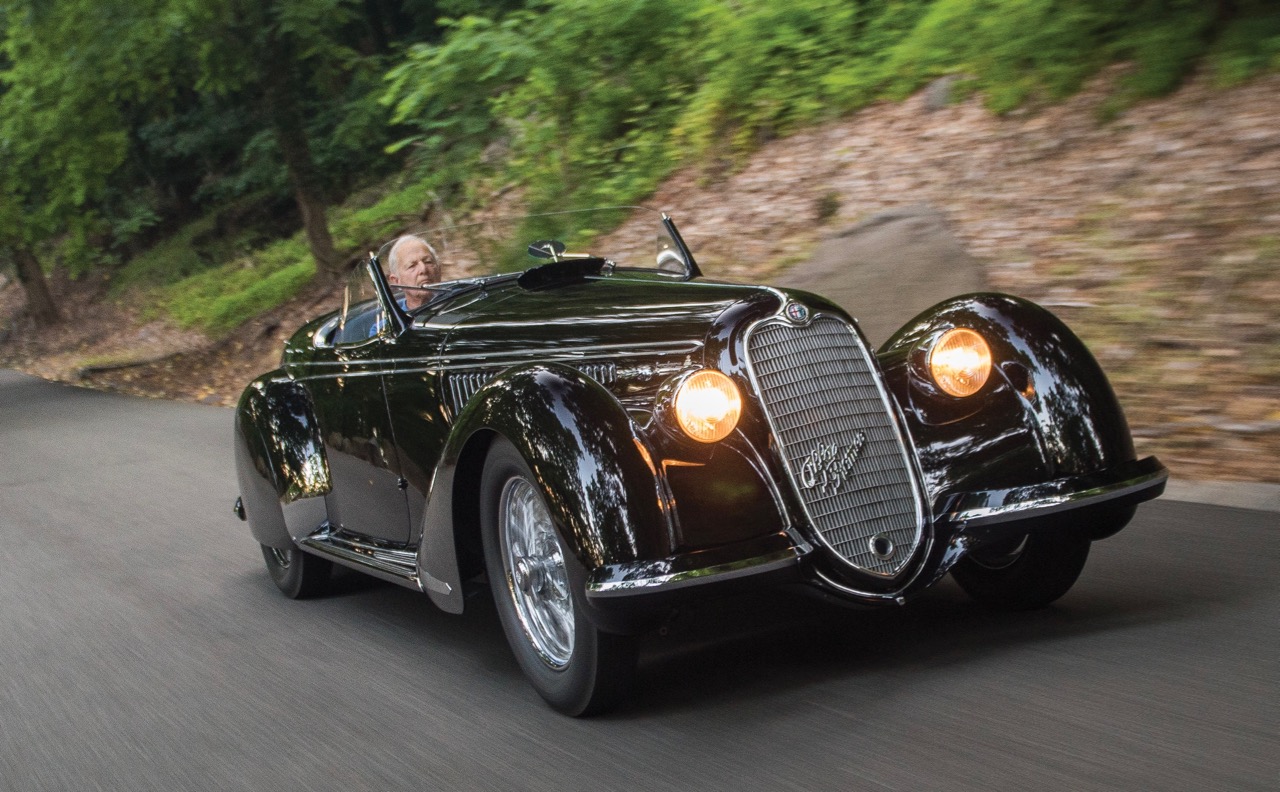 Sam and Emily Mann are up there at the pinnacle of American car collectors. Vehicles from their collection have won best of show honors at concours across the country, including four times in the past 25 years at Pebble Beach, where only the late Bill Harrah achieved a similar record and where only J.B. Nethercutt exceeded it with six such trophies.

But as years advance, priorities change and the Manns have decided to offer five cars from their collection for sale next month at the RM Sotheby’s auction in Monterey, California, where the auction house anticipates that the Manns’ 1939 Alfa Romeo 8C 2900B will set “a new auction benchmark for a pre-war automobile.”

RM Sotheby’s has set a pre-auction estimated value on the Alfa of $20 million to $25 million. Starting today RM Sotheby’s is showcasing the car in Southeby’s New York headquarters until it has to leave for the auction in northern California.

Also being offered from the Manns’ collection are:

“These five examples represent some of the finest of their individual models,” Ian Kelleher, managing director of RM Sotheby’s West Coast Division, said in the auction house announcement. “Each has been meticulously maintained and cared for, and exhibits breathtaking presentation. We’re thrilled to have been entrusted with these cars by Sam and Emily Mann; they reflect Sam and Emily’s finely honed eye for aesthetics and design, and will unquestionably be the centerpiece of any important automotive collection.”

Kelleher added that, in particular, “The Alfa 2.9 is a car of peerless engineering and extreme elegance — in my mind it represents the absolute highest echelon of car collecting and is a perfect fit for our sale during the Pebble Beach Concours d’Elegance week.

“From the standpoint of an automotive enthusiast, there is perhaps no more resplendent sound than that of the twin supercharged, dual overhead-cam straight-eight engine of the mighty Alfa 8C at full speed. Without question, acquiring a car of such magnitude establishes one’s collection at the forefront of the hobby.”

In its news release, RM Sotheby’s said the Alfa Romeo 8C 2900B not only represents the ultimate original gran turismo, but is “the Italian equivalent of the Bugatti Atlantique.”

RM Sotheby’s notes that only 32 chassis were produced and the Manns’ (chassis No. 412041) is one of perhaps a dozen Touring Spiders still in existence.

In addition to winning various trophies at concours, “Perhaps the most persuasive testament to the quality of the car’s restoration and subsequent expert care, along with the effortless drivability of the 8C 2900, is the fact that the Manns have spent over 12,000 miles behind the wheel, including seven 8C Alfa Tours between 1999 and 2013, in addition to the Copperstate 1000, the Colorado Grand, the California Mille and the California Classic Rally,” the RM Sotheby’s news release adds.

Of the other Mann cars going to auction: