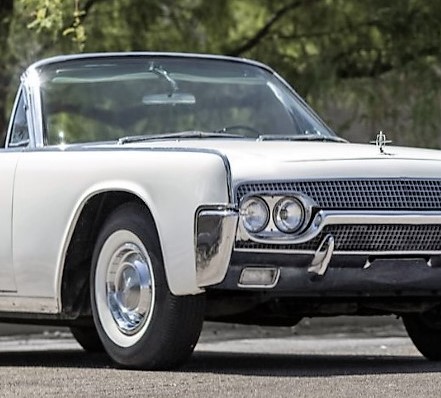 In the sparkling days of Camelot on the Potomac, when John and Jacqueline Kennedy had taken up residence at the White House, Ford Motor Co. smartly lent a new 1961 Lincoln Continental four-door convertible in white to the glamorous First Lady for her personal use.

The historic Lincoln that recalls the excitement and tragedy of the too-brief Kennedy years will be auctioned in Monterey, California, in August at Mecum Auctions sale during Pebble Beach concours week.

Now restored, the Continental has been relieved of the Secret Service equipment that was installed while Jackie Kennedy was using it in Washington, D.C. The car was later purchased by Steuart Ford in Lanham, Maryland, and is documented with a copy of a letter from the vice president and general manager of the dealership.

Mecum has placed a value estimate of $100,000 to $125,000 on the Lincoln, which is about double the value listed in the Hagerty Price Guide for a ’61 Continental convertible without the Kennedy aura.

The Lincoln Continental was completely restyled for 1961 and was a fashion statement in itself, a now-iconic mid-century design that heralded the clean, unadorned styling trends of the era. As Ford had hoped, Lincolns became emblematic of the Kennedy White House, though sadly also forever linked with the Dallas assassination.

The Continental was the subject of an older restoration, according to Mecum, that seems to be holding up well. In gleaming white with a black-and-white interior, the car was kept in its original configuration, including all of its lavish power and convenience features.

Power for the two-ton convertible is provided by a 430 cid, 300-horsepower V8 with a three-speed automatic transmission. The car rides on correct wide-whitewall tires with full wheel covers.

The Mecum collector car auction takes place August 18-20 at the Del Monte Golf Course in Monterey. For information and a list of auction cars, visit the auction website.