BMW will stage its largest centennial celebration outside Germany during Monterey Car Week, when it is the featured marque at the Rolex Monterey Motorsports Reunion; The Quail, A Motorsports Gathering; and at the Pebble Beach Concours d’Elegance. BMWs also will participate in the Legends of the Autobahn concours on the Monterey Peninsula.

As part of the celebration, BMW of North America will stage the world premiere of a concept car as well as a newly restored classic BMW during the week at the BMW Living Legends Garage at Mazda Raceway Laguna Seca.

“Rather than a static heritage display that is typical for the featured marque at the Rolex Reunion, BMW of North America is developing the BMW Living Legends Garage to house a selection of representative racing BMW’s that chronicle the history of the company,” the company said in a news release. “Many of these cars will be actively competing in the racing action so visitors will be able to see, hear and feel the living history of the brand.” 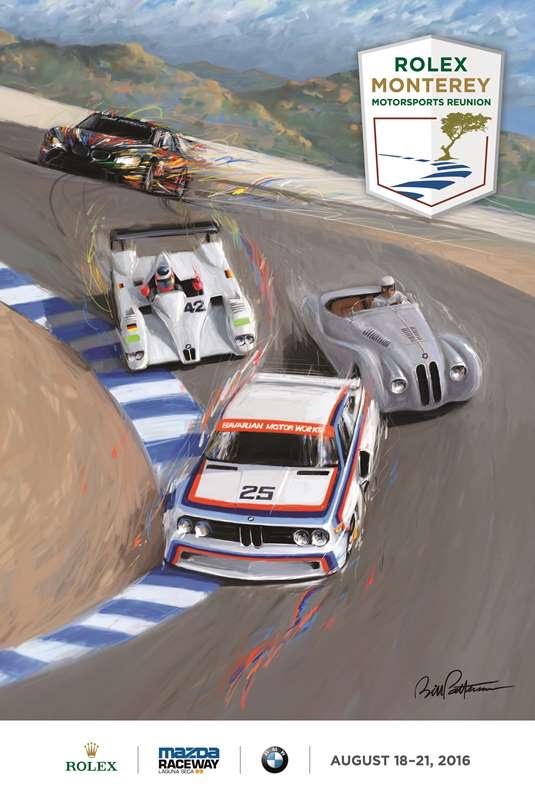 A segment of that history was displayed Tuesday when the raceway unveiled its 2016 Rolex Monterey Motorsports Reunion poster (right), which features artist Bill Patterson’s image of four of the BMWs that will be present for the vintage races next month.

“Patterson led with a big moment in BMW’s illustrious racing history, the winning of the 12 Hours of Sebring with Hans Stuck, Sam Posey, Allan Moffat and Brian Redman in the 1975 BMW 3.0 CSL,” the raceway said in its announcement.

At the unveiling, the track’s chief executive and general manger Gill Campbell called the poster image by Patterson “fantastic.”

“But just wait until these cars make their actual descent during the weekend where enthusiasts can enjoy their true sights and sounds,” Campbell said.