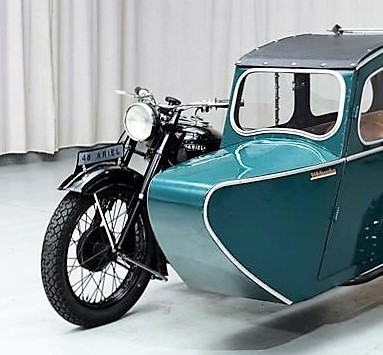 We’ve posted a few stories recently on ClassicCars.com about the joys and relative affordability of collecting vintage motorcycles. Well, here’s a perfect example, a desirable British bike with a charming, enclosed sidecar offered by a high-end classic car dealer at a reasonable asking price.

The Pick of the Day, a rare 1948 Ariel Square Four with a Watsonian sidecar, would be a striking standout at any classic vehicle show as well as a particularly awesome means for cruising the streets and highways.

The Ariel is a 1,000cc road bike renowned for its smooth performance and strong response. Rated at 38 horsepower when introduced in 1935, the innovative four-cylinder engine should provide plenty of gusto for motivating this enjoyable rig. The motorcycle has been sorted, and it runs and drives well, according to the St Louis, Missouri, dealer in the listing on ClassicCars.com.

“Two famous British motorcycling names are joined together in this uncommonly stylish post-war motorcycle-sidecar outfit certain to gather attention wherever it is seen and enjoyed,” the dealer says. “The Ariel Square Four was one of the most glamorous and best-known of British motorcycles and has been described as ‘the smoothest British motorcycle of all time’.”

Watsonian is the most famous name in British sidecars, still in operation more than a century after its founding in 1912 and still building quality sidecars. This classic sidecar has full weather protection with Plexiglas windows and a rollback fabric roof, and tandem seating for two as well as a satchel apparently designed for transporting a small dog.

“The Ariel-Watsonian outfit offered here is a unique combination of pre-war design and post-war execution,” the dealer says. “The vehicle is offered in very good original condition after being part of a private Seattle, Washington, collection since the 1980s.

“The (motorcycle’s) black frame has been repainted and retains the original black seat as well as original trim, badges and hardware, including an RAC (Royal Automobile Club) disc mounted at the rear wheel.  The finish shows nicks and chips as to be expected, with a pleasing amount of patina.

“The Watsonian sidecar is simply a delight, finished in forest green and seating two passengers in tandem, front-to-rear, with access by a hinged door on the curb side.”

The asking price for this vintage rarity is $42,500, which seems like a real bargain compared with a similar-quality collector car. Plus, you would be pretty much guaranteed to have the only one in town.