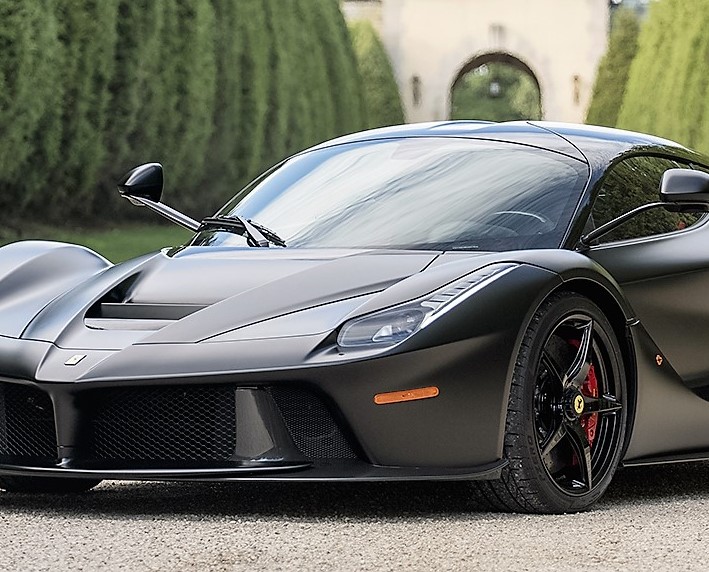 Mecum Auctions are not exactly known as the venues for buying modern ultra-exotic European sports cars, but nonetheless its Monterey sale is bristling with very high-tech offerings from many of the greatest names in supercars.

The hyper performers from Ferrari, Bugatti, Aston Martin, Porsche and McLaren made since the dawn of the new millennium boast stunning horsepower as well as eye-popping styling and design, and they should boost the bottom line considerably for the Mecum collector car sale August 18-20 in Monterey.

The auction also features quite a selection of vintage exotics among its consignments, along with a wide range of less exuberant classic cars.

Highest profile is undoubtedly the rare appearance at auction of a 2014 Ferrari LaFerrari. The carbon-fiber ground missile has been driven just 211 miles, which seems like a waste and a crying shame, but which also raises its potential value enormously. This sexy beast, rated at 949 horsepower emitted from its combination of 6.3-liter V12 engine and electric motors, will rush ahead until it tops out at 217 miles per hour.

The original price tag was $1.4 million, but expect this one to go for more. LaFerraris were sold out before they were produced, so finding one for sale in essentially brand-new condition should open up some fat wallets.

Next up is a little something from Great Britain, a 2014 McLaren P1 that carries the performance torch for the famous racing brand with a 3.8-liter twin-turbo V8 plus electric motors producing a combined 903 horsepower. This one carries serial number 000002, the second car built, marking the earliest P1 sold to the public. It also bears shamefully low mileage at 572, so it remains in pristine condition.

Actually, this car was rebodied by the McLaren factory. Not long after delivery, the owner got wind of the fact that the manufacturer would begin fitting subsequent cars with exposed carbon-fiber body panels. So back it went for the upgrades. The original body, said to be in perfect condition, is included in the sale.

The 2015 Porsche 918 Spyder was upgraded with the Weissach package

The final car in the triumvirate is a modern icon from Porsche, a 2015 Porsche 918 Spyder Weissach that has been driven a comparatively lofty 1,957 miles. At least someone took the opportunity to enjoy it. This top-down überwagen gets 887 horsepower from a hybrid system comprising a 4.6-liter direct-injection V8 and a pair of electric motors. The car has a top speed rated at 217 miles per hour (That number is not so arbitrary; it equates to about 350 kilometers per hour.).

The aggressive styling of the Porsche is dominated by gaping air intakes behind the occupants, atop that gloriously tuned V8. The Porsche was slightly less expensive than the Ferrari or the McLaren when new – at least it was less than a million bucks – but it figures to get quite a bit of attention at auction. In January, a 2015 918 Spyder sold for $1.76 million (including auction fee) at Barrett-Jackson’s Scottsdale sale.

From there, here are four other modern exotics ready to rock at Mecum:

• A 2006 Porsche Carrera GT, the high-performance precursor of the 918 Spyder, powered by a 605-horsepower V10. Another never-used garage queen showing just 152 miles.

• A 2006 Bugatti Veyron 16.4, its numbers signifying a quadruple-turbocharged W16 engine, which displaces 8.0 liters and churns out an astounding 1,001 horsepower.

• A 2011 Ferrari 599 SA Aperta, a special edition of the GTO performance car powered by a 6.0-liter V12 delivering 661 horsepower. Just 80 of these were built to celebrate the 80th anniversary of coachbuilder Pininfarina, which has been closely associated with Ferrari design throughout the automaker’s history.