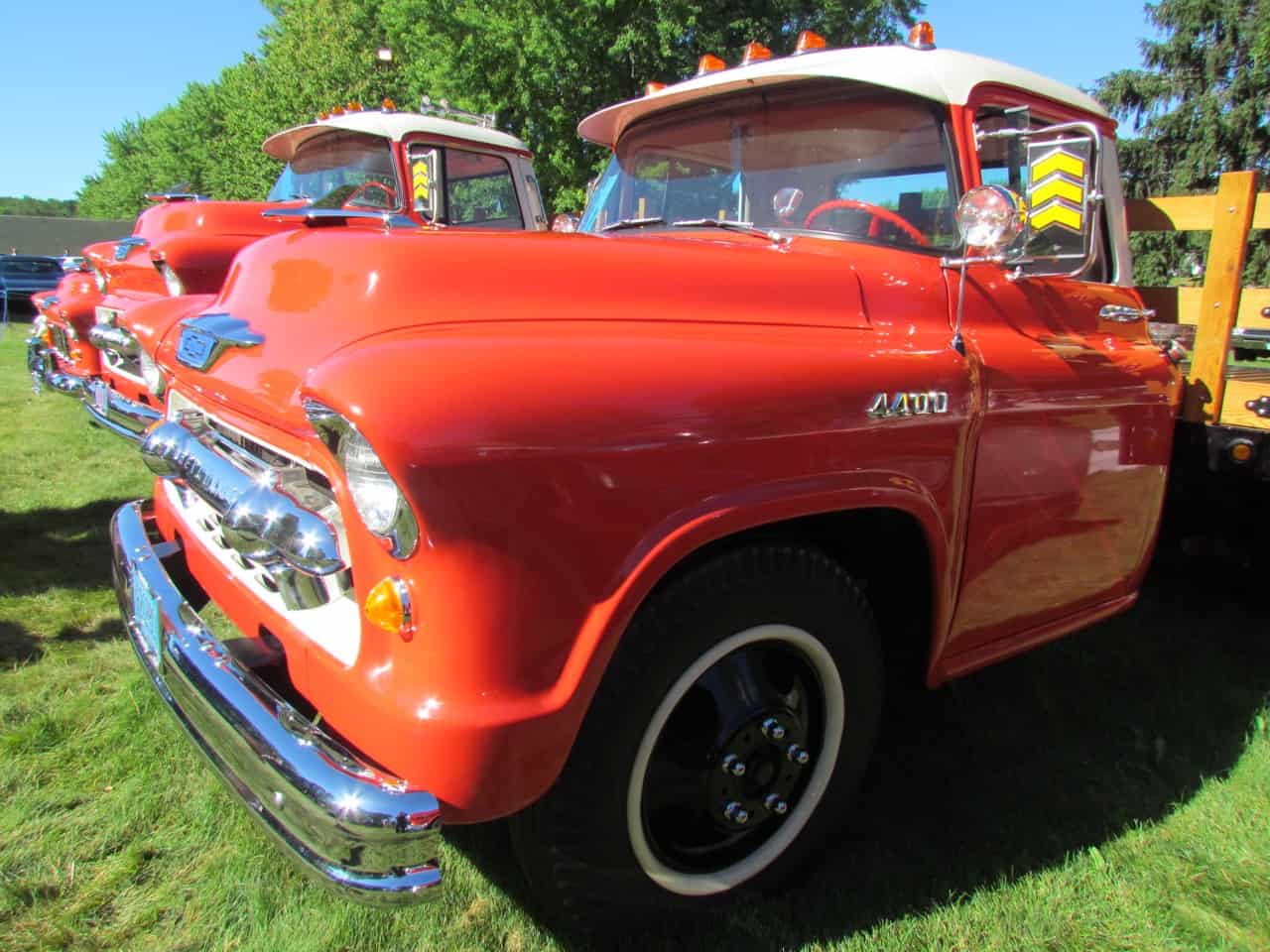 Daryl Skaar was working on his family’s Wisconsin farm late one Saturday afternoon when a group of guys from the nearby Janesville automobile assembly plant cruised past. One of them driving a then brand-new 1955 Chevrolet convertible.

“I bought one when I was in high school,” he said, adding that he sold the car when he went into the Army, promising himself at the time that, “When I get the means, I’ll buy it back.”

By the time Skaar returned from military service, he was busy making a career and the search for a ’55 Chevy was delayed. He went to work first at Minnesota-based 3M and later on the East Coast at Lucent Technologies. After retiring for the second time, again as a corporate vice-president, Skaar was back in Wisconsin where, in 1994, he bought not his high-school car but another 1955 Chevrolet Bel Air convertible, which he sent through a three-year, frame-off restoration.

Reverse angle of the five ’55 Chevys

There’s nothing unusual about someone restoring a ’55 Chevy convertible; they are iconic among car collectors. It’s just that Skaar didn’t stop there.

Last weekend at the 44th annual Iola Old Car Show, easily the most impressive grouping of vehicles I saw was Skaar’s collection of ’55 Chevys, each of them wearing the same Gypsy Red and India Ivory colors as the Bel Air convertible.

He also has a ’55 3800 with a 10-foot flatbed, but its restoration isn’t quite finished, he said. When it is, he’ll launch the restoration of yet another ’55 Chevy, a 3100 pickup now serving as his daily driver.

Although he regularly takes the Bel Air convertible to the big Back to the Fifties show in Minnesota, where he also displayed the 5400 earlier this year, the Iola event was the first time all five of Skaar’s red and restored ’55 Chevys have been displayed together.

Oh, and all were driven to the show; no trailer queens here.

But it isn’t just ’55 Chevys that Skaar collects. He also has a 1965 Impala 2-door hardtop, a 1929 Chevrolet fire truck and a 1949 6400 milk truck can van, the last as a reminder of his childhood on the farm and his chores, which included milk deliveries.

And it’s not just Chevys in Skaar’s collection. He also has a 1950 Oldsmobile Rocket 88 convertible and a 1967 Jeepster Commando, a rare factory-built convertible with a Continental kit, he points out.

Although he always was interested in cars, Skaar didn’t start collecting until his second retirement, after his wife suggested he needed something to do that would get him out from underfoot in the house.

“Being born and raised on a farm, you have to do all own your welding and mechanical work,” Skaar said.

He noted that while he didn’t get to exercise those skills during his executive career, he’s getting ample opportunity to put them to use on his ’55 Chevys and other collector vehicles.

Scenes and seen at the swap meet: