A salute to classic car community heroes and heroines 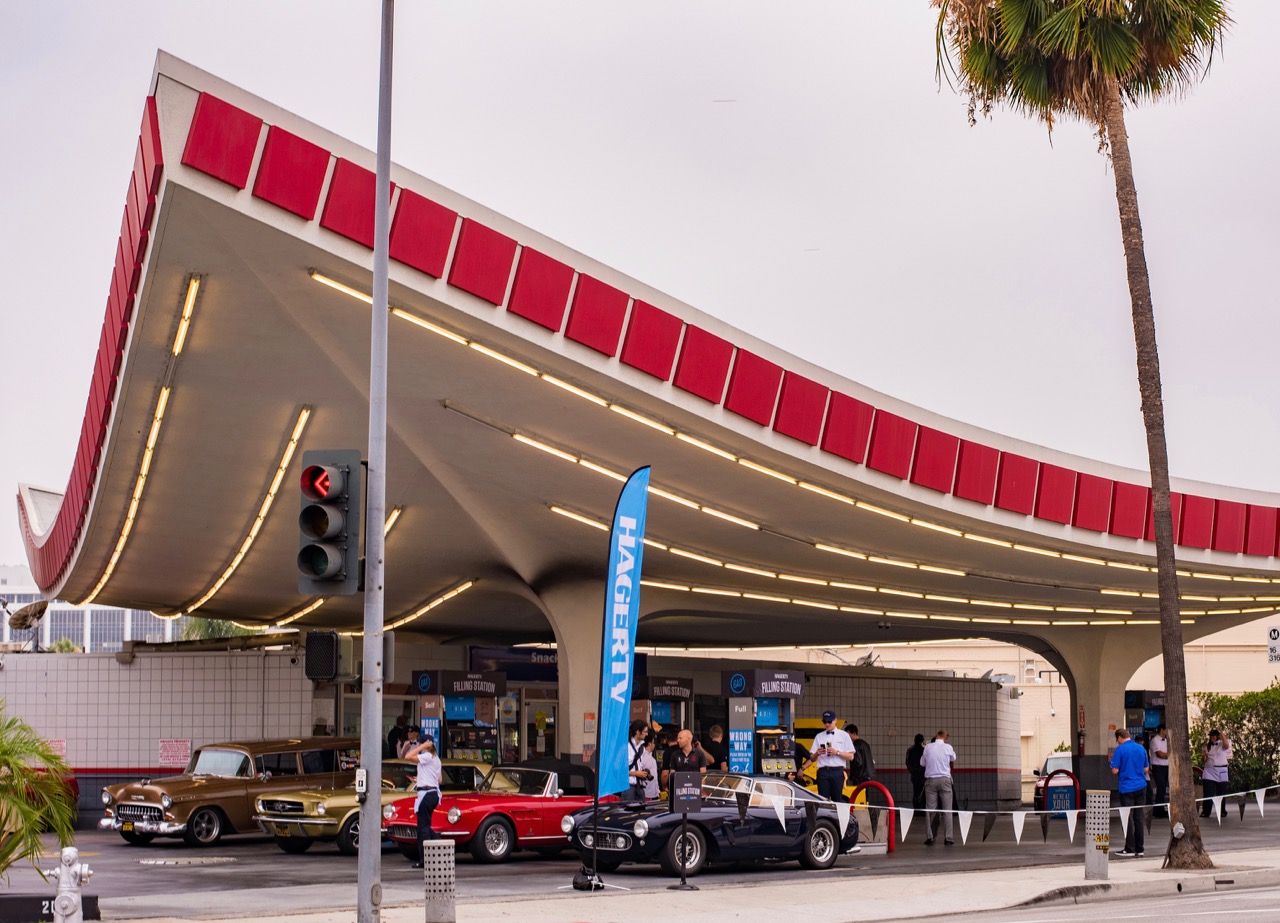 Last week, the classic car hobby celebrated its seventh annual Collector Car Appreciation Day, a day staged under proclamation of the U.S. Senate, promoted by SEMA (the Specialty Equipment Marketing Association) and involving a series of car shows from coast to coast and border to border.

And if you are fortunate to live in the right area, you could celebrate with Hagerty, the insurance and valuation provider, which again rolled back the clock by taking over a service station — this year an iconic structure in Beverly Hills, California — and offering a full-service fill up of your classic car’s tank at whatever the price of a gallon was when the car was produced.

“This day is about celebrating America’s love affair with the automobile and more importantly encouraging people to get their cars out of the garage for a weekend of summer cruising,” said McKeel Hagerty, chief executive of the family-owned company.“This event transforms the owners back to the time their car was new and full service gas stations were the norm.”

ClassicCars.com got into the celebration two ways this year, sponsoring a car show in Arizona and, for the second year in a row, asking you, our readers, to submit your nominations for the people who should be recognized as Classic Car Community Heroes or Heroines.

“Collector Car Appreciation Day is a great opportunity for us to celebrate and honor the people who make this hobby tick, and give back in so many ways to the community,”  said Roger Falcione, chief executive of ClassicCars.com

Speaking of Beverly Hills, Jay Leno was nominated because of all he does for the hobby (much of it anonymously, or at least without any public fanfare) — and for the attention he brings to the classic car community.

And Jay’s in very good company this year as we salute the other heroes and sheroes:

Ronnie Reed of Maricopa, Arizona, was nominated because he donated his dream car, a 1977 Chevrolet Caprice, to the Walk by Faith raffle to raise money for the construction of a new church and facilities to provide empowerment workshops, day care and pre-school facilities and a community food pantry and kitchen that will provide meals for children during non-school months.

Reed is in the vehicle restoration business. Another nominee involved in the professional side of the hobby is Dawn Fisher. Dawn and her husband Mike own MFC Classic Motors, a 35,000-square-foot facility in northern Michigan where they house their own vintage and race cars and also provide storage space for others. The facility also houses Hammer and Dolly Restoration and the Grand Rapids Auto Gallery. We’ll let Jim Hoffman take it from there:

“On a visit there with my 8-year-old grandson, James, Dawn took the time to show and tell us about their prized possession, with stories of their racing experience, restoring old cars, history of some of the vehicles. My grandson James is now an over-the-top car enthusiast. Dawn let him sit in a few of their classics while telling us about their history. Mike even gave James a cap of an Audi S4 (one of his race cars) and signed it. Above and beyond being kind to us, Dawn totally deserves this award recognition.”

Another nominee involved in the hobby on a professional basis is Nancy Perry of Glendale, Arizona, for the seemingly countless classic and collector car shows she organizes in the Phoenix area (including the one we sponsored as part of Collector Car Appreciation Day). The nomination email noted that, “Nancy is a tireless promoter of all things classic car and truck. She runs car shows and cruises on a weekly basis for the local clubs and organizations. She has run fund-raising events to help those in need. She gives far more than she ever receives and it would be nice to see her recognized.”

Also working hard to enhance the hobby and his community is Jeff Barnes of Joppa, Maryland. “This hero goes out of his way to make sure for the past 10 years we had a spot to cruise without hassle,” the nomination form notes. “Also always doing a real man’s yard sale for the car guys and has helped raise thousands of dollars for local charities. This is a hero to the car world in my view….”

In our’s as well.

Another “nominee” who organizes car shows is actually a trio — Hugh, Matthew and Jeffrey O’Donnell of West Mifflin, Pennsylvania, who staged their first cruise-in in 1985 and still do three shows a week at various venues and an annual Mack Truck show. The O’Donnells’ shows draw well, in part because they’ve secured products from car-care companies to give to their shows’ participants.

Another nominated retiree is Harold Thomas of West Cliffe, Colorado, recommended by a family member, who explained that Harold worked as a mechanic in Kansas for many years, fixing everything possible “and only replaced what absolutely could not be fixed.” In retirement, he still works on the family’s cars and has begun restoring cars — six of them — doing nearly all the work himself.

Nominee Michael Keller of Santa Fe, New Mexico, had a very negative experience when he bought his first classic car, so he launched his own website to share what happened to him and to help provide an education for other novices so they wouldn’t make the same mistakes.

Don Adams of Nathrop, Colorado, was nominated, but we think kudos also should go to Richard Stoddard in this instance. Adams won the Production class at the 68th annual Pikes Peak Hill Climb in 1990 in an Eagle Talon, climbing the 12.42-mile unpaved route in 13:50.46. Afterward, the car, with 16,000 miles on its odometer, was stored on a lift for a quarter century when it was sold to Stoddard, who lives in Connecticut, where Adams was born and raised. Stoddard shows the cars as Adams raced it, with Adams’ name still on the car, and thus letting folks back home remember or learn of the native son’s accomplishments.

Also nominated were those who were part of a father/son or even a father/daughter collector car experience:

Bob Peters nominated his son, Brett Peters, of Charlotte, North Carolina, and yes, this is the Brett Peters who works as an engineer for the Stewart Haas NASCAR team.

Here’s what Bob Peters wrote: “Since he was a little boy, my son Brett always liked cars. He began to race them when he was 5. Through the years we traveled around the country racing, microds and go-karts till he was in his late teens. He became a national-class winner three times in the WKA-sanctioning Kart class with several event wins. He always said, ‘Dad, when I am old enough to drive on the road, I would like to have an older Camaro Z28’.

“While traveling to and racing at Charlotte Motor Speedway we saw a Camaro Z28 parked and stored on blocks in a lean-to shed. We stopped to see it, spoke to the owner, who had wrecked it 30 years ago and parked it in the shed, worked out a deal to buy it and the restoration project began. Four years later my son and I had restored this beautiful numbers-matching 1971 Camaro Z28. It doesn’t get driven much now only to cruse-ins and a few car shows. But he is a happy camper.”

Grace Ford nominated her father, Glenn Ford, of North Granby, Connecticut, and in doing so she shared this story of why she sees him as a true classic car community hero:

“I nominate my Dad because, after 32 years of loving and building his 1970 Mach 1, he sold it to help pay for my college.

“Going from Connecticut to California is expensive. I knew it killed him to sell the car he had since he was a teenager so he could find funds to pay to send me to a prestigious university,” she continued.

“I helped him build the car. I actually learned how to install the engine, transmission and put the differential together. This was a learning experience in itself. We even wired the car together (I can now solder!)

“My Dad has helped so many other young folks get familiar with cars. As a result of all of this, I nominate the best gear head I’ve ever met.”