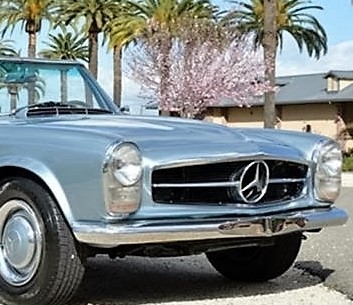 Sell-through rates are a measure of success not only of collector car auctions but of the cars themselves. Ever wonder what percentage get hammered “sold!” among those that come up for sale?

The latest graph from Hagerty collector car insurance and valuation shows the top 10 vehicles with the highest sell-through rates at North American auctions during the past 12 months. They are a motley mix of types and eras, although some patterns stand out, Hagerty says.

“The most common shared attribute is a relatively low sale price,” Hagerty said in its accompanying article. “Half have an average price below $20,000, and only two of the Mercedes-Benzes listed above (the late-’60 early-’70s 280SE and 280SL) really get into the over-$50,000 range.”

Four the 10 top spots are taken by Mercedes vehicles, with every era of SL sports models from 1972 through 1985 represented.

In creating the graph, Hagerty said more than three-quarters of the sales came from Mecum, Auctions America, Leake, Russo and Steele and McCormick’s, with about 58 percent of those through either Mecum or Auctions America. Barrett-Jackson was not included in the calculations since nearly every car is offered at no reserve and since they all sell under that system, including them would heavily skew the results.

The sell-through rate is also a measurement of the gap between sellers’ expectations and what buyers are willing to pay, according to Hagerty.

“At the moment, these are the vehicles for which that gap is smallest,” Hagerty said.